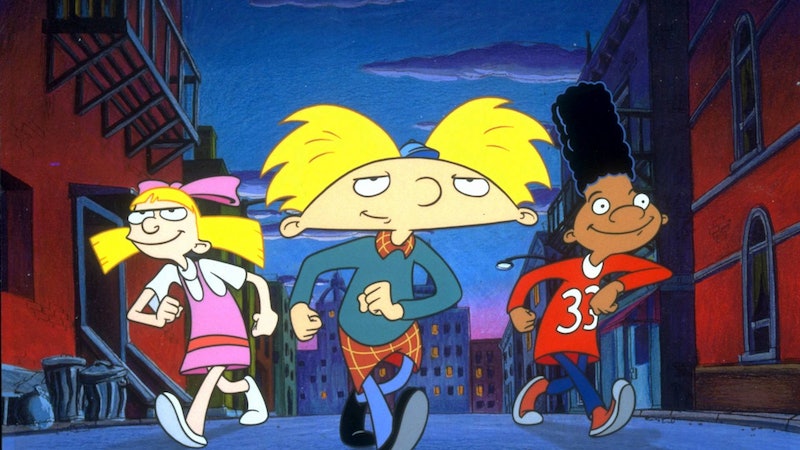 It's been over 11 years since the final episode of Hey Arnold aired on Nickelodeon, and over 13 since fans saw a movie version of the beloved cartoon. Most of us assumed that was all we would ever get of Hey Arnold. While '90s kids are eternally grateful for the recent reruns of the series on TeenNick's new block The Splat, any new Hey Arnold episodes sounded more like a '90s-inspired fever dream than a reality. Miraculously, it seems that this is one dream that actually came true: as Variety reported on Monday, a new Hey Arnold TV movie is headed our way, and it's everything our '90s toon-loving hearts could want.

According to Variety, the new movie will air on Nickelodeon as a part of the network's desire to "revive" beloved properties, which means that Hey Arnold might not be the only '90s cartoon to get the TV movie treatment. The animated series about a "football head's" adventures in the big city resonates with fans just as much today as it did in 1996 when the series began, so it's not surprising that Nickelodeon chose this cartoon as its first TV movie attempt. Hey Arnold certainly left fans with a lot of questions when the series went off the air, which reports say will be cleared up in the new flick.

So what questions are we hoping that the new movie resolves for us? Here are just a few we've thought about for the past decade:

1. Will We Ever Find Out What Really Happened To Arnold's Parents?

In the episode "The Journal," it's revealed that they leave Arnold in order to save a group of indigenous people from a disease that has ravaged their country. (Pretty dark stuff for a '90s cartoon, no?) They were never seen or heard from again, leaving many to speculate whether they really died or are still lost in the jungle somewhere. It won't be a mystery for much longer: according to Variety, that's one question we'll finally get the answer to when the TV movie airs.

2. Will Helga Admit Her Love Of Arnold?

Helga admitted her love to Arnold in 2002's Hey Arnold: The Movie, but quickly blamed her reveal that she was stalker-level obsessed with the titular character on a rush of "adrenaline." Will she ever really admit her feelings, no take backs?

3. Will Gerald And Phoebe Ever Get Together?

Come on: there were totally romantic vibes between these two, even if their affections didn't quite burn as intensely as Helga's did for Arnold.

4. Will Anyone Ever Get The Pataki's Into Family Therapy?

It's really no wonder that Helga has anger issues: her family treats her like crap. Helga's parents favor their older daughter Olga, her mom is a cartoon version of an alcoholic, and her dad has a temper often caused by the world's lack of need for the beepers he sells. Here's hoping that Helga goes off to college and never looks back.

5. Will Stoop Kid Ever Find Peace Off The Stoop?

Or will he continue to use his new found ability to venture off his steps as a way to really scare the neighborhood kids?

6. Will Brainy Ever Get His Day In The Sun?

Here's hoping that Brainy goes through puberty and transforms from heavy-breathing geek to unexpectedly attractive teenager. All of those punches to face earn him at least that.

The running gag of the show could finally be revealed in the TV movie. It's about time!

The new Hey Arnold movie is everything we could possibly want, and here's hoping that all these questions and more are answered when it finally hits TV.