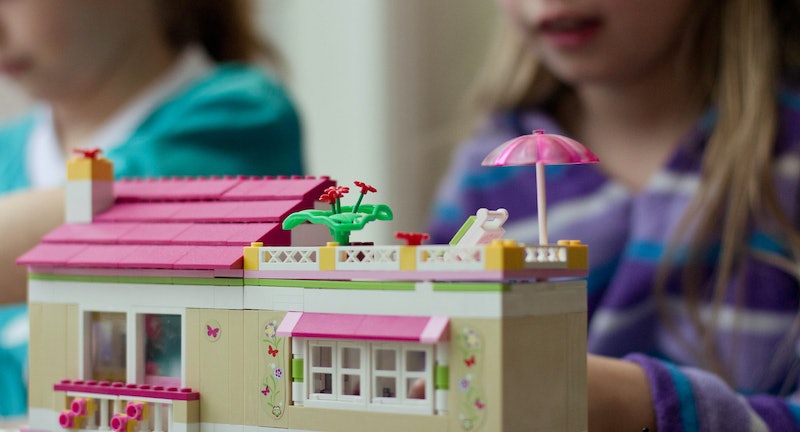 The idea that “William wants a doll” was supposed to be surprising... in 1972. But the division of toys by gender hasn’t gone away. As recently as April, Boots pharmacies in the UK came under fire for stocking science-based toys in the “boys’” section, leaving little girls to choose between tea sets and princess dolls.

Lego Friends have proved a massive success, helping the company triple its sales to girls in a single year, but some worry that Lego’s targeted marketing will perpetuate harmful gender stereotypes. David Pickett, who blogs at Thinking Brickly, criticizes the design of the Lego Friends characters: “They can’t rotate their hands… or move their legs independently (which prevents them from being posed in active positions like running).” The Campaign for a Commercial-Free Childhood singled out Lego Friends’ Butterfly Beauty Shop as 2012’s "Worst Toy of the Year.”

Over the weekend, NPR weighed in, asking, "Why do girls need special Legos?"

But this seems the wrong question when, before Lego Friends came on the scene, 90 percent of all Legos were sold to boys. There’s no point in trying to deny that girls and boys play differently; social scientists have shown again and again that, whether we attribute the differences to culture or biology, it’s not just a stereotype that girls play with dolls and boys play with cars.

Will this always be the case? We can (and should) try to get girls interested in different toys, but there’s evidence that gendered differences in toy choice are more deep-rooted than we might like to think. In one study, psychologists presented children and monkeys with a variety of toys and found that gender was more important than species in determining toy preference: Both boys and male monkeys spent more time with building blocks and construction toys like Legos, while female monkeys and girls tended to prefer playing with dolls and pots.

When the most popular toys for girls are Disney princesses and Barbies (who, by the way, are based on a German cartoon character whose tagline was “Can’t you tell me the name and address of this rich and handsome man?”), I say we should welcome Lego Friends—articulated limbs and all.

More like this
The 'Hocus Pocus' Sequel Finally Has A Release Date & It Makes Total Sense
By Shannon Barbour and Radhika Menon
Meet The Disney Imagineer Bringing 'Guardians Of The Galaxy' To Epcot
By Charlie Mock
Remember These Ancient Pieces Of '90s Tech?
By Lucia Peters and Emma Carey
11 Trends From The ‘90s That Made You Feel So Cool
By Julie Sprankles
Get Even More From Bustle — Sign Up For The Newsletter