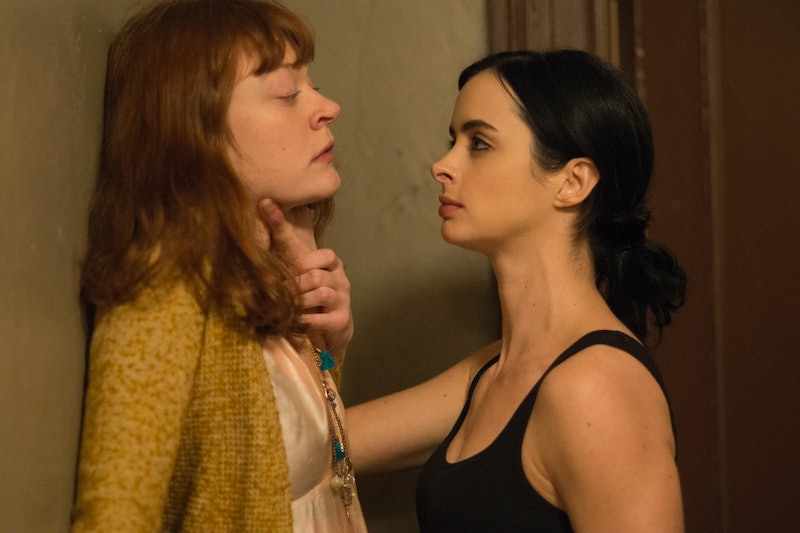 Whether you thought they were creepier than the Lannisters or cuter than a couple of little toes, the twin neighbors on Jessica Jones, Robyn and Ruben, have to be one of the most bizarre comic relief couples in a while. Every thing we learn about the two of them on the Netflix series is more bananas than the last, so I've rounded up all of the tidbits and glimpses into the co-habitation of Robyn and Ruben that make them this show's more bizarre asset. There are spoilers for Episodes 7 - 13 ahead, so don't read on if you don't know what happens to Robyn and Ruben.

Jessica's (fraternal) twin neighbors help fill out the universe that the private investigator resides in, along with Malcolm. They live above her and usually keep her from sleeping, but they eventually enter the story in a major way. I've never known the other people who live in my building as well, and if they're anything like Robyn and Ruben I feel OK with that choice. It's definitely a more accurate representation of NYC apartment living situations than shows like Friends or How I Met Your Mother.

I know that their antics sometimes cause problems for Jones in her quest against Kilgrave, but I couldn't help but be delighted every time either of them opened their mouths and revealed some new bizarre personal fact. It really helped to relieve the tension in what was otherwise an incredibly stressful season. If you would like to celebrate these wacky twins with me, here is a look into the private lives on Robyn and Ruben on Jessica Jones.

1. They Argue Over Cordon Bleu

That's French for chicken, as Robyn informs Jessica. Let we forget, Ruben was not wearing pants during this debate.

2. Ruben Has A Beetle Collection

Which explains, somehow, why he was unavailable when Malcolm stumbled into their apartment.

3. They Have Foil Over Their Windows

4. They Sometimes Spend The Day Baking

Don't worry, it's not crack in the banana bread — it's nutmeg.

Sorry about the zoo.

6. Robyn Can Always Tell About People

"I don't know what kind of spell that harpy puts on men, but you have to stop doing her bidding. You're better than that."

Anyone can be a good judge of character, regardless of their interests.

7. Ruben Is Very Sensitive About His Neck

I'm not crying. You're crying! I bet Jessica wishes she knew that before she severed his (already dead) head to take the police and frame herself.

"Look, broomstick, you're into me, it happens. Romantic backdrop, it's working. But I'm in mourning."

Will Robyn and Malcolm be a couple in Season 2, if that happens? Her sure knows how to show her a good time — if you call visiting the spot where her brother's body was dumped so that they can bury his new iPhone charger with him a good time... which I think Robyn does, actually.

9. Robyn Was Once Almost Recruited By A Cult

What? At least they're real.

10. Ruben Hates Crust With Seeds On It

He won't eat it! Robyn truly thought that Ruben had run away with her to Jessica Jones, and it momentarily broke my heart.

11. Ruben Has A Pet Chinchilla

"Goodbye, Ruben. I hope they have free express shipping in heaven."

Of course he was. An adorable furry animal that bathes in dust is a perfect representation of why I loved Ruben.

12. They Are The Most Forgiving Of The Zodiac

"We're Pisces, you know. It's a water sign. You know what the symbol for Pisces is? It's two fishes... swimming together... in an infinite circle. Ruben and I used to say that's how we were in the womb."

Alas, Robyn is all alone now. Hopefully, she will have time to heal. If she hasn't moved on and started a new life somewhere, maybe she can join Team Jessica Jones in later seasons, or a different Marvel Netflix series altogether in the future!