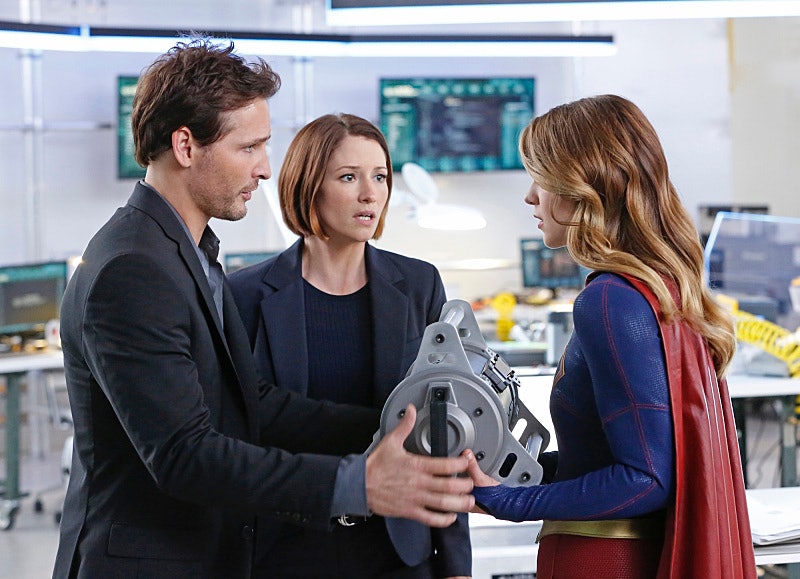 It's often necessary for superheroes to not only have super villains as nemeses, but mortal humans with questionable ulterior motives. Kara Zor-El has met a new match in Maxwell Lord on Supergirl, who may be an unexpected villain. During Monday's episode, titled "How Does She Do It," we were properly introduced to the tech billionaire and his fascination with Supergirl on the CBS series. The episode ended with a fireside chat that proved they were both onto each other, and this could turn into something sinister.

In the episode, Maxwell's weaponry was allegedly stolen and being used by a perceived terrorist who was fired from his company. The DEO tried to get him to cooperate and help stop the attacks, but unfortunately Maxwell Lord hates the government for different reasons, and they were at a bit of an impasse. "I'm also an orphan," he said. "We don't get over things easily." Sick Batman reference, bro. His calm demeanor about the fact that someone was using his technology to bomb the city was very suspicious, but Kara didn't solve the mystery until the very end of the episode. That man was being blackmailed into bombing the train so that Lord would save his sick daughter — just like Benedict Cumberbatch in Star Trek: Into Darkness, but who's counting?

Not only that, but the drones and prior attacks were all tests on Supergirl's abilities and priorities in the first place. He posited that Kara chose to go after the bomb on the train rather than the bomb at the airport not because of the number of people she might be able to save, but because she cared about someone on that train. But who was she most committed to saving, Carter or Winn? Who is her Wheezy? I guess Winn wasn't actually on the train, but I don't think it's any accident that James and Lucy were at the airport, either. Shipping aside, this revealed something to Maxwell Lord about Supergirl's character and the game is a'foot!

Also, was anyone else catching mad chemistry off of Alex Danvers and Maxwell Lord? I'm shocked. I thought for sure that he was being set up as a love interest for Cat Grant. So, everybody wants a piece of Supergirl, from the DEO to CatCo and now Lord Industries. I have a feeling that Maxwell wants to harness Kara's powers rather than kill her, but doesn't care about any collateral damage along the way. The obstacles and foes keep piling up on Supergirl, so it'll be interesting to see where this all goes.