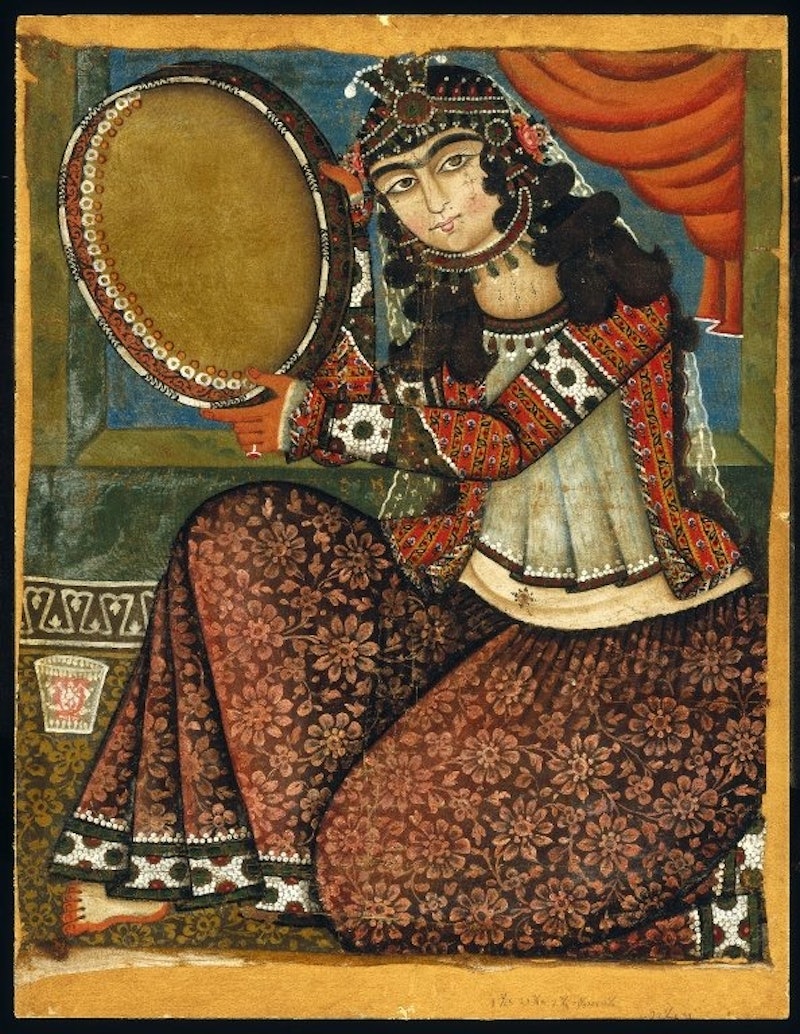 These days, the trend in eyebrows has swung completely from the over-groomed lines of the 2000s to the bushier, more characterful specimens sported by Cara Delevingne. But in ancient history, there's been significantly more variation than just thin versus thick: there's been blue and green, painted versus bald, shaved in mourning versus stuck on with glue, and god knows what else. There has even been eyebrow-based slander; a rumor about ladies of fashion in England and France in the 1700s, that they made false eyebrows out of mouse skin and stuck them to their faces, was so widespread it passed into history, but the British Library believes there's no truth to it at all. Overall, the humble eyebrow's had a hell of a ride through the thousands of years of human history.

One fallacy commonly committed about ancient civilizations is that they had one way of doing things and nothing ever changed. Trends aren't new; the concept of passing fashions has been around for thousands of years. And that applies to eyebrows. In the modern era, we've cycled from the painted, stylized Hollywood looks of the '20s and '30s (mostly to make them show up clearly on screen) to the more natural, arched looks of the '40s, '50s and '60s, gradually building to a crescendo of Brooke Shields overload in the '80s. And that's in less than 100 years. The same thing happened in some ancient civilizations, too.

Here are the ideal eyebrows to put on if you find yourself dropped out of a time machine into fashionable circles in five different ancient civilizations. Though do try to keep up; chances are that the look will have changed by the next dynasty.

Ancient Egypt: All About That Kohl

The concept of kohl eyeliner in ancient Egypt is a pretty well-known one, as are its medicinal qualities (kohl, called "mesdemet" by the Egyptians, helps protect the eye from bacteria and sun damage). But the use of mesdemet was popular for eyebrow elongation too, and it seems to have been used regardless of age or gender.

A tricker piece of information, often repeated wholesale, comes from an unreliable source: the Greek historian Herodotus, who wrote a great deal about the Egyptians. He claimed that when a family's cat died, everybody in the household would shave their eyebrows in mourning. However, Herodotus may have been telling myths. He clearly strived for accuracy, but he also wrote with great conviction that griffins exist and live in Europe. So take that one with a grain of salt.

To write about the "ideal eyebrows of ancient China" would be like trying to say something about "the ideal jeans in America". There's just been too much variation. And some of the trends were absolutely amazing. According to Cho Kyo in The Search For The Beautiful Woman , the ancient Chinese vacillated between loving long, narrow eyebrows and short, thick ones over different dynasties. And they achieved the look of their particular time by painting on the desired shape.

During the Tang period, for instance, women in the court of Emperor Wu were encouraged to paint their eyebrows qingdai, or a lustrous shade of blue-green. It seems to have been an indigo paint that originated in Persia, and was prohibitively expensive. In the Qi and Liang periods, however, a different look prevailed: "immortal moth" makeup, where the eyebrows trailed like the long tails of moths. One poem of the time even contains the line, "The thronging ladies were jealous of my moth-like eyebrows." And every so often, short, thick eyebrows would show up in paintings of court ladies for a decade or so, possibly because they got bored of painting moth-tails on their faces every morning.

Ancient Persia: Threading Before It Was Cool

Eyebrows were a key element of poetic beauty for ancient Persians. The ideal, expressed in a poet's treatise on the perfect woman, is part of a package: "her cheeks have the color of pomegranates, her eyes the form of almonds, her lips are red as corals, her eyebrows arched." And the practice of threading the eyebrows, which uses threads to groom and remove excess hairs, actually appears to have been a mark of adulthood for ancient Iranian women. Once they were betrothed to be married, their eyebrows were fully plucked, marking them as grown-ups.

But there was an interesting shift in the Qajar dynasty in the 1700s, pointed out by Afsaneh Najmabadi, a Fellow at Harvard: female and male ideals of beauty became closer together, meaning more young, beardless men and women with very heavy brows and thin moustaches, like the one pictured. It's even been thought that the Qajar dynasty was the big modern blossoming-point for the monobrow in culture, at least before Frida Kahlo came along.

The idea of the ancient Greek ideal brow is actually kind of a vexed one. Women were supposed, ideally, to be "all-natural," but it's clear from various male writers' pleas that they ignored all attempts to stop them using cosmetics, including blackening their eyebrows. Perictione said that the "harmonious" woman will not "blacken her eyebrows and eyelashes," but it's pretty clear that a lot of women didn't live up to his harmonious expectations. According to Victoria Sherrow's influential Encyclopedia Of Hair, the substance of choice for making your Greek eyebrows stand out was antimony, or perhaps soot if you were in a hurry. And the writers Ovid and Petronius both refer, possibly facetiously, to fake eyebrows that you could "take out of a box" and glue onto your face.

But there's a bit of a problem elsewhere; people have spread the rumor that the Greeks liked monobrows on their women. It's clear from Greek texts, however, that they actually had a more specific taste. Petronius's "ideal woman" had eyebrows that "almost met again close beside her eyes," while the mistress of the writer Anacreon had eyebrows that "neither join nor sever". The ideal, it seems, was actually a kind of blurred join in the middle: not two separate eyebrows, and not a monobrow either.

In the Heian era of ancient Japan, taking off the entirety of the brow and replacing it with painted replacements was, like in China, very popular. The really "in" look was a set high up on the forehead, close to the hairline. But there was one difference: certain aficionados of eyebrow trends marked their foreheads with small, symmetrical thumb-prints rather than actual drawn-out brows. They were called "smudge" brows. Artistic, huh?