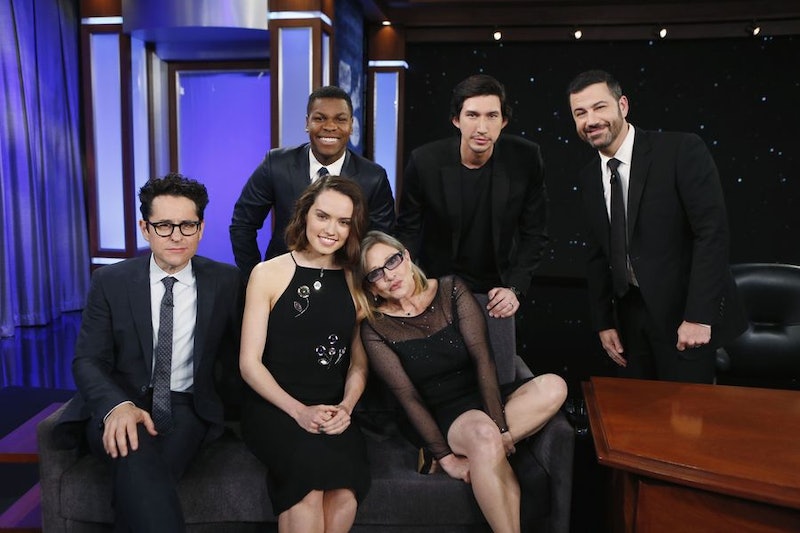 The Star Wars Episode VII: The Force Awakens promotional tour is in fully swing, and it's latest stop was on Jimmy Kimmel Live! for an episode dedicated entirely to Star Wars. Director J.J. Abrams appeared for an interview, along with cast members John Boyega, Daisy Ridley, Adam Driver, and Carrie Fisher. Abrams provided some insight into making the film, and the cast showed off the incredibly charm and chemistry that they have, which will hopefully translate to their characters in the film. During the interview, the cast — especially the sharp-tongued Fisher — dropped some great quotes about being a part of the epic film franchise.

For example, they were asked about when they found out who would be in the new Star Wars film, and some of the answers were downright hilarious. Fisher was straightforward in revealing that, "I was like, 19," but Ridley had an amazing anecdote: "I was at the theater... had to go in for the second half and not tell the guy I was with [that I had just been cast in Star Wars]." Boyega beat her with a shout out to his father, "So I went home and was like 'Dad, I've just been cast in Star Wars' and he was just like 'Oh my God! You are in Star Wars! That is fantastic, I knew it! — What is Star Wars?'" Seriously, Mr. Boyega? Seriously? But maybe it's Driver who should be in the doghouse instead. "J.J. spoiled [the fact that I was in Star Wars] for my wife; he just assumed that I'd told her everything but I didn't tell her," he said, proving that he must have a very understanding wife or he would be in major trouble for keeping that a secret from her.

If the dialogue in the film is half as fun as the actors just playing off each other, than The Force Awakens will easily go down as the most fun you can have in a movie theater in 2015. Check out one of the videos of the whole cast below.