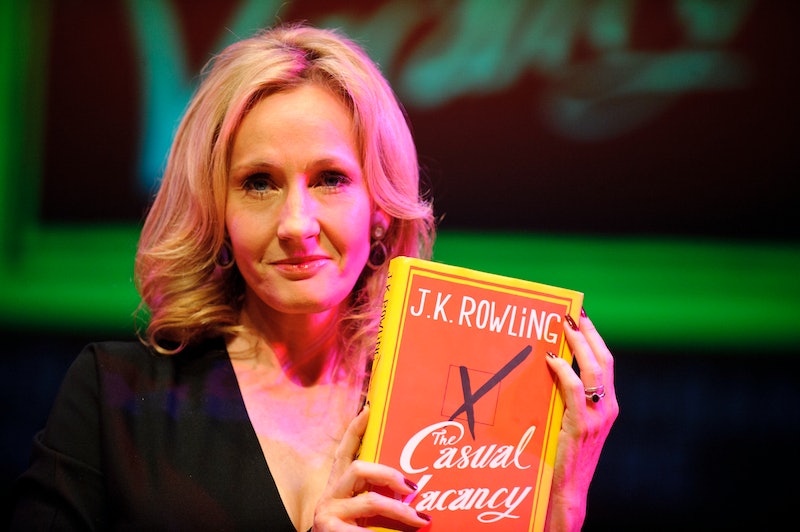 We all have a vague idea of what the life of a writer is like: they get up in the morning, sit at typewriters, write all day long and then... go to bed? Or something like that? OK, so every author has a completely different life, and sometimes we get so swept up in a good book that we can forget there's an actual real-life person behind all those wonderful words.

But all of our favorite authors have lives beyond their most celebrated books, and not always the lives that we would expect. It turns out that many writers had other careers before they even picked up a pen. There are beloved children's book authors who once worked as spies, and famous literary figures who used to hunt ghosts. Or they had strange habits, knew unlikely people, or wrote their most well-known work on a dare. And some of the most renowned writers in modern literature were considered hackneyed back in the day. No matter who your favorite author is — contemporary writers like John Green and J.K. Rowling or classics like Louisa May Alcott or Charles Dickens — chances are that they have some sort of surprise buried somewhere in their biography:

1. Louisa May Alcott Was All About Sex, Drugs, and Rock & Roll

Well, maybe not the rock and roll part. But the author of Little Women was not quite so wholesome as the beloved sisters in her books. Louisa May Alcott got her start in pulp fiction, writing often lascivious stories about spies, cross-dressing, and drugs. She herself used opium throughout her life to cope with various ailments. When she finally got around to writing Little Women and Little Men, she was careful to market a more virtuous image of herself — but Alcott was also the main breadwinner for her impoverished family, so it's hard to blame her for some well-thought-out personal branding.

The man behind Charlie and the Chocolate Factory was actually a bit of a James Bond type. Dahl was a British fighter pilot during World War II, but he was also employed to gather intelligence in the U.S. He was also, apparently, quite the ladies' man during his days as a spy. He was extremely handsome, and ended up involved in numerous affairs with American socialites as "part of the job."

The Hunger Games books are aimed at young adults, but they're not exactly kids' stories. Suzanne Collins' famous series gets fairly serious, and very bloody, so it might surprise you to learn that Collins started out writing for children's TV shows like Little Bear, Wow! Wow! Wubbzy! and Clifford's Puppy Days. I guess after all those cutesy animals, it's only natural to want to write about a post-apocalyptic world where children murder each other on live television.

4. Douglas Adams Was the First Person in the U.K. to Own a Mac

Douglas Adams wrote science fiction, but his Hitchhiker's Guide to the Galaxy was of the softer, more absurdist variety — more about the out-there ideas than the high-tech facts. Adams himself, however, was a huge fan of modern technology, and he was the very first in line to buy the U.K.'s first Macintosh computer. He avidly supported technological advancements throughout his life, as well as devoting a great deal of time and energy to environmental conservation (he may have destroyed Earth in his books, but in real life he was all about keeping the world going).

5. John Steinbeck's Dog Ate the First Draft of Of Mice and Men

Poor John Steinbeck. He might be considered one of America's best novelists nowadays, but during his career he endured some pretty wretched reviews. His own dog might have been his harshest critic, because his canine companion, Toby, devoured the first manuscript of Of Mice and Men. This was before anyone had the option to back up their hard drive, and Steinbeck had to write the manuscript all over again.

6. J. K. Rowling Had to Buy Her Wedding Dress in Disguise

By now, we all know the bullet points about J. K. Rowling's life: she started out at the bottom, writing in coffee shops with her infant daughter, and gave us one the most brilliant book series of all time. But fame is a double-edged sword: J. K. Rowling is just so recognizable that she had to don a literal disguise to buy a wedding dress without being mobbed by the press. She refuses to divulge said disguise, in case she needs to use it again (so just assume that any stranger at any time could secretly be the genius behind Harry Potter).

And he didn't just write for Playboy once or twice. Shel Silverstein, the man who wrote The Giving Tree and all those funny poems we read in grade school, wrote for Playboy for more than 40 years. It doesn't make him any less of a beloved children's poet and illustrator... but it's still a little strange to wrap your head around. But those first few Playboy checks gave Silverstein the money to move out of his parents' house, so any starving artist can relate to his struggle.

8. Maya Angelou Wrote Her Famous Memoir on a Dare

I Know Why the Caged Bird Sings is a beautiful, lyrical, touching memoir of Maya Angelou's troubled upbringing and her journey to recovery from childhood abuse. And it was written on a dare. Angelou did not consider herself a memoirist, but her editor dared her to write an autobiography that was also a piece of literature. Maya Angelou most certainly rose to the challenge.

9. John Green Was a Bad Student

John Green is well-loved for his portrayal of high school students, but apparently he didn't do so well in high school himself. By his own admission he was a "genuinely poor student," and struggled with his school work. So if you were never a straight A high schooler, don't despair: you're in good (and wildly successful) company.

10. Charles Dickens Was a Ghost Hunter

Yes. Famed author Charles Dickens hunted ghosts. Dickens was part of London's Ghost Club in the 1800s, which was pretty much exactly what you would expect: a bunch of Victorian-era men trying to be the Ghostbusters. The club members would investigate paranormal happenings and hauntings, but for all their hard work they were still ridiculed by the London press. Dickens made the club somewhat more respectable, although there doesn't seem to be much evidence that he ever successfully busted a ghost.

11. Rainbow Rowell Wrote a Novel in One Month

Hang in there, NaNoWriMo writers! Writing a whole novel in a month might be a slog, but some people have managed to produce some pretty amazing work under a tight deadline. Rainbow Rowell wrote her first draft of Fangirl during NaNoWriMo in 2012, and she has since spoken up with some encouraging words for anyone brave enough to attempt a one-month novel of their own.