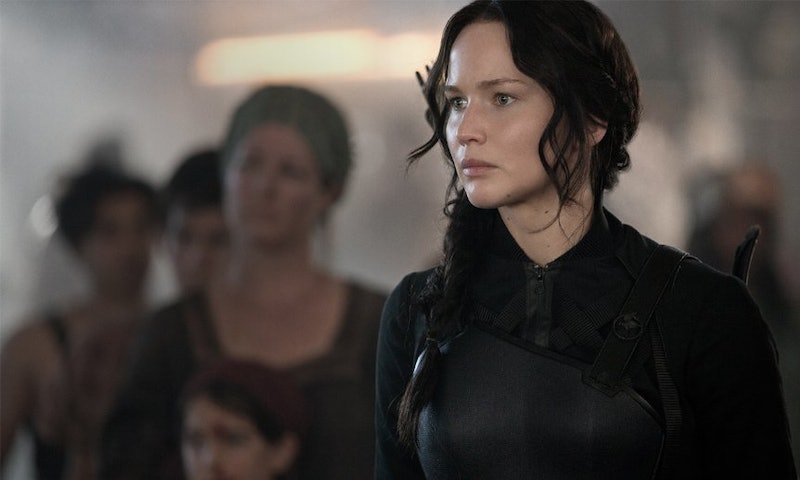 When Jennifer Lawrence's name first started cropping up on list of most promising Hollywood newcomers, it was primarily on the strength of her performance in the 2010 feature Winter's Bone, an indie that earned Lawrence a Best Actress Oscar nomination. Since then she's appeared in blockbusters and critical darlings alike, from the Hunger Games trilogy to Silver Linings Playbook (her second Best Actress nomination and first win). And while she has been recognized as the brilliant, metamorphosing actress that she is for many of her movies, the Hunger Games have not generally been included among her great work. But Jennifer Lawrence is deeply underrated in The Hunger Games , as well as in Catching Fire and both installments of Mockingjay. For example recent Los Angeles Times review blared, "Did Jennifer Lawrence Simply Outgrow The Katniss Role?" in response to the last movie's comparatively modest box office return. The answer? In short, no. Lawrence makes as good a Katniss as they come.

Playing Katniss Everdeen comes with a lot of baggage. I remember sitting on the edge of my bed at 16, chewing my way through the last two chapters of Catching Fire while my family rushed around packing for a spring break vacation. They'd periodically poke their heads in, urging me to get moving, but I was transfixed. This is to say, Suzanne Collins' trilogy rightfully has its devotees, its staunch defenders who point to it as the predecessor in many ways of the teen-dystopia trend that's flooded the market since then. To Lawrence's credit, she's done a marvelous job of carrying the series, making a convincing Katniss for four films. So what makes her such a good Katniss?

1. They Have More In Common Than Lawrence Might Admit

When she signed on to the Hunger Games films, Lawrence became an unwitting role model to young women who already looked to Katniss as an example of a strong — both psychologically and physically — woman. "I never imagined or planned to become a model for anyone, it hit me when I accepted this film," Vogue reports her to have said. They're both outspoken advocates, Lawrence for women in Hollywood and Katniss for, well, all of Panem. And that means they both speak their minds, even when it's not the diplomatic option. But who needs diplomacy when you're trying to save the world?

2. She Underwent Rigorous Training For The Role

Katniss is famous for her skill with a bow and arrow, and after months of training with a Georgian Olympian by the name of Khatuna, she told Rolling Stone that she could hit between four and five bull's-eyes out of 10 shots. "It's annoying how perfect it had to be," she said — just the slightest mistake and the bowstring would whip her arm. But she mastered the skill thanks in part to her tireless work ethic. Her personal trainer added in Teen Vogue, "She was never late. She never missed a workout. She never complained. She did everything that was asked of her and she usually did so with a smile."

3. She Worked Through Changes In The Crew Lineup

Between The Hunger Games and Catching Fire, the series swapped directors: Gary Ross dropped out and Francis Lawrence stepped in to take his place, directing the last three movies. "They're almost polar opposites," Lawrence told Vanity Fair, "and both are completely perfect for these movies."

4. She Will Make You Cry

Spoiler alert: If your eyes didn't well up when Katniss stepped forward to replace her sister Primrose in the Reaping, I can't relate. She drew tears again when her stylist and confidante Cinna (Lenny Kravitz) was executed for assisting in the rebellion, when she cradled District 11 champion Rue into death, and when she wrestled with guilt over her sister's eventual death in Mockingjay. The Hunger Games might not easily fit into the "tearjerker" market, but it certainly has some defining characteristics.

5. She Consistently Receives Better Reviews Than The Films

Just a few examples: the Guardian referred to her as "charismatic" and the rest of the cast as simply "watchable"; the Washington Post wrote "Most of the pleasure of Mockingjay, Part 2 comes from watching Lawrence, not the story around her"; Entertainment Weekly writes that "Lawrence skillfully holds the center." The jury has spoken.

6. Her Expressions Say As Much As Her Words

The Hunger Games is not a particularly dialogue-intensive production. Because much of it takes place in an arena where revealing your cover might lead to sudden death, Lawrence communicates as much in expressions as she does in scripted words. She is subtle, able to transform her countenance with mere seconds' notice. In a movie whose dialogue can be heavy-handed, this is an enormous asset.

Lawrence's role as Katniss will never hold the same prestige as her newest effort Joy or that career-making turn in Winter's Bone. Yet over the course of the four films, Lawrence has proven that she can be the lynch pin of a massive blockbuster just the same as she can captivate audiences in awards-bait and indie productions.