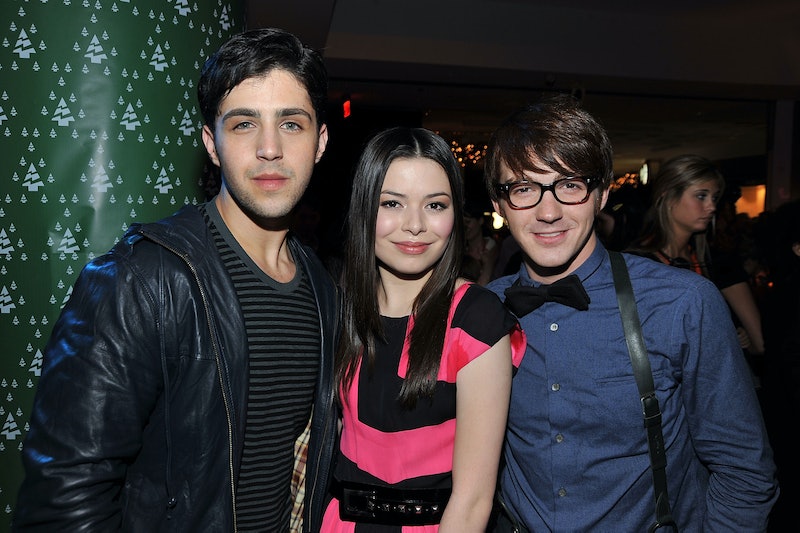 Children of the '90s and early '00s are finally getting the moment they've all been waiting for — a Drake and Josh reunion is happening. Yes, really — and even though they won’t be reprising their classic show, it’ll be great to see the faux stepbrothers back together again on-screen. Entertainment Tonight reported on Tuesday that Drake Bell will guest star on Grandfathered, his former co-star and longtime friend’s new show: "In an upcoming episode of the hit Fox comedy, Bell will play Kirk, a flashy tech investor whom Gerald (Josh Peck) and Vanessa (Christina Milian) are desperate to meet up with to pitch their new app. But once Gerald and Vanessa come face-to-face with the loaded entrepreneur, they're not sure he's the best man to do business with."

And even though it’s been eight years since Drake & Josh went off the air, the two stars are still really good pals. Peck, who is a master of social media (you really need to check out his Vine and Snapchat), loves paying homage to the show, including this bit wher he and John Stamos traded catchprases ("headaches" and "have mercy" being two).

And even though Bell appearing on Grandfathered isn’t quite the kind of reunion I was hoping for (a Drake and Josh movie, anyone?), it will still be amazing to see their chemistry on-screen again. Here's how the duo have kept their love and friendship strong all these years.

Back when Bell was a contestant on Splash, Peck was there for him in real time with these supportive tweets.

They're Not Afraid To Show Their Love

That hashtag is so adorable.

They Reunited On Vine

I ain't callin' you a truther!

And At The Kids Choice Awards

An incredible moment: Bell, Peck, Miranda Cosgrove and practically the rest of the entire gang, standing beside the casts of iCarly (starring Cosgrove) and Victorious. It was nice to see Josh finally getting along with his manager from the movie theater, played by Yvette Nicole Brown.

So good to see these faces together again!

They're Both Super Excited For the Grandfathered Episode

They've got nothing but excitement and enthusiasm for working together!

The episode of Grandfathered guest starring Drake Bell will air on Tuesday. Hug me, brotha!