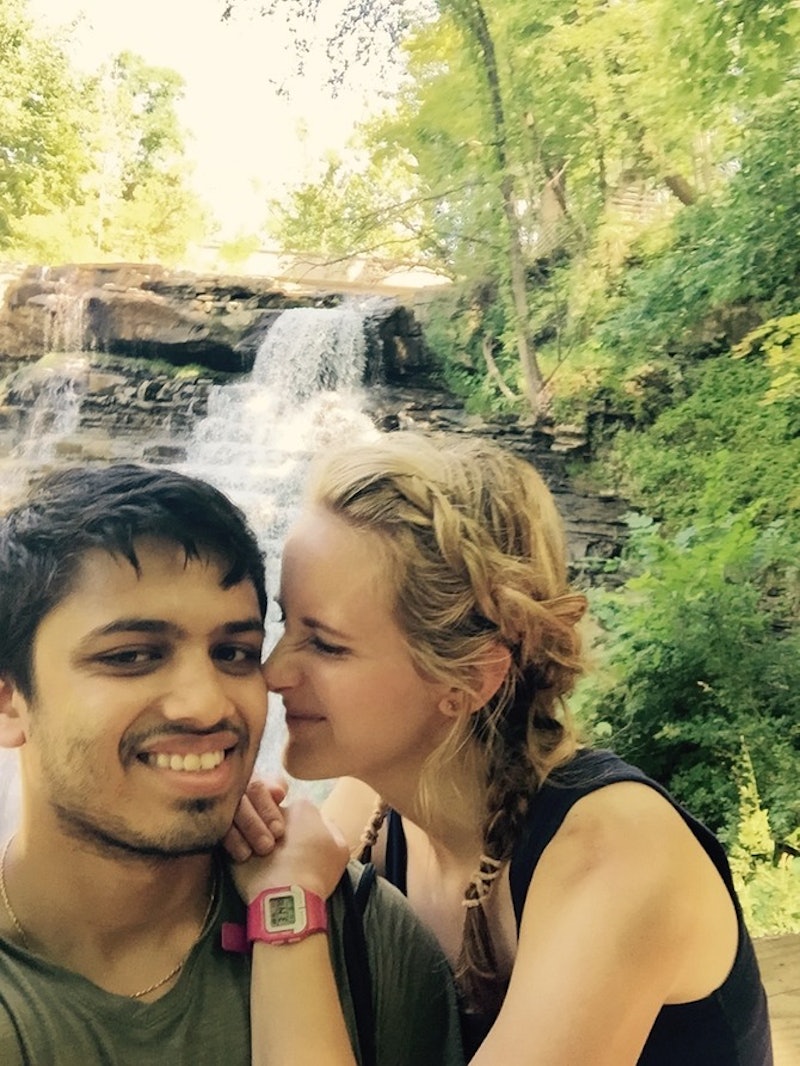 It’s the look on his face that kills me a little each time I see it. The phrase “blank stare” doesn’t do it justice. When my husband, Kumar, is playing video games, his expression goes completely flat. His eyelids sink to half-mast. His posture is slumped. His lips even change in nature; the bottom one just hangs there, like his chin is no longer willing to support the weight of it. Only his thumbs demonstrate that he’s not a vegetable.

Yet, when Kumar dances, he has so much vivacity that anyone watching him will immediately start smiling. He does this thing when I’m bored where he starts to make a pained facial expression, and then very slowly twists his face up more and more until it turns into this grotesque, horrified mask of his former self. He’s incredibly unique and wonderful. He’s also a doctor. He also did the dishes this morning even though it was my turn.

It’s just that when he’s slouching in front of his desktop playing League of Legends or some other game I don’t understand, it weirds me out a little. It’s not even this stereotypical “he’s not paying attention to me,” frowny-face wife stuff; it’s that I don’t recognize the person I love when he’s in front of a screen.

He also doesn’t blink, which is concerning.

In the past, I’ve lost my temper over the fact that I’ll be diligently writing in the “working corner” I’ve concocted in our tiny New York City apartment, only to be distracted by his furious key-tapping or the electronic noises of dragon-slaying or sword-fighting or whatever coming from his computer.

Even after he mutes the video game, the tiny sounds of the clicking of the mouse and keys still bother me; my shoulders become tense, my cheeks grow hot, my foot starts tapping against the floor. Meanwhile, outside, there’s the sound of honking cars, ambulance sirens, and children playing on the school jungle gym behind our building.

It’s when my hints or reminders or even desperate dances that involve jazz hands go unnoticed for hours that my annoyance starts to boil over.

It’s lonely being in the same room with someone who doesn’t seem to realize that you’re there. Before we got married, I always imagined the two of us spending Sunday afternoons listening to records or interrupting each other to read a favorite passage from a book or article. We’d be quiet — engaged in our individual work or hobbies — but still present, still able to laugh at a joke, or pause what we’re doing in order to listen to the other person.

But I married a doctor who is now two years into his medical residency and trying to balance his time between working extremely long hours in a high-pressure position and studying for licensing exams. He’s too worn out to read for fun or even enjoy music, and if he simply watches TV he’ll fall asleep before the opening credit sequences even finish. So he plays video games in order to decompress from work instead.

Any gamer — of any gender — that I’ve been friends with or dated, has made the argument that video games not only relax them, but improve their motor skills and decision-making times. Previously, this argument reminded me of the way an ex-boyfriend so righteously defended his cigarette smoking with the mantra: “It just helps me relieve stress, OK?”

Gaming addiction is increasingly becoming a problem, yes, but, conceivably, a controlled, moderate amount of gaming is just fine. Not only have some studies shown that video games can have a positive effect on things like motor skills, but a 2014 study from Oxford University showed that a little gaming (less than an hour a day) led to an increase in social skills in children and teenagers.

I get it. It's just when the gaming goes on for hours and hours that I wonder if it isn’t my duty as a partner to point it out, the way he’ll point to a pile of my dirty clothes on the floor and say, “Remember the rule?” It’s when my hints or reminders or even desperate dances that involve jazz hands go unnoticed for hours that my annoyance starts to boil over.

We’ve all seen that scenario in movies or TV shows where the girlfriend is yelling at the boyfriend about playing too many video games and being a lazy slob. (Notice that it’s always that typical hetero dynamic as well.) Then, before storming out of the house, she sets this ridiculous ultimatum for him, like, “If you ever play video games again, I’ll leave you and you’ll never hear from me!” These scenarios don’t help those us who live in the real world of maturity and equality and compromises.

On one such day in the real world, right after I watched nearly a whole season of Parks and Recreation, I (very harshly) suggested to Kumar that he should get himself off the couch after he’d played a few hours of video games.

He didn’t call me out for being a hypocrite, even though I immediately braced myself for it. He just looked up with me with an apologetic smile and, instead of delivering a comeback, said, “This is my last game, I promise.” And it was. It’s times like these that I realize that he wants to be more present, but is simply struggling through a difficult, exhausting time in his life.

Last night, I retreated from our bedroom because I wanted to sit in my favorite chair and read a new memoir I’d picked up. I read for five hours without once getting up, not even to pee. I know that anyone would have noticed that same “blank stare” look on my face. And, in the midst of a particularly good chapter, I remember reaching a hand up and wiping off a bit of drool that was pooling on my bottom lip. It didn’t occur to me for a second to take a breather, grab a Kleenex, and check in on Kumar.

When I crawled back into bed just as the sun was coming up, Kumar didn’t chastise me or tell me that he wished I’d be more present. There was no judgment or anger over the fact that he often rolls over in bed to discover I’ve abandoned him for a book or Word document in the other room.

Instead, all he did was hug me and say, “Welcome back.”

More like this
Are Sagittarius & Sagittarius A Good Match? Astrologers Weigh In
By Kristine Fellizar
15 Ways To Deal With A Toxic Family During The Holidays
By Gabrielle Moss and Carolyn Steber
Kumail Nanjiani & Emily V. Gordon’s Relationship Timeline Is Literally A Movie
By Jake Viswanath
Olivia Wilde & Harry Styles Are Reportedly "Taking A Break" After Almost 2 Years
By Jake Viswanath and Radhika Menon
Get Even More From Bustle — Sign Up For The Newsletter