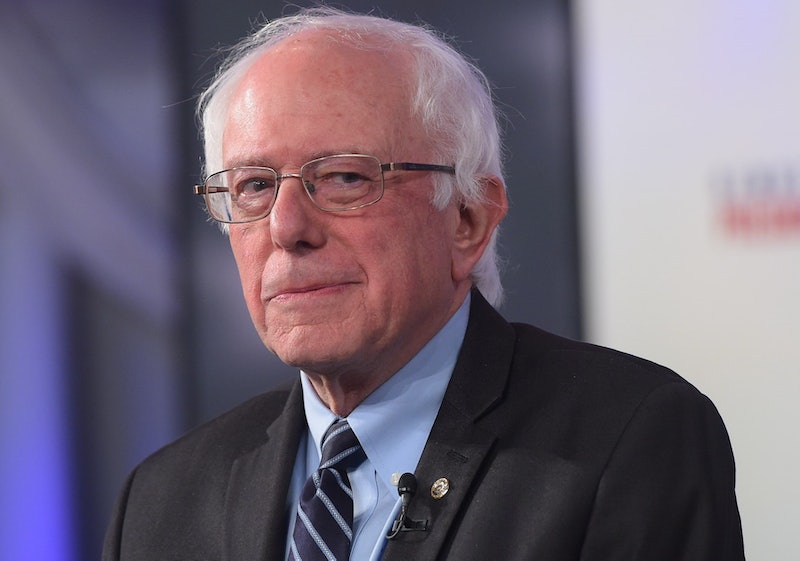 Bernie Sanders recently identified himself as a feminist, making it clear that he intends to fight for women's rights if elected president. The Vermont senator told The Washington Post in September that while he knows many women want to see America led by a female president, voters need to choose the candidate most equipped to make a liberal feminist agenda a reality (and he believes that's him). Sanders does have a very pro-women track record, and he's consistently stood up for women throughout his bid for president. So, there are some things every feminist should know about Sanders' campaign before writing him off as a typical male candidate.

Sanders' campaign website marks women's rights as a key aspect of his political agenda. It reads: "Despite major advances in civil and political rights, our country still has a long way to go in addressing the issue of gender inequality. Many of the achievements that have been made for women’s rights in the 20th century have been under attack by the Republican party — denying women control over their own bodies, preventing access to vital medical and social services, and blocking equal pay for equal work. When it comes to the rights of women, we cannot go backwards. We have got to go forward."

Here are six things every feminist needs to know about Sanders' campaign in order to understand his stances on specific women's rights.

Not only does Sanders want women to be paid the same wages as men, he also realizes that women of color suffer from the biggest wage gaps. He promised to sign the Paycheck Fairness Act into law as president (if it's ever passed by Congress that is) on his website.

He Fights Attacks On Reproductive Rights

When Republicans attempted to defund Planned Parenthood recently, Sanders defended the organization and women's reproductive rights. He wrote in a Facebook post: "When you tell a woman that she cannot control her own body, that’s extremism. Let's say it loud and clear: women control their bodies, not the government." His campaign website even pledges to increase funding for Planned Parenthood and Title X family planning program if he's elected.

He Advocates For Maternity Leave

In June, Sanders outlined his family values agenda, which calls for 12 weeks of paid maternity leave for all American workers. "Simply stated it is an outrage that millions of women in this country give birth and then are forced back to work because they don’t have the income to stay home with their newborn babies," Sanders said in his announcement.

He Wants A $15 Minimum Wage

Minimum wage may not seem like a feminist issue, but two thirds of minimum wage workers in the U.S. are women, making a low minimum wage a huge contributor to the gender wage gap. Sanders wants to establish a $15 minimum wage and a $15 tipped minimum wage, which are currently at $7.25 and $2.13 an hour respectively.

He's Working On A Childcare Plan

He Thinks Healthcare Is A Right

Sanders wants to create a Medicare for All system that makes healthcare a guaranteed right for everyone. His website says: "If the United States joined every major country on earth and enacted a universal healthcare program, women would benefit the most." Sanders is correct, since women have higher healthcare expenses than men. In her Burwell vs Hobby Lobby Supreme Court case, Justice Ruth Bader Ginsburg wrote in her dissent that women of childbearing age spend 68 percent more in out-of-pocket health care costs than men.