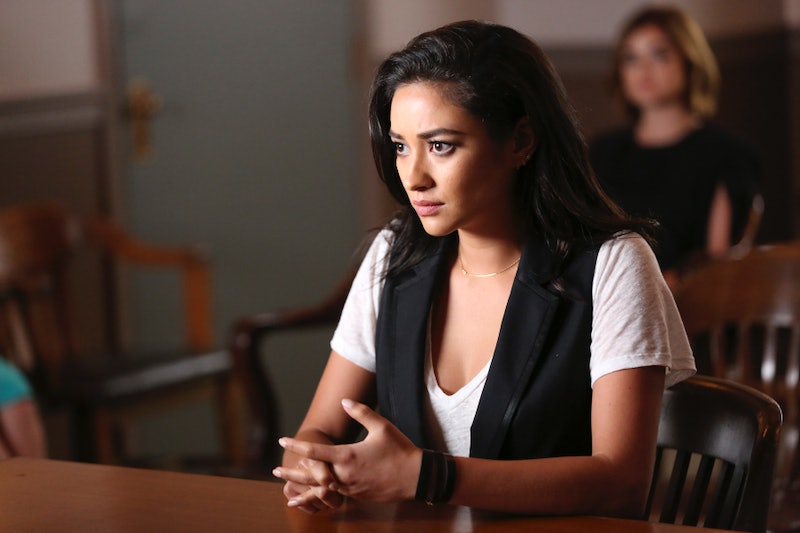 Huge changes are coming to Pretty Little Liars, but perhaps the biggest changes are within the Liars themselves. Aria, Hanna, Spencer and Emily are no longer high school students on the run from A: they are young women just starting out in their careers and have the promise of a whole new future ahead of them. Unfortunately, not all of the Liars are quite as optimistic about their future at others. Emily's father Wayne died in battle sometime during the time jump, and it sent Emily's life into a tailspin: she even dropped out of college when her grief was too much to handle. Emily seems to be having the hardest time five years after the girls unmasked A, and, according to Tuesday's Five Years Forward special, it's more than just her grief that she's hiding. Emily has a big secret she's keeping, and it could be that she's pregnant or has a secret baby out there in the world.

If this seems entirely out of left field (no pun intended) then that may be because you haven't read the Pretty Little Liars book series by Sara Shepard. If you haven't, spoilers for the series will follow, so read on at your own discretion.

In the book series, Emily has relationships with both women and men. While her first big relationship is with Maya, her next very serious relationship is actually with a guy. In the book Wicked, Emily finds out that she is pregnant with her boyfriend Isaac's baby, something that she's definitely not prepared for and sends her into a bit of a depression. She keeps the pregnancy a secret from everyone by hiding out in her sister's dorm room in Philadelphia, and doesn't tell Aria, Spencer or Hanna why she's been MIA. Emily then gives the baby up for adoption so that the baby can have a better life with a family that is ready to care for her. Could a similar situation happen in the TV show?

Though the TV show is vastly different from the books, the show does borrow from Shepard's series, and did so significantly with the Big A reveal. In the books, Ali has a twin named Courtney, and it's actually Ali who murders her twin in an act of revenge. The show doesn't have Ali with an actual "twin," but it does she her with an older sister who resembles Ali enough to pull a switch whenever necessary. In that way, the show pays an homage to the books without ever following the plot line directly.

If Emily's secret is going to shock fans more than Caleb and Hanna breaking up or even Emily's father passing away in battle, it has to be something that no one would suspect. Emily being pregnant, or having formerly been pregnant but given up the baby for adoption, would certainly would fit the bill, even if the circumstances aren't exactly the same as in the books. Maybe instead of accidentally getting pregnant, Emily became a surrogate in order to pay her bills, only to get tangled in a situation she felt she couldn't tell her friends about. Either way, Emily's biggest secret from the books might mirror her new secret from the show.

We'll find out the truth about Emily when the show returns on Jan. 12, but until then, let's keep mining every piece of evidence we can for more clues.