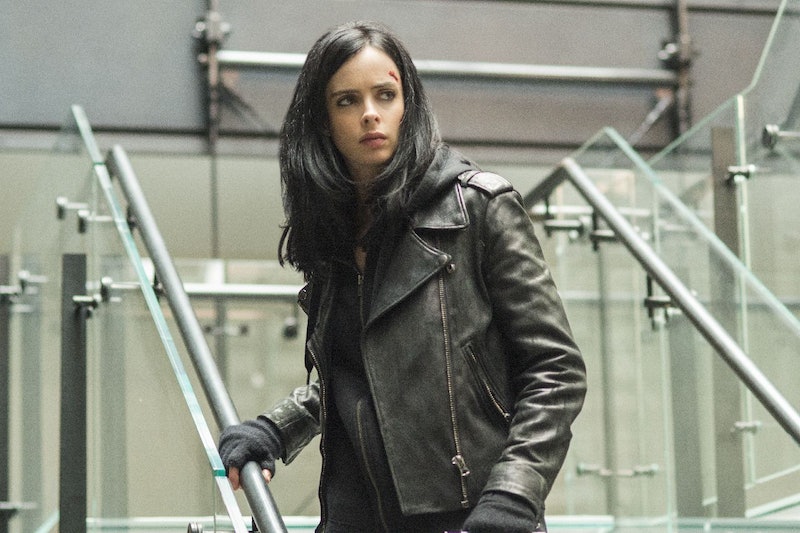 By this point I think it's safe to assume that you've at least started watching the truly spectacular Jessica Jones on Netflix, or maybe, like myself, you've binged it so heavily and hungrily that your show watching partner is upset that you've gone ahead and watched the finale without them (apologies to my long suffering boyfriend, but it had to be done). Whatever stage you're up to with Jessica, it's clear pretty much from the first episode that this show isn't playing by the rules. In fact, Jessica Jones superbly subverts superhero tropes and makes a distinct point of eschewing audience expectations of what a female superhero should look and act like.

So it absolutely thrills me to hear Krysten Ritter talking about the show in a way that supports it's irreverent nature. In an interview with Time Magazine, Ritter talks about how she was 100 percent involved in bringing crucial input towards Jessica's wardrobe, explaining that she relies "really heavily" on using wardrobe to inform the physicality and development of her character. But vitally, Ritter also understands that heels and a skin tight costume don't make for great bad guy fighting apparel.

Ritter says, "I love the way she dresses, how simple it is. I didn’t want to show my figure or wear anything too eye-catching. I thought it was important to be practical. It’s hard to fight in high heels or even jeans that are too tight. You can’t kick in skinny, skinny jeans. And I don’t know about you, but I can’t walk in high heels. I literally wear them only when I have a red carpet to go to and take them off immediately afterwards. I can be in them for maybe 45 minutes and that’s painful. I just can’t do it. It kills my feet and hurts my back. So I’m all about practical shoes". Amen to that, sister. In fact, 10 minutes in heels and I'm done.

For women who've spent years rolling their eyes at yet another impractical and quite frankly, painful looking superhero costume on a female character, this is a game changing statement to make. You need only look as far as the costume for Gal Gadot's Wonder Woman in Batman vs Superman, complete with heels and the sort of stiff looking body that a woman could probably just about breathe in, nevermind fight in. Or Margot Robbie's Harley Quinn in the upcoming Suicide Squad movie, which gains some points for combining a flexible t-shirt and hot-pants combo (although teeny tiny shorts can also prove problematic if you're hoping on doing some high kicks) but instantly lose them again for the pair of stiletto baseball boots that she's wearing.

These costumes are impractical, uncomfortable and look seriously outdated when you pitch them against a hero like Jessica who, in her daily look of a biker jacket, loose fit jeans, t-shirt, hoodie and flat boot combo is ready to take on whatever threat the World has ready for her at any one time.

Jessica Jones also poked it's own fun at the whole 'impractical female superhero costume' culture via it's clever referencing of the original comic book costume for the character. When best friend Trish Walker is trying to persuade Jessica to use her powers for good and become a hero, she even adorably makes a costume for her (Trishica forever!). Jessica is less than impressed, and why should she be? For one thing it looks barely breathable, for a second, it's white (seriously, that thing will be so dirty within one night of crime fighting) and for a third, it's a strapless one piece.

I don't know about you but I can't even survive a night out in a few dive bars wearing a strapless anything without wanting to head straight home to change. Most breasts can not survive that level of freedom, and if you're trying to fight people in an outfit like that then you're asking for an uncomfortable guest appearance by them.

So, Ritters words are spot on and actually, they've been a long time coming. But are they game changing? Let's hope so.