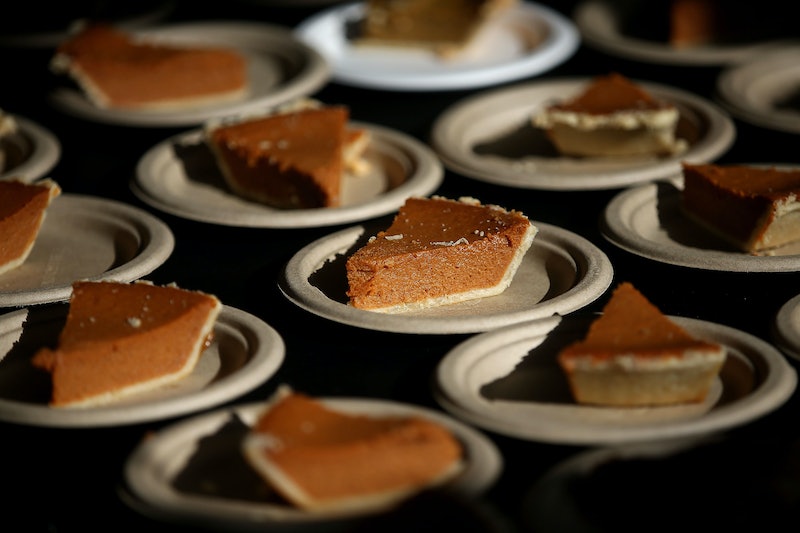 What does a holiday have to do to get a song around here? Thanksgiving has parades, football, and all the food, but there isn't a universally acknowledged anthem for the holiday (unless you count Bob's Burgers' perfect "Thanksgiving Song"). I have Thanksgiving's back though. Since Christmas is always honing in on Thanksgiving's territory with its early decorations and Black Friday sales, then I think it is only fair for Christmas to share its songs with Thanksgiving. I know "Jingle Bells" doesn't exactly leave you with visions of turkeys dancing through your head, but when you really think about it, lots of Christmas songs could also be about Thanksgiving.

The two holidays aren't all that different at their core. They are both about being grateful, spending time with friends and family, and stuffing your face with delicious desserts. It's not such a huge stretch to see similarities between "All I Want For Christmas Is You" and your feelings on stuffing when you get right down to it.

Thanksgiving will not be denied songs about its festive eating and late afternoon naps anymore! These 11 Christmas songs could definitely be about Thanksgiving too. The next time you listen to them (which will be very soon, I'm sure) send a little love Thanksgiving's way.

1. "Have Yourself A Merry Little Christmas"

Replace Christmas with Thanksgiving and this song becomes an anthem to being with your loved ones, enjoying good company, and celebrating everything you are grateful for. Forget about hanging the star and add a line about turkey and you've got yourself a song even the pilgrims would have approved of.

Sure, Mariah Carey was singing about a person, but you know during that long wait for dinner to hit the table on Thanksgiving this song perfectly sums up your feelings. You don't want a lot for Thanksgiving, but you do need pumpkin pie.

3. "It's The Most Wonderful Time Of The Year"

I love Christmas, but it can be majorly stressful. The shopping alone is a nightmare (and not the fun kind with Jack Skellington). The actual most wonderful time of the year is Thanksgiving. Think about it: there's roasted marshmallows on your sweet potatoes, lots of gatherings, and everyone tells stories about Thanksgivings past. This song and Thanksgiving are soulmates.

Christmas does not have the corner market on somberness. There's also a hint of sadness to Thanksgiving. Not everyone can go home for the holiday, but it comes just the same. For all those who can't be where they want to be on Thanksgiving, "I'll Be Home For Christmas" could be a comfort.

This song is all about food. Come on, you didn't think the recipient of all those birds wasn't going to eat some of them? And I'm pretty sure the "five gold rings" are delectable buttered rolls. Then at the end all the guests come over. Bam — Thanksgiving song.

If Thanksgiving could express its feelings in song, I'm sure it would follow the Grinch's lead. I know I couldn't blame Thanksgiving for wanting to steal all the Christmas decorations until December. This is the song for anyone who loves Thanksgiving and doesn't mind being called a Grinch for wanting to keep the holidays separate.

Thanksgiving is Christmas for adults. There's no presents, but there's turkey, football, and an awesome dog show. Plus, Santa is technically on his way, so the song is accurate for both holidays.

There is an actual rundown of classic Thanksgiving dishes in this song. Macaroni and cheese, collard greens, and stuffing all get name checked.

9. "We Wish You A Merry Christmas"

Think about how Thanksgiving works for a minute. You tell everyone "Happy Thanksgiving" and then you refuse to leave their house until they feed you. I think these carolers were just confused about what holiday they were singing about. It's not their fault, they probably just wandered into a department store and saw Christmas lights and fake snow in the middle of November.

10. "Over The River And Through The Woods"

There is so much traveling involved in Thanksgiving. It feels like you are tromping through the woods and over a river just to get to your destination, which, just like in the song, has pie.

At the end of the day, Thanksgiving is as much about being with your family as it is about the food. Everyone's happy because their bellies are full and the whole day has a bit of magic about it. You wouldn't wish someone a holly jolly Thanksgiving, but maybe you should.

Now that Christmas truly is on its way, don't forget about Thanksgiving. Your love for balloons and turkey legs deserves to be honored just as much as Santa, and now you have a whole list of songs that work for both.