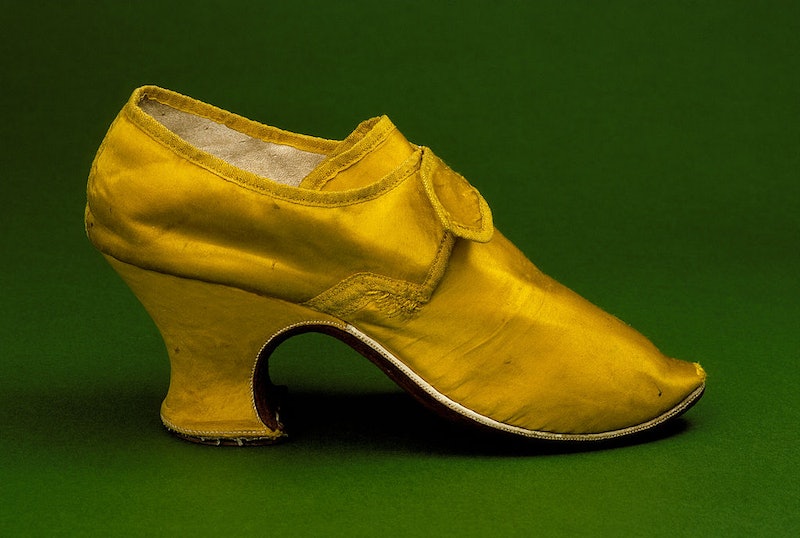 You could be forgiven for thinking that high heeled shoes were constructed purely to torture women into feeling as if their toes had fallen off by the end of a night out, right? Wrong. They've got a long, storied, and pretty weird history going back thousands of years, incorporating religious ceremonies, prostitution, decadent kings, gender-bending fashionistas, and child brides. And what's more, high heels weren't originally intended for women at all. It turns out that, when it comes to heels, we're actually the late adopters: the real fashionistas on the heel front were men.

If you've ever gone to a shoe exhibition at a museum, you'll likely have viewed parts of it with your toes cramping in anxiety. Why would people put themselves through such torture on the body parts they walk on every day? The answer, usually, has to do with a mix of power, status, beauty, and sex. We didn't get into heels as a species because somebody wanted to feel more comfortable. We wore them (and continue to wear them) to look taller, more elegant, more sexual, tower over our rivals, be the most prominent person onstage, and generally dominate the room. When you stride into a bar in your 5-inch heels you're part of a very long tradition, with some admittedly very peculiar elements.

The rise of the platform heel from the '70s in today's fashion may seem to signal that we're tired of bending our feet out of shape, but all it shows is that we're temporarily tired of leaning all our weight on our toes. Many of us still want that height, that boost, that sashay. And why wouldn't we? After all, everybody from the Persian Emperor to Louis XIV of France had something to say on the topic of heels. While we can't all be like Imelda Marcos, who famously collected up to 3,000 pairs of heels, we can still look at our treasured few and think of how far they've come. Before taking them off and putting on our slippers, that is.

The idea of a high heel or platform shoe is actually a seriously ancient one. One of the first traced high-level pieces of footwear in history belonged to actors in ancient Greece, and were known as kothorni. They were flat shoes with wooden or cork bases up to four inches thick. However, these weren't necessarily worn offstage; they were actually meant as a kind of shorthand about the social class of various characters in Greek drama and comedy. The higher the heel, the more "elevated" the character.

There's also evidence that ancient Egyptians used heels, though not for everyday use. Like the Greeks, they used their heels (which, again, were significantly high, flat platforms) for a definite purpose: murals dating to around 3500 BC show them wearing the shoes for religious ceremonies. We don't know why, though. The higher the heel, the closer to the Egyptian gods?

Medieval Persia: The Trend Catches On

One of the most convincing theories about how the high heel took over the world comes from shoe expert and academic Elizabeth Semmelhack, a curator at the Bata Shoe Museum in Canada. Her thinking? Persian riding shoes were the real source of the first trend.

Persian art shows that many noblemen of the medieval Persian empire wore heels as riding shoes, often in decadent materials and bright colors, to enable them to get a better grip on their stirrups. According to Semmelhack, the European royals really perked up and took notice when a Persian monarch, Shah Abbas, came to tour European courts and make noble friends in the 1500s. The diplomatic gesture turned into a fashionable one, too: people saw the beautiful heeled shoes worn by the Shah and his entourage, and decided to make them their own. And rightly so. Those things were gorgeous.

The idea of the heel actually being a "female" notion took a very long time to develop. One of the places where it took hold, however, was in Venice in the 1400s. But these weren't heels that you'd like to wear clubbing these days. Chopines, as they're called, were staggeringly high, slightly-tilted shoes with as many as 24 inches of narrowed platform underneath. They were originally designed to keep the mud off the more delicate "real" shoes of ladies walking in the street, often made of easily-stained material like animal skin or satin, but they developed into decorative symbols all of their own, and a Europe-wide trend.

Chopines are actually not just a European idea. The Japanese have had them for centuries, under different names, but for the same essential idea: keeping an expensive kimono from touching the dirty ground, and looking as distinctive as possible. Apprentice geisha, known as maiko, will wear footwear called okobo, which are made of solid wooden blocks and tower above the ground. And the concept of the "elevated" foot has been present in Japanese fashion for ages; the geta, a shoe made of a plank of wood with two others underneath to hold the wearer off the ground, can be up to 18cm high.

The chopine was eventually outlawed in France, for various reasons. One was that they were most often worn by prostitutes, who used them to get attention. Another was that they were blamed for a whole heap of problems, from traffic accidents and frequent falls (likely) to miscarriages (a bit less likely). They were also ridiculed widely by everybody from Shakespeare to religious commentators, who thought they were outrageous.

The idea of the low sole and high heel as an option for women seems to have made its debut on a fairly spectacular public occasion: a royal wedding. When Catherine de Medici married the Duke of Orleans in 1533, the 14-year-old bride apparently wore towering heels to look slightly more like an adult, instead of chopines or flats. The then gender-bending move made a splash, and the door opened to women wearing more typical "riding heels".

It also seems to have been part of a general trend of more androgynous fashion. Being "masculine" took hold as a real fashion trend in the 1630s, with European women smoking pipes and generally behaving like young dudes. And the male heel was part of that movement.

The Baroque Period: All About Aristocratic Male Heels

The Persian shoes presented by the Shah were definitely only for men. And it was European royal men who really took them and ran with them. (So to speak.)

The real fashion maven, and patron saint of the heel, was Louis XIV of France, otherwise known as The Sun King. He loved all things ornate; he was the one who made the seriously decadent Palace of Versailles his center of power. And the heel was just the thing he wanted to look even more elaborate. Standing at just 5'4", he adopted it enthusiastically, often with up to four inches of heel on his court shoes. He even developed a trademark of red-painted heels and ordered all male members of his court dye their heels the same color. Fun fact: that's the tradition of luxury that Christian Louboutin's crimson soles are referencing.

The high heel went through a serious fall in fortunes after the French Revolution, when people wanted nothing to do with looking like aristocrats (who were pretty unpopular). And the New World wasn't fond of them either; Massachusetts Puritans banned high heels outright, thinking they were seductive and possible instruments of witchcraft. But they would bounce back.

The Victorians were actually the ones who really rediscovered the heel. New sewing technology allowed for gentle heels with a few inches, but that was considered quite enough. The focus was on the instep; a curved instep was supposed to show a woman's femininity and refinement, and tiny heeled feet were the height of sophistication. It was the beginning of erotic photography, too, and heels played a strong role in its first years. The BBC reports that some of the first nude photographs of women featured high heels, and it was a feature of most of the "French postcards," as sexy photos of ladies were called at the time. The male hold on the heel had thoroughly broken.

Pornography (and its more innocent cousin, pin-up photography) is commonly credited with making the high heel a popular, fetishised object, particularly during World War II, when men had photographs of girls in heels pinned up all over the battle-grounds of Europe. Helen Fisher, a famous sex anthropologist, has pointed out that this was the bit of history where we really discovered the sexual pose heels created. "High heels thrust out the buttocks and arch the back into a natural mammalian courting — actually, copulatory — pose called ‘lordosis,'" she told Today in 2009. The seriously high heel had arrived.

In 1954, the first stiletto heel was invented by Roger Vivier for Christian Dior's fashion collections. Named after the Italian word for a thin dagger, the shoes (one of which is pictured) were immediately taken as a serious sex symbol by Hollywood. There's a long-standing rumor, probably untrue, that Marilyn Monroe had one heel on her shoes made slightly shorter than the other, to produce her exaggerated sexual gait. She was certainly a footwear pioneer: she was given custom-made shoes by the shoe designer Ferragamo, now one of the most famous in the world.

The heel made a splash in 2015 when the Cannes Film Festival reportedly banned women from wearing anything other than towering heels on the red carpet. It rightly caused a lot of controversy: does the heel have a stranglehold over female glamour? The real mania over heels, partially fueled by the Manolo-obsessed Carrie Bradshaw character on Sex And The City in the 2000s, may have begun to dampen slightly. Health fears about the dangers of heels, which draw reports of damage to ankles, bones, muscles, and general balance, have given women reason to think twice before reaching for the 6-inch stilettos.

But boundaries continue to be pushed. David Lynch designed some fetish heels with Christian Louboutin that operate essentially as ballet shoes, forcing the wearer into permanent en pointe. The late Alexander McQueen made extraordinary heels, including his iconic Armadillo heels, which essentially look like pods from outer space. And Thom Browne recently sent geta-like shoes down his 2016 catwalk. It's all about making heels new and different, often by referencing their long and complex past. But will men ever take the plunge into heels again? Now there's a new frontier I'd like to see.