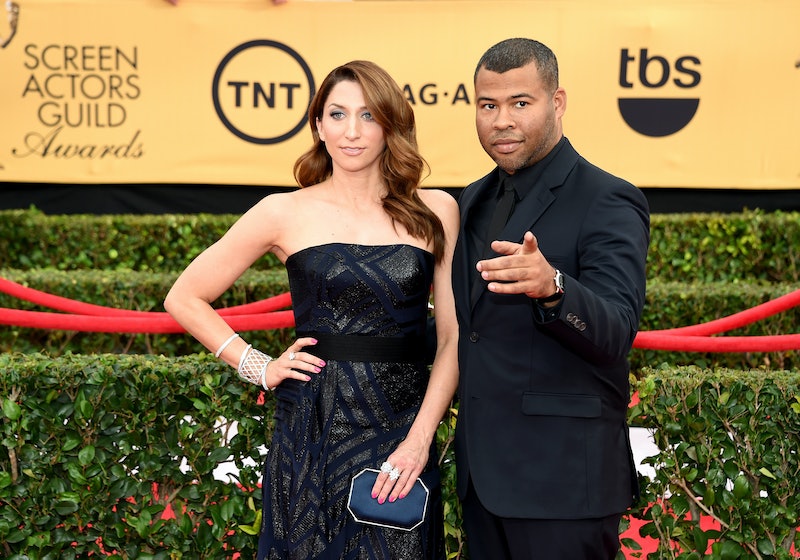 All good things come in pairs, and two comedians seem to understand that. On Saturday, it was announced via Twitter that Jordan Peele and Chelsea Peretti are engaged. Peele, the Key & Peele genius, proposed to the Brooklyn Nine-Nine star this weekend, and the duo were quick to share the exciting news of their engagement on Twitter.

Peele and Peretti have been dating for over two years, and it seems they've decided to take the next step in their relationship. Peretti was first to share the news on social media, when the 37-year-old posted a funny tweet to her hundreds of thousands of followers sharing her excitement. It looks like Peele was the one to pop the question, and he did it in front of his and Peretti's friends and family. Aww.

While the Brooklyn Nine-Nine actress took a more traditional social media approach to sharing the news to all of her followers, Peele decided to go for a more... minimalistic approach, tweeting a simple diamond ring emoji with his new fiance's Twitter handle attached, and then retweeting a fan's greeting. Compare the two, equally-great reactions:

Not long after Peele and Peretti tweeted their exciting news, some of their celebrity friends began posting their well wishes. Mindy Kaling, for one, called them a "cool couple."

Meanwhile, Straight Outta Compton's Jason Mitchell seems to believe that Peele and Peretti will make wickedly cool parents one day. Imagine "Bring Your Kids to School Day" with these two!

And then there's Seth Green, who simply wished them congratulations.

Tis the season for sleigh rides, jingle bells, and engagement rings! Funny people Peele and Peretti have a fun road ahead of them. Congratulations to the newly-engaged pair!