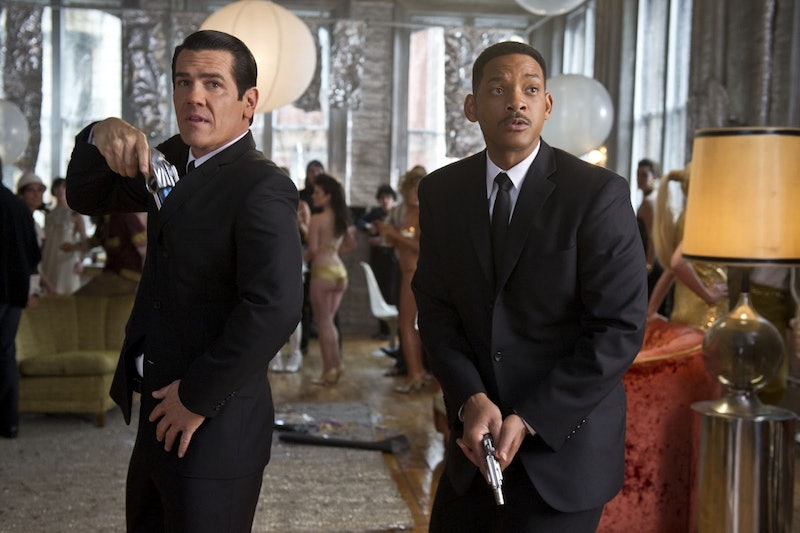 The men in black are back at it again, and this time, there's a new addition to the group: a woman. The Men In Black franchise is returning with a fourth installment to the series, and for the first time, a female agent will join the Men in Black. Speaking to the BBC, producer Laurie MacDonald said that “there will be a prominent Woman in Black in the fourth" film, which is a pretty freakin' huge deal.

It's not that there haven't been big female characters in the series before; the first film depicted the character of Laurel Weaver, but she had a minor role and wasn't seen in the following films. And then there was Lara Flynn Boyle's Serleena, a villain, but again — not a main agent. But now there just might be, and it's an incredibly significant change to the franchise. A female agent could breathe new life into this film, and reinvigorate interests for MIB movies to come in the future. The creators could also present a more female-focused story line, which hasn't been seen in any of the movies. Even better? Since producers have the ability to refocus this film and make it brand new, there could even be the possibility of a Women In Black film franchise of its own.

The sky is the limit with this series, and there is sure to be far more to come if this fourth film sees success. A franchise — or at the very least, one big movie — featuring women kicking some intergalactic butt? It could be the start of something very, very cool. Perhaps female Men in Black actors like Linda Fiorentino (who played Laurel) will reprise their roles in the newest film, but that doesn't seem likely considering the new movie may be an entirely different cast all together (even the films' biggest star, Will Smith, is not yet attached to reprise his role as Jay, according to MacDonald).

As for an actual release date, even that's unclear; the last film in the franchise, Men In Black 3, which was released in 2012, and MacDonald told the BBC that development is still in the very early stages. But whatever ends up happening with the fourth movie, it's clear that the Men in Black producers are at least set on adding a woman agent into the mix, and that's something to celebrate.