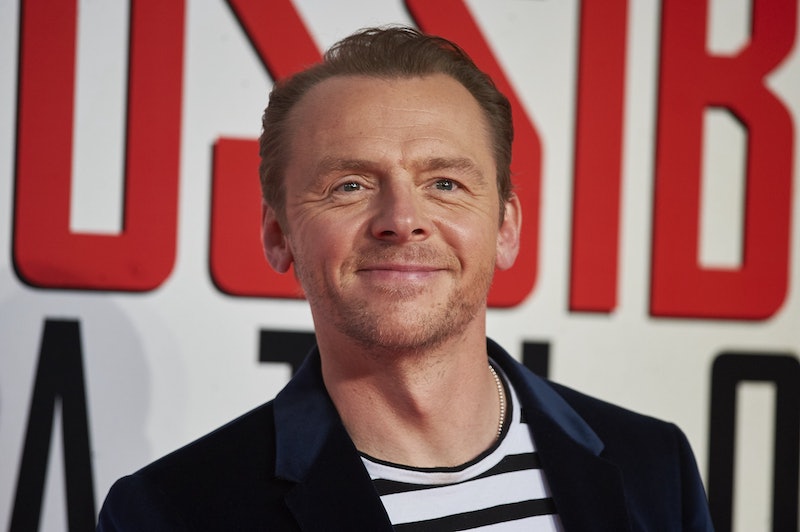 It's here! It's finally here! During production of Star Wars: The Force Awakens, rumors were ablaze that long-time J.J. Abrams collaborator, Simon Pegg, would be making a cameo in a galaxy far, far away. This summer, the sizzle reel from Comic-Con confirmed Pegg's participation and gave some important clues about his character. And now, the first look at Simon Pegg in Star Wars: The Force Awakens has been revealed. This latest Star Wars 7 information comes from a behind-the scene featurette that aired on the Disney Channel this past week.

Rumors about Pegg's involvement with Star Wars: The Force Awakens had been circulating since before production on the film even began. Pegg and Abrams had previously worked together as actor and director, respectively, on Mission: Impossible III and the Star Trek films. This close relationship and shared loved of nerd-lore lead many to believe that Pegg would at least make a cameo in the new Star Wars film. Then the Comic Con sizzle reel aired and Star War fans lost their minds. Not only did the reel show Pegg in all of his nerdy glory, but it had him comparing the set of The Force Awakens to heaven (aww, so cute). But it is not what he said that got the fans all riled up — it was the fact that tucked into the middle of the sizzle clip was Pegg, just hanging out in his alien costume like it was no big deal.

Well, it is a big deal, Simon! Everyone's favorite nerdy funnyman is appearing in Star Wars 7, he's part of the canon. And now, we are weeks away from the film's release, with, finally, one new piece of information released about Pegg's character — and it's a big one. See this?

Yup, that's Pegg looking like a blobfish and fitting in perfectly with the Star Wars universe. And while you can't see his face, I am certain this creature is Pegg. His character had been rumored to have a down-turned nose (check) and this guy is wearing the same shirt as Pegg in the sizzle reel (double check). That leaves only one question. Who is this blobfish-looking guy?

According to MakingStarWars.net, his name is Unkar Plutt. We know, according to The Force Awakens Lego sets, that there are characters described as Unkar henchman and thugs. But if this dude has his own Lego henchmen, it has to mean that Pegg as Unkar Plutt plays a larger part in the Star Wars universe than his announced "cameo" would first suggested.

I didn't think I could get any more excited about Star Wars: The Force Awakens but boom, Simon Pegg is a blob-faced alien and I couldn't be happier. Check out the entire behind-the scenes featurette, "All About Rey," for more goodies here: