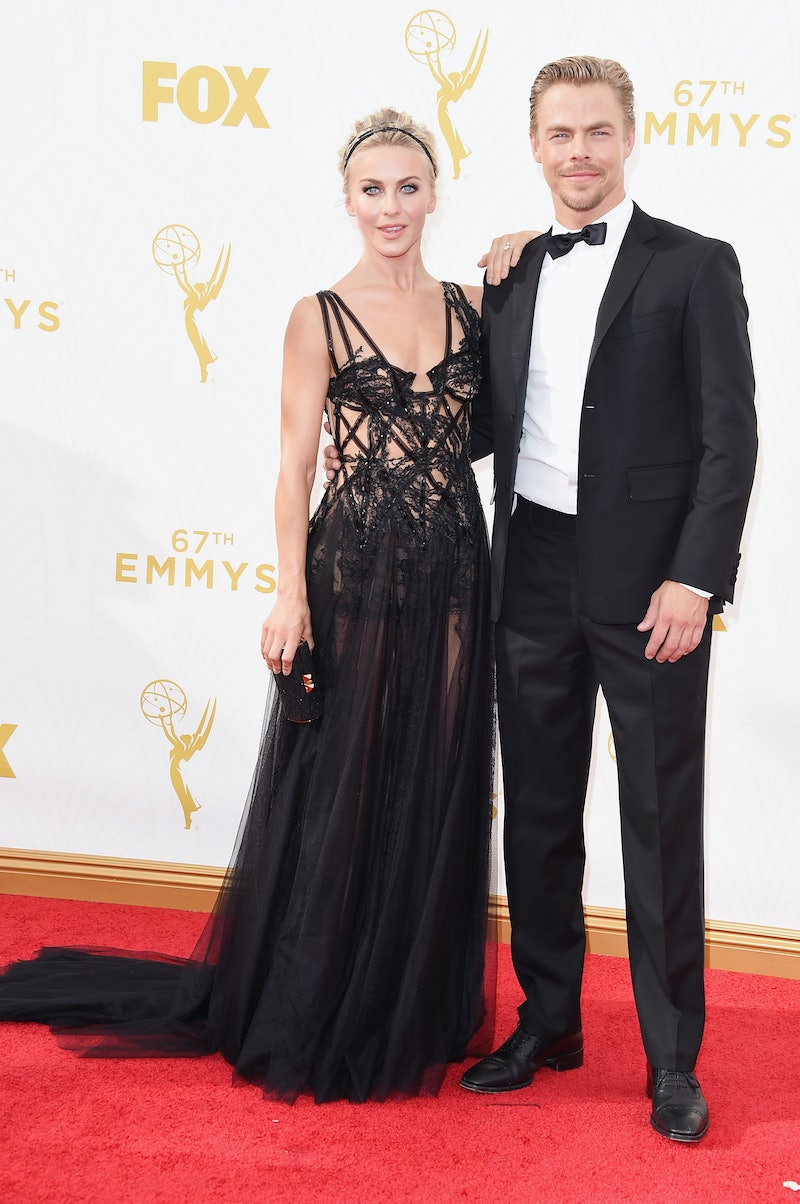 Professional dancer siblings Julianne and Derek Hough are best known for tearing up the dance floor on Dancing With The Stars. Derek won his sixth mirror-ball trophy last week with Bindi Irwin, and Julianne is preparing to dance and sing as Sandy in Fox's upcoming Grease: Live! musical. But before all of that, Derek and Julianne Hough were in Harry Potter and the Sorcerer's Stone in 2001. Yes, really: it's true, and apparently, the duo decided not to tell anyone about this incredible feat. I mean, how do you not brag about the fact that you attended Hogwarts, the most famous fictional wizarding school around? Color me jealous.

Both Derek and Julianne make cameos in the movie, along with DWTS pro dancer Mark Ballas, as discovered by Refinery29. All three of them appeared as Hogwarts extras and, according to MTV News, Derek was in Ravenclaw, Julianne was in Gryfindor, and Ballas was placed in Hufflepuff. You can see Hough in a scene in the first Harry Potter film in which Ron and Harry play chess and Hermione comes in through double doors. "You can clearly see [Derek] walking by with an owl, like hamming it up too," Ballas told MTV. "He’s walking by hamming it up in a Ravenclaw outfit."

As for Julianne, she is very clearly featured in this shot from Harry Potter and the Sorcerer's Stone next to Dean Thomas, played by future How To Get Away With Murder star Alfred Enoch.

So how on Earth did these professional dancers end up at Hogwarts? As pre-teens, Derek and Julianne trained with Mark Ballas' parents Corky and Shirley in London. "We went to a performing arts music school, so that’s where I studied music and I studied theater," Ballas told MTV. "All the top schools for that in London, all the students were extras." How cool!

Since then, the Hough siblings have continued to light up the screen. In addition to Dancing With The Stars, Julianne has starred in the movies Burlesque, Footloose, Rock of Ages, Safe Haven, and Paradise. Derek has guest starred on the TV series Better With You, and Nashville, along with doing theater on Broadway and in London's West End.

But isn't awesome that Derek and Julianne got their start at Hogwarts in a Harry Potter film? You can't ask for a better beginning than that.