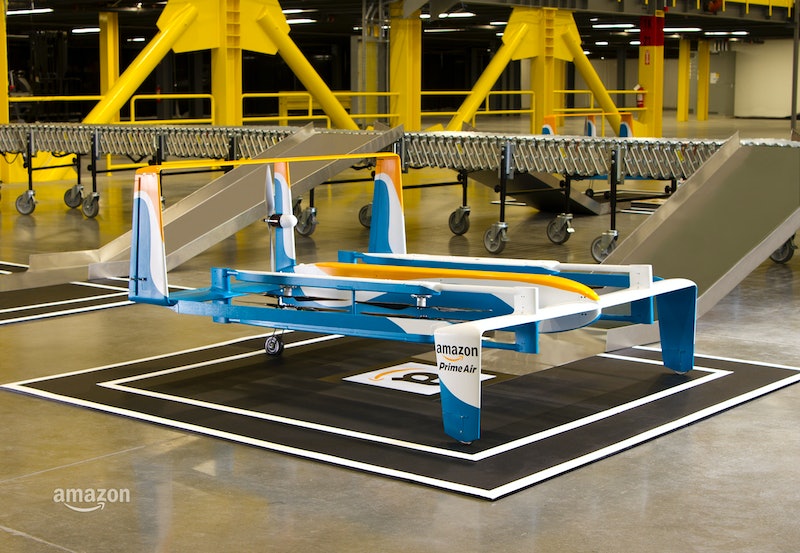 Amazon has more to tease us with than just rock-bottom prices this Cyber Monday. It's possible that at this time next year, your Christmas gifts could arrive in less than 30 minutes of flight time — yes, flight time. That's because the online retailer seems bound and determined to turn drone delivery into a reality. On Sunday, Amazon released a new video of a drone delivery. It makes the service, dubbed "Prime Air," look not just like something out of a science fiction novel, but also a very real possibility.

The Amazon drone itself has received a facelift since the company's CEO Jeff Bezos first announced the plans in 2013 on CBS' 60 Minutes. In the new video, we are walked through a potential drone-to-the-rescue retail emergency presented by British broadcaster Jeremy Clarkson. A girl's soccer cleat is eaten by the family bulldog, so what does mom do? Order a replacement pair on Amazon, with delivery promised in 30 minutes or less.

After mom places the order on her tablet, the video jumps to the warehouse. The package is brought to the drone in a blue Prime Air-branded box. The drone itself looks pretty good, too — you can check it out on Amazon's Prime Air page. Its blue-and-yellow paint job, with the Amazon logo prominently featured, seems to be an upgrade from the first design. This time, the package is also stored inside a compartment in the drone — not hanging from below, as seen in the version we were introduced to in 2013.

According to Clarkson's voiceover, the drone takes off in vertical mode, reaching 400 feet above the ground before switching to horizontal mode, at which point some drones can fly as far as 15 miles. During flight — as well as takeoff and landing — the drone uses sensors to avoid other objects in the air and on the ground. Notably, the shots of the drones flying are all identified as real flight footage and not simulations. Make no mistake, this technology is happening now.

At the end of the video, the drone zeroes in on an Amazon logo in the family's backyard. Mom's tablet receives a notification that the package is arriving, and she runs out to get it. She picks up not only the package, but the Amazon logo the package was dropped onto.

Two years ago, Amazon announced that the drone delivery service would start some time in 2015, but FAA regulations have delayed the project. Current rules require drone pilots to be within a direct line of sight of the drones to operate them legally. That may change, though. The FAA has made some recent headway in exploring drone rules and regulations. Last week, the FAA's drone committee released its final report on how drones will need to be registered based on size, and new line of sight recommendations could follow.

Regardless of when the FAA gives the go-ahead, the biggest takeaway from Sunday's video is the viability of the technology. It's not just a marketing ploy. There's no doubt that an Amazon drone will be landing in your neighborhood someday soon. It's not a matter of how, but when.