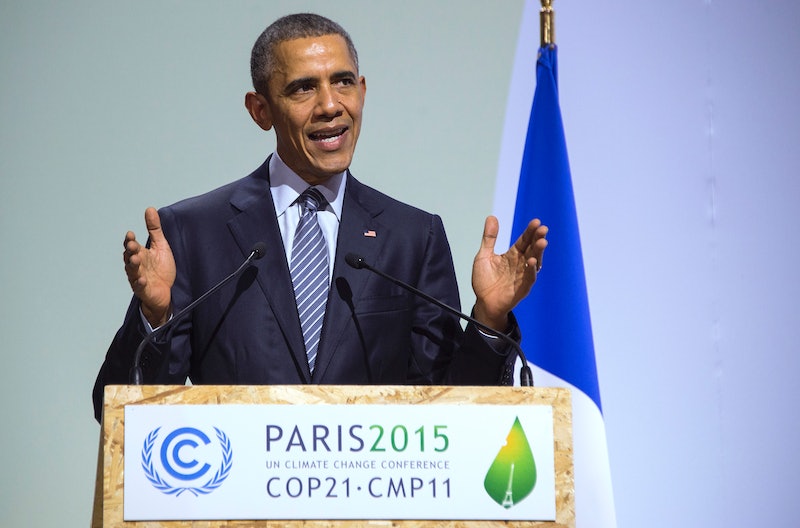 In an attempt to bring together nearly 150 leaders from around the world on the issue of climate change, President Barack Obama spoke at the U.N.'s climate change summit in Paris to a packed house. Following the president of Paraguay and one of Morocco's princes (the king lost his voice), Obama extolled the importance of the current generation in the attempt to cut emissions and reduce global rises in temperatures.

Obama called on world leaders to take responsibility and act. "We are the first generation to feel the impact of climate change and the last generation that can do something about it," Obama said. It is one of his favorite quotes on climate by Washington State Gov. Jay Inslee. He acknowledged the United States' oversize role in creating the current problem, but he also said the country is ready to "do something about it."

He started his speech acknowledging the terrorist attacks in Paris that have caused for beefed up security at the conference but also a feeling of solidarity among attendees. He framed the conference as a way to stand up to the assault on democratic values by showing that "nothing will deter us from building the future we want for our children." Speaking for more than 14 minutes (about 11 more than the U.N. had requested), Obama called for a transparent long-term, enduring framework that would guide climate policy for years to come.

The speech was Obama's second act at the summit. Before his remarks he met with China's President Xi Jinping, head of the world's most-polluting economy. The United States held the title before China overtook it in 2007. The two countries, home to the world's largest economies in addition to CO2 emissions, will be vital to any agreement in Paris. Obama said cooperation between the nations has been fruitful. "Our leadership on this issue has been absolutely vital," he told Xi.

Nearly 150 world leaders plus many more journalists and officials are in Paris for the climate summit. The goal of the talks is to reach a deal that would replace the Kyoto Protocol to limit carbon and greenhouse gas emissions. Obama's remarks will be followed by those of a long list of heads of state including President Xi, German Chancellor Angela Merkel, and Russian President Vladimir Putin.

Here is the full text of Obama's speech, courtesy of the White House.

President Hollande, Mr. Secretary General, fellow leaders. We have come to Paris to show our resolve.

We offer our condolences to the people of France for the barbaric attacks on this beautiful city. We stand united in solidarity not only to deliver justice to the terrorist network responsible for those attacks but to protect our people and uphold the enduring values that keep us strong and keep us free. And we salute the people of Paris for insisting this crucial conference go on — an act of defiance that proves nothing will deter us from building the future we want for our children. What greater rejection of those who would tear down our world than marshaling our best efforts to save it?

Nearly 200 nations have assembled here this week — a declaration that for all the challenges we face, the growing threat of climate change could define the contours of this century more dramatically than any other. What should give us hope that this is a turning point, that this is the moment we finally determined we would save our planet, is the fact that our nations share a sense of urgency about this challenge and a growing realization that it is within our power to do something about it.

Our understanding of the ways human beings disrupt the climate advances by the day. Fourteen of the fifteen warmest years on record have occurred since the year 2000 — and 2015 is on pace to be the warmest year of all. No nation — large or small, wealthy or poor — is immune to what this means.

This summer, I saw the effects of climate change firsthand in our northernmost state, Alaska, where the sea is already swallowing villages and eroding shorelines; where permafrost thaws and the tundra burns; where glaciers are melting at a pace unprecedented in modern times. And it was a preview of one possible future — a glimpse of our children's fate if the climate keeps changing faster than our efforts to address it. Submerged countries. Abandoned cities. Fields that no longer grow. Political disruptions that trigger new conflict, and even more floods of desperate peoples seeking the sanctuary of nations not their own.

That future is not one of strong economies, nor is it one where fragile states can find their footing. That future is one that we have the power to change. Right here. Right now. But only if we rise to this moment. As one of America's governors has said, "We are the first generation to feel the impact of climate change, and the last generation that can do something about it."

I've come here personally, as the leader of the world's largest economy and the second-largest emitter, to say that the United States of America not only recognizes our role in creating this problem, we embrace our responsibility to do something about it.

Over the last seven years, we've made ambitious investments in clean energy, and ambitious reductions in our carbon emissions. We've multiplied wind power threefold, and solar power more than twentyfold, helping create parts of America where these clean power sources are finally cheaper than dirtier, conventional power. We've invested in energy efficiency in every way imaginable. We've said no to infrastructure that would pull high-carbon fossil fuels from the ground, and we've said yes to the first-ever set of national standards limiting the amount of carbon pollution our power plants can release into the sky.

The advances we've made have helped drive our economic output to all-time highs, and drive our carbon pollution to its lowest levels in nearly two decades.

But the good news is this is not an American trend alone. Last year, the global economy grew while global carbon emissions from burning fossil fuels stayed flat. And what this means can't be overstated. We have broken the old arguments for inaction. We have proved that strong economic growth and a safer environment no longer have to conflict with one another; they can work in concert with one another.

And that should give us hope. One of the enemies that we'll be fighting at this conference is cynicism, the notion we can't do anything about climate change. Our progress should give us hope during these two weeks — hope that is rooted in collective action.

Earlier this month in Dubai, after years of delay, the world agreed to work together to cut the super-pollutants known as HFCs. That's progress. Already, prior to Paris, more than 180 countries representing nearly 95 percent of global emissions have put forward their own climate targets. That is progress. For our part, America is on track to reach the emissions targets that I set six years ago in Copenhagen — we will reduce our carbon emissions in the range of 17 percent below 2005 levels by 2020. And that's why, last year, I set a new target: America will reduce our emissions 26 to 28 percent below 2005 levels within 10 years from now.

So our task here in Paris is to turn these achievements into an enduring framework for human progress — not a stopgap solution, but a long-term strategy that gives the world confidence in a low-carbon future.

Here, in Paris, let's secure an agreement that builds in ambition, where progress paves the way for regularly updated targets — targets that are not set for each of us but by each of us, taking into account the differences that each nation is facing.

Here in Paris, let's agree to a strong system of transparency that gives each of us the confidence that all of us are meeting our commitments. And let's make sure that the countries who don't yet have the full capacity to report on their targets receive the support that they need.

Here in Paris, let's reaffirm our commitment that resources will be there for countries willing to do their part to skip the dirty phase of development. And I recognize this will not be easy. It will take a commitment to innovation and the capital to continue driving down the cost of clean energy. And that's why, this afternoon, I'll join many of you to announce an historic joint effort to accelerate public and private clean energy innovation on a global scale.

Here in Paris, let's also make sure that these resources flow to the countries that need help preparing for the impacts of climate change that we can no longer avoid. We know the truth that many nations have contributed little to climate change but will be the first to feel its most destructive effects. For some, particularly island nations — whose leaders I'll meet with tomorrow — climate change is a threat to their very existence. And that's why today, in concert with other nations, America confirms our strong and ongoing commitment to the Least Developed Countries Fund. And tomorrow, we'll pledge new contributions to risk insurance initiatives that help vulnerable populations rebuild stronger after climate-related disasters.

And finally, here in Paris, let's show businesses and investors that the global economy is on a firm path towards a low-carbon future. If we put the right rules and incentives in place, we'll unleash the creative power of our best scientists and engineers and entrepreneurs to deploy clean energy technologies and the new jobs and new opportunities that they create all around the world. There are hundreds of billions of dollars ready to deploy to countries around the world if they get the signal that we mean business this time. Let's send that signal.

That's what we seek in these next two weeks. Not simply an agreement to roll back the pollution we put into our skies, but an agreement that helps us lift people from poverty without condemning the next generation to a planet that's beyond its capacity to repair. Here, in Paris, we can show the world what is possible when we come together, united in common effort and by a common purpose.

And let there be no doubt, the next generation is watching what we do. Just over a week ago, I was in Malaysia, where I held a town hall with young people, and the first question I received was from a young Indonesian woman. And it wasn't about terrorism, it wasn't about the economy, it wasn't about human rights. It was about climate change. And she asked whether I was optimistic about what we can achieve here in Paris, and what young people like her could do to help.

For I believe, in the words of Dr. Martin Luther King, Jr., that there is such a thing as being too late. And when it comes to climate change, that hour is almost upon us. But if we act here, if we act now, if we place our own short-term interests behind the air that our young people will breathe, and the food that they will eat, and the water that they will drink, and the hopes and dreams that sustain their lives, then we won't be too late for them.

And, my fellow leaders, accepting this challenge will not reward us with moments of victory that are clear or quick. Our progress will be measured differently — in the suffering that is averted, and a planet that's preserved. And that's what's always made this so hard. Our generation may not even live to see the full realization of what we do here. But the knowledge that the next generation will be better off for what we do here — can we imagine a more worthy reward than that? Passing that on to our children and our grandchildren, so that when they look back and they see what we did here in Paris, they can take pride in our achievement.

Let's get to work. Thank you very much.