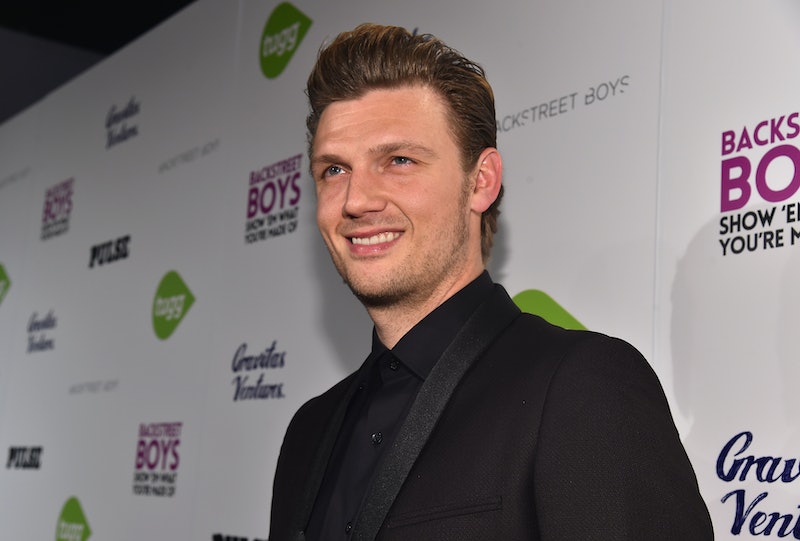 Backstreet's back... sort of! Recently, former Backstreet Boy Nick Carter premiered "Get Over Me," his new single with Canadian pop-rocker Avril Lavigne. Talk about an unexpected pairing! (Carter announced the surprising collaboration during a Q&A session on Twitter at the end of October.) "Get Over Me" is a catchy throwback to Lavigne's pop-punk sound circa 2007 (when "Girlfriend" was popular), but unfortunately, its lyrics may be off-putting for some listeners. The Nick Carter "Get Over Me" lyrics find the two artists singing about dealing with an obsessive partner in a casual (and almost dismissive) way that undercuts the seriousness of their respective situations.

For example, in the first verse, Carter sings: "I messed up, took you home / Just my luck, you're a psycho / Now I'm locking up my door / You had my mail, stole my phone / And how the hell did you change my passcode? / I can't take this anymore." Yikes. Things just get worse in Lavigne's verse: "You broke in, stole my key / Got one made so you can watch me / Even when I am asleep (You creep) / But that's not where the story ends / You follow me like every weekend / And you're freaking out my friends." Whoa. There's a pretty big disconnect between the song's troubling lyrics and its light, playful tone.

Here's the chorus: "Now I've got a stage five clinger / Tryna put a ring on my finger / Only want me 'cause I'm a singer / (Hey!) Get over me." Check out "Get Over Me" for yourself below.

I suspect people who have had an obsessive and/or abusive partner in the past may not appreciate the way "Get Over Me" handles the sensitive subject. However, if you're somehow able to look past the track's lyrics, you might be able to enjoy its upbeat pop-rock production. "Get Over Me" serves as the official second single from Carter's third solo album, All American. The LP is available on iTunes and Spotify now.