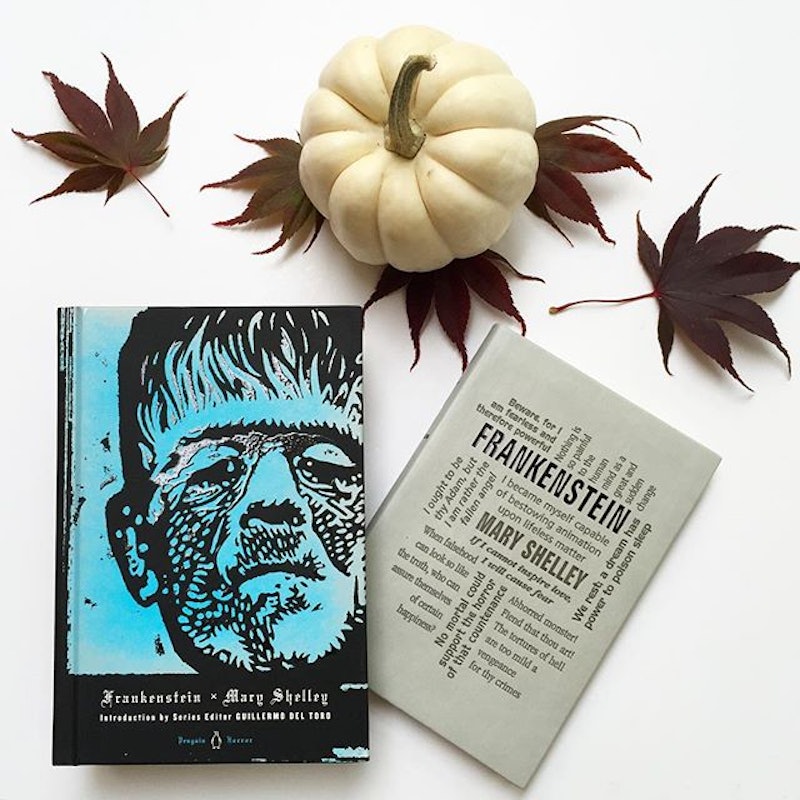 While you were preparing pumpkin pie for Thanksgiving or trying to avoid your old high school classmates at the neighborhood bar the night before, writer Sady Doyle was tweet-storming an incredible theory on Mary Shelley's classic novel Frankenstein . You may want to dust off your copy for this. What if the monster is not representative of a man's hubris gone wild, as you probably learned in high school, but Mary Shelley's older half sister Fanny Imlay?

What does Fanny have to do with a misshapen undead creature? Well, I'll let Sady outline it herself, who tweeted out her theory in response to the Victor Frankenstein director Paul McGuigan's dismissal of the novel as being as "dull as dishwater."

I'll give you a second to pick yourself up off the floor. Even as a major nerd myself, I never saw this theory coming.

In an email to Bustle, Sady told us that her reading of Frankenstein was inspired by her research into writer and feminist Mary Wollstonecraft, Mary and Fanny's mother:

A lot of Wollstonecraft's story — particularly the scandal that disgraced her after her death, when it was revealed that she had an active premarital sex life — centers around Fanny's birth, and Gilbert Imlay's abandonment of them both.

As the author of A Vindication of the Rights of Woman, Wollstonecraft was already considered radical in her time, but even more so for her having a daughter out of wedlock. While Mary Shelley never knew her mother, who died during childbirth, her legacy reverberated through her life, with Mary embracing a liberal lifestyle that involved running off with the married Percy Bysshe Shelley.

But where does this leave Fanny? As the older, scarred, and "illegitimate" sister, she remained with her step-father William Goldwin and his wife Mary Jane Clairmont, only to commit suicide at 22 in 1816, the same year Mary stayed with Percy in Geneva and began to consider the story of Frankenstein. It was also written in the wake of Mary's loss of her daughter who was born premature.

As Sady noted, this is one reading of Frankenstein and the lives of Mary Shelley and her half-sister Fanny. Even if it's not what was intended, it is worth remembering just how radical how Frankenstein was and is. As Sady noted,

One of the most important things we can do is look for the women in our past. That means validating how central women like Mary Shelley are — horror and (as readers pointed out) sci-fi simply would not be what they are without her.

"And it means looking for women like Fanny, who recede into the background and get lost somewhere along the way," she added. So whether or not you think that Mary Shelley intended the monster to be read as version of her sister, it is worth moving Frankenstein up your reading list.