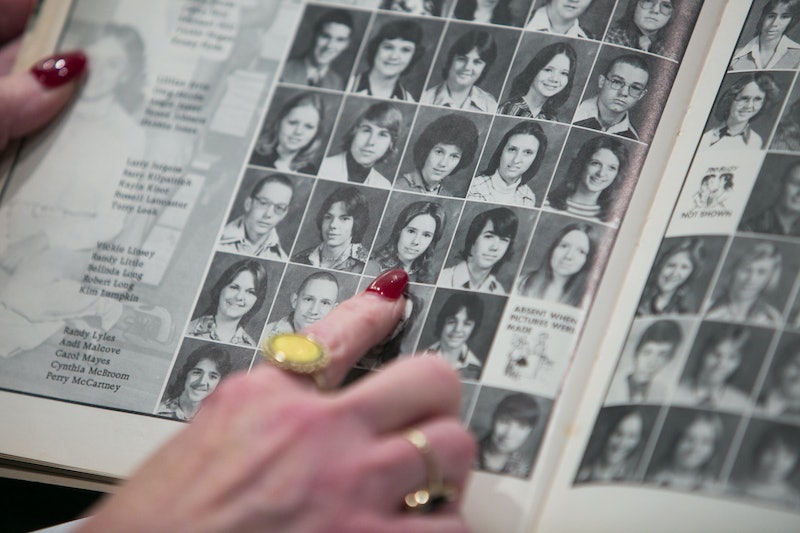 I don't know about you, but I'd love to never look at my high school yearbook senior photo again. I can picture it clearly in my mind's eye: My hair, straightened with an iron and a little frizzy, because I didn't know how to deal with curly hair yet; my eyes, one slightly out of focus because I rushed to put in my contacts that morning and somehow decided that one was enough even on school picture day; my outfit, a button-up shirt in a gross shade of yellow that didn't fit me well. Worst of all is my dumb, forced smile — which, it turns out, is counter to the norm according to the evolution of yearbook photos over the past few decades or so. For some reason, I had decided not to actually show my teeth that day, leaving me smirking at the camera; according to a new study, however, the typical female subject in yearbook photos has gone with an open mouth grin since the 1950s. I imagine it's to show off all the advances in orthodonture we've had since the first half of the 20th century.

The UC Berkley study also found that the "smile intensity" of yearbook photos has gone up (in other words, our smiles are getting bigger and faker, since no one is happy on yearbook photo day), and women's hair is more likely now than ever to be worn down and long. Click through and take a look at this composite of average yearbook photos by decade and gender, compiled from nearly a thousand photos from across the United States. Wacky, no?

This study wasn't really about the yearbook photos themselves, though — the researchers wanted to show that it's now possible to do large-scale visual data mining. It's now possible to take hundreds of visual artifacts from a decade, combine them into a mean photo, and compare them to a contemporary photo — something that may make historical research faster than ever before. "By treating large historical photo collections as a whole, we expect to learn things that cannot be inferred from the inspection of a small number of artifacts in isolation," wrote the researchers. For instance, I learned that women are happier than men since they started open-mouth smiling decades before men did (warning: this conclusion may not be scientifically valid). This kind of composite tool can also help historians estimate a date for photos.

All I hope is that they never use my high school yearbook photo in the creation of one of these composite images. They'll throw the whole thing off.