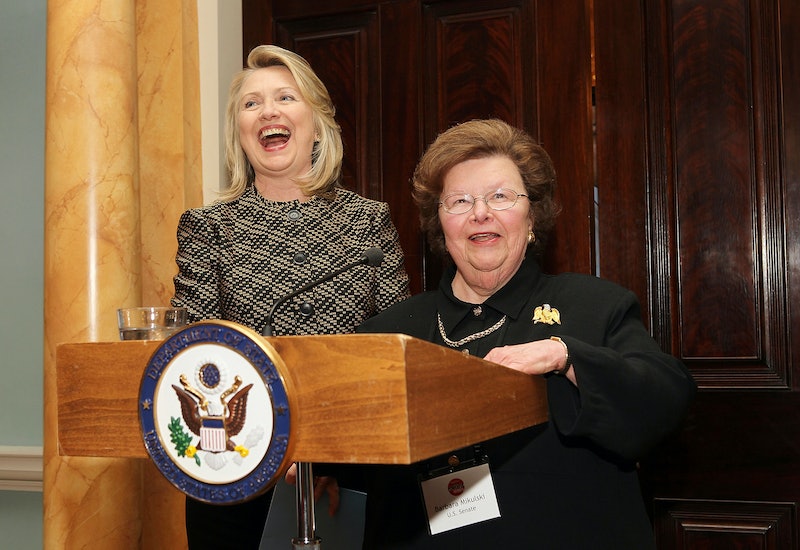 If ever there were a friendship more epic than that between Hillary Clinton and Maryland Sen. Barbara Mikulski, you'd be hard-pressed to find it. On Monday, with the State Department's release of nearly 8,000 pages' worth of emails from the former Secretary of State's private server, reporters and curious citizens alike perused a trove of memorable emails between Clinton and Mikulski, many of which seemed more suited to secretive text messages between two besties than to be filed in the archives of a high-ranking U.S. official. Peppered with words like "sparkly" and conversations about Downton Abbey, the humanizing revelation seemed to come at just the right moment for Clinton — whose lead in certain major polls has been thrown into uncertainty, thanks in large part to roller coaster numbers out of rival Bernie Sanders' camp and news that at least a handful of the latest emails were potentially flagged as classified (oops).

"Loved ... the Downton Abbey schtick," wrote Mikulski, referencing Clinton's love for the popular British television show in an email dated January 29, 2013. (Prior to Clinton's departure from the State Department that month, the ITV/PBS cast sent a video message to the Secretary, bidding her a fond farewell, which was aired during a private dinner thrown by U.K. Foreign Secretary William Hague.) "Am a fan," Mikulski wrote. "R U?"

The adorable exchange didn't stop there. "What a terrific time," Mikulski wrote, remarking on the farewell dinner itself. "... Most of all [loved] seeing you — so fit n sparkly — as well as Prez Bill, Chelsea n Uma." (Leaving aside the nearly unreadable text itself, go ahead and "aww" with me for a minute.)

Here are a few more Clinton/Mikulski gems dug up from the latest round of State Department emails.

As The Guardian 's Stuart Heritage joked in July this year after a previous email release, "Barbara Mikulski is either drunk all the time, has the fattest thumbs in history or is a noted beat poet." Whatever the case may be, the 79-year-old senator must really love punctuation marks. Or she really wants you to know that Hillary. Clinton. Is. The. Best. I'm on board either way.

Barb Is There 4 U

When Mikulski eventually leaves the Senate, perhaps she should consider a job as a motivational speaker, because her emails to Clinton are truly inspiring — in the same way that your mom's emails to you in college gave you a much-needed boost before a particularly rough exam, at least. "Dear. Friend. U. R. Doing such a terrific job," wrote the senator in one email dated September 20, 2012, just days after the attack on the American consulate in Benghazi, Libya. "Even Bfore recent tumult n tragedies. U. R just the best. Count on me - as always ur friend."

Once you get past the confusing punctuation, you have to admit that it's all pretty galvanizing.

Barbara's not like your other friends, who have to rely on Facebook to wish you a happy birthday. She's on top of it. In a cheery email dated November 14, 2012, Mikulski messaged Clinton to send her birthday greetings and a little inspiring cheer. "A. Lucky Day for the. Planet. When u. Were. Born," she wrote. "We. R going to make it. Whoopee [...] !!!" Considering all the trouble plaguing the Secretary of State at the time, "Whoopee" seems like an appropriate sentiment. Thanks, Barb!

No word yet on whether Mikulski actually wrote this one or had an assistant take dictation ... but it's adorable nonetheless. In an encouraging email marked June 6, 2012, the Maryland senator made sure to commend Clinton on her work as Secretary up until that point, remarking on a handful of pressing foreign policy issues and leaving her with a bit of inspiration, in traditional Mikulski style. "It definitely makes me sleep better at night knowing that you are leading America's foreign policy," she wrote.

On June 9, Clinton responded in kind. "Thanks for the kind words about our Ambassadors and your insightful comments about what we're facing," Clinton replied, adding mysteriously that the conversation was "to be continued" at a later date.

If a little platonic love and international affairs talk can't warm your heart, I don't know what will.