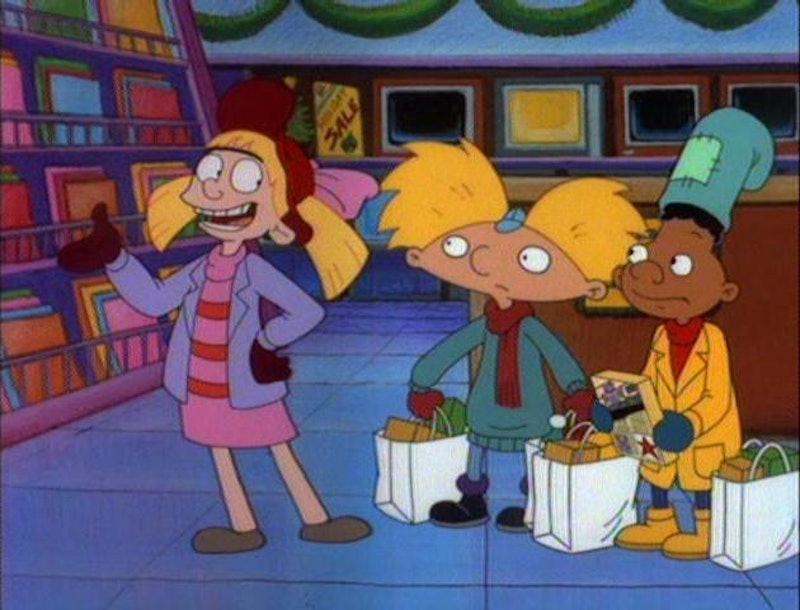 One of my most missed holiday traditions is spending all of Christmas Eve day holed up with my brother watching Christmas specials, footy pajamas on, hot chocolate at the ready. Not to dampen the mood or anything, but the crushing realities of adulthood has regulated these rewatches to digging up whatever I can find on Netflix in a spare moment... and I'm sure you're in the same boat. The tricky thing is it's pretty hard to remember what you should be watching this season. Well, have no fear, I collected some of your favorite nostalgic '90s Christmas episodes to really throw you back to a simpler time.

OK, if I'm gonna be honest here, I really feel like 2000 to 2003 was, like, peak Christmas episode time. Maybe that's because those are my most conscious years of childhood, who knows. But I know how much you kids today love your 1990s, so that's the era I dug from. And there are so many gems! Rugrats! Hey Arnold! People are still all about Full House, right? Yeah, all of it's here. You're welcome.

So, allow me to gift to you this bundle of Christmas joy: 13 hand selected '90s Christmas episodes from some of your old time favorite shows.

It's Christmas in Bluffington, and Pork Chop is under trial for allegedly injuring Bebe. It's not particularly thrilling unless you count the big tizzy over will Pork Chop go away forever for this crime? Will Christmas be ruined? Spoiler: No. Regardless, I'm always for a dog-centric holiday special.

2. "It's A Wonderful Tiny Toon Christmas" From Tiny Toon Adventures

On the surface, it's just your garden variety parody of It's A Wonderful Life (which is done and overdone, just not nearly as much as A Christmas Carol). What makes it a winning piece of entertainment is that Tiny Toon Adventures goes hard on pop culture, leading to impressive accuracy and a figure skating Cher.

3. "The Santa Experience" From Rugrats

Honestly, my favorite part of this is Angelica rushing to make amends before Christmas so she won't end up with coal. Truth be told, I was totally that little monster every Christmas.

4. "A Skooter For Yakmus" From The Ren & Stimpy Show

God, I love all the great traditions associated with Yak Shaving Day. So many fond memories of stapling disposable diapers to the wall with mom and pop.

It's a Pokemon Christmas special with Jynx, I don't think I need to explain myself.

6. "Christmas With The Joker" From Batman: The Animated Series

The entire Batman animated series was perfection, and the Christmas special is up to its usual high standards. I mean, who else would do a better rendition of "Jingle Bells, Batman Smells" than The Joker?

8. "Marge Not Be Proud" From The Simpsons

The Simpsons has over a dozen different Christmas specials, each of varying amounts of greatness. I still maintain that "Simpsons Roasting On An Open Fire" is my favorite (it also tragically doesn't make the cut, debuting at late December of 1989). This is a great pick, though, because Bart's shoplifting incident tackles the emotional turmoil of disappointing a parent perfectly. And just in time for the season!

Cory is all pissy because Topanga is messing with his beloved Christmas traditions, but the Ghost of Christmas Feeny teaches him that, without Topanga, he'll be a pancake-eating monster. Which, yeah, duh.

11. "Deck The Halls" From Fresh Prince Of Bel-Air

I think the important takeaway from this is that Will is basically all proto-Buddy the Elf when it comes to believing in Christmas.

What can I say? Arnold's quest to reunite Mr. Hyunh with his daughter can warm even the Grinchiest heart.

13. "The Strike" From Seinfeld

You know the gist. It's Festivus for the rest of us. Bring your own aluminum pole.

You're welcome, my children of the '90s. Now go forth and fall down a nostalgia hole this holiday season.

More like this
Now That 'Renaissance' Is Here, Let’s Revisit Beyoncé’s First Solo Album From 2003
By Grace Wehniainen
22 Movies On Netflix That Are Perfect For The Whole Family
By Bustle Editors
Josh Peck Shows Love To Jennette McCurdy After Her Shocking 'iCarly' Revelations
By Radhika Menon
At 14, D'Arcy Carden Was Sneaking Out To Parties & Crying Over Kurt Cobain
By Ivana Rihter
Get Even More From Bustle — Sign Up For The Newsletter