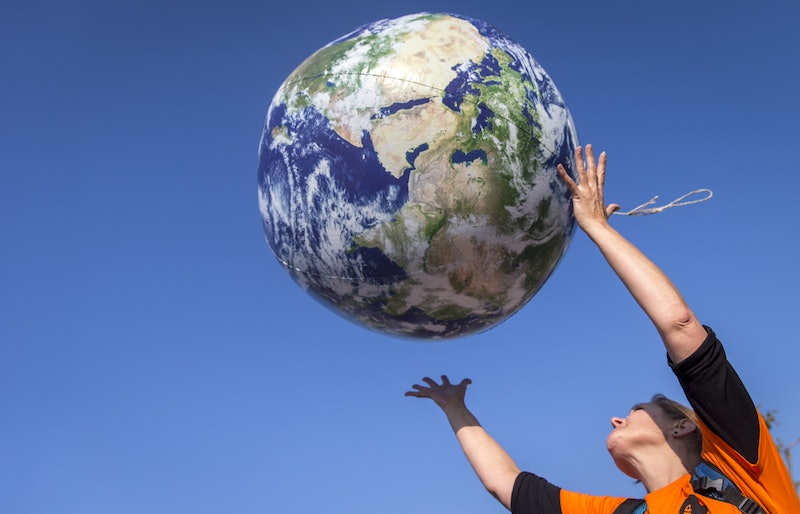 Nearly 150 world leaders are currently convening in Paris for the United Nations' annual Climate Conference. Leaders like President Obama, French President Francois Hollande, and even Russia's Vladimir Putin are recognizing the increasingly urgent issue of climate change, which threatens to wipe out our globe if we don't implement major changes now. The primary goal of this year's conference is to draft a universal agreement on combating climate change signed by every nation in the world. Yes, it's as ambitious as it gets. However, we as individuals can also contribute toward the same important cause. Luckily for us, there are numerous simple life hacks that help combat climate change, so, really, anyone can help save the planet.

Remember how in the opening theme to Captain America, the superhero says, "With your powers combined..."? That's the exact notion we should all keep in mind when addressing environmental concerns. We may not have the power and clout of a government or the funding capabilities of a private company, but we can each make small, everyday changes that, when combined, will go a long way in curbing global warming. Some of these changes might even have the added bonus of saving you money and improving the quality of your own life, so it's a win-win for you and mankind.

If you live close enough to your office, you can reduce your carbon footprint even more by forgoing public transportation and walking or biking instead. Not only are walking and biking great forms of exercise, but they could transform your commute from a hellish experience filled with traffic and packed buses to meditative journeys filled with daydreaming and much-needed alone time.

Air travel leaves behind a major carbon footprint, so whenever possible, choose the bus or train instead. Yes, it will take longer, but you'll likely save money and give yourself more time to finish that stack of New Yorkers that's been piling up in your foyer.

According to a report by the United Nations Food and Agriculture Organization, roughly 18 percent of greenhouse-gas emissions come from livestock farming, which it notes is a higher percentage than caused by transportation. Go meat-free, or at least cut down, to be kind to the planet and your heart.

Cut Down On Dairy

The dairy industry is another major culprit in greenhouse-gas emissions, not to mention other forms of gas emissions — am I right, lactose intolerant friends? Do yourself, your planet, and anyone in your company a favor by cutting down on dairy.

There are all kinds of benefits for this one: your produce will be tastier, you'll be supporting your local small farms, plus you'll be reducing the need to transport foods from distant farms and cutting down the energy it takes to grow out-of-season foods.

Every home should have LED light bulbs today. Given that they last almost 50 times longer than a regular incandescent light bulb, it's a no-brainer. Unless you like spending more money, changing more light bulbs, and adding to the world's energy consumption?

This is also a no-brainer. Unplug the gadgets you're not using — your hair dryer, space heater, air conditioner, blender, etc. — and watch your electricity bill shrink.

Give Your Computer A Break

There are many ways to reduce your computer's energy exertion. When you're using it, dim the brightness of your screen; when you're not using it, turn the damn thing off. It will also help your computer run smoother and prolong its life span.

This should have been drilled into you from an early age, but it's more necessary than ever now. The garbage disposal industry is a major emitter of greenhouse gases and deforestation increases the amount of CO2 in our atmosphere, so by recycling you can help reduce the former and curb the latter.

Waste that builds up in landfills causes methane, the second-most prevalent greenhouse gas in the U.S. from human activity. Rather than letting it reach the landfill, compost as much garbage as you can.

In order to reduce energy and save on your heating bill, insulate your home in the winter so it stays warmer with less heat.

There are numerous ways to save water at home: don't run the water when you're brushing your teeth, shaving, conditioning your hair, etc.; don't overfill your tea kettle, coffee pot, or cooking pot; and definitely take less baths.

By asking companies to enroll you in paperless billing, you'll help save trees, which are a powerful tool for absorbing CO2. According to the website ClimateAndWeather.net, "more than 1.5 billion tons of carbon dioxide are released to the atmosphere due to deforestation."

More like this
All The Most Stylish Winter Wardrobe Staples You Can Buy On Walmart.com
By Jessie Quinn
Here's How To Support Jewish People Amid Rising Antisemitism
By Hannah Orenstein
Here's The Role Lady Susan Hussey Played At Buckingham Palace
By El Hunt
Prince William Condemns “Unacceptable” Comments Made To A Black Guest At Buckingham Palace
By Shahed Ezaydi
Get Even More From Bustle — Sign Up For The Newsletter