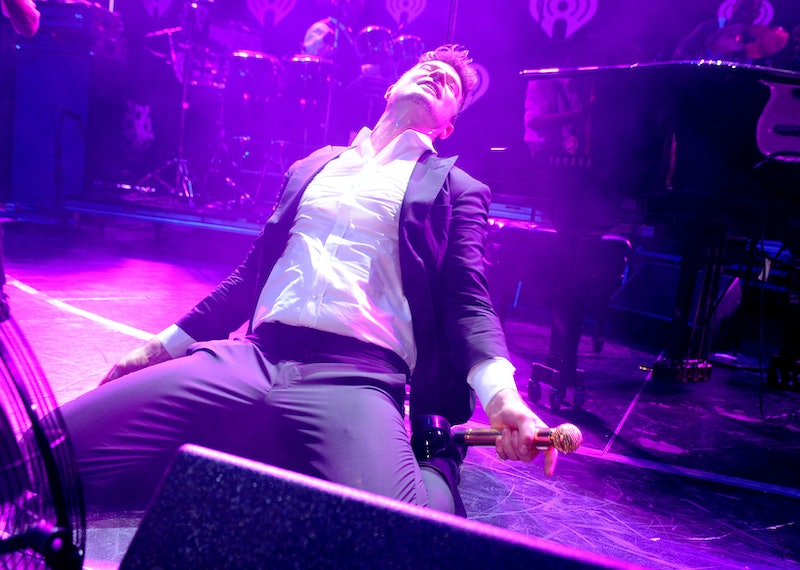 Long after "Blurred Lines" faded into filler-song obscurity on pop radio, the lawsuit Marvin Gaye's family brought against Robin Thicke's label Sony has been settled, so now we can all officially go about forgetting all the "Blurred Lines" messiness that occurred over the summer. Gaye's family was alleging that Thicke copied Marvin Gaye's song "Got To Give It Up," but rest assured, Robin Thicke fans, he is officially out of hot water. Which is great, because there just isn't room for two controversial chart toppers, and Kanye West's "Bound 2" is currently giving "Blurred Lines" a run for its money.

West, currently making headlines for assaulting a teenager, was making headlines not so long ago over a copyright lawsuit brought against him by Ricky Spicer, the singer responsible for the "I'm falling in love" sample that West uses liberally throughout his hit song. And the similarities between the "Blurred Lines" controversies and "Bound 2" controversies are significant.

Let's have a momentary think about this. Headline-making topless chicks in the video? Check for both. Copyright infringement issues? Check. Artists with interesting love life situations? Check! Confusing use of four legged mammals like horses and goats? Err... check. Chart-topping singles by men we love to hate? Well would you look at that, check check check.

There's only room for one buzzworthy hate-listen on the pop charts at a time, and sorry "Blurred Lines," but your 15 minutes is more than over. The only notable differences are that "Bound 2" is kind of a better song, and that Robin Thicke dared to include nipples in his sexy boobular video, which is more than Kanye or Kim Kardashian can say. Were these two mildly obnoxious songs to face off, we're not sure who the winner would be, or even what the contest would be, because just, eew.

What it comes down to is the sort of depressing conclusion that a.) there will always be awkward naked lady videos in the top 40, and b.) the insufferable male pop star trope expands far beyond Kanye West or Robin Thicke and will probably never die because at the very least, Justin Bieber has a lot of good years ahead of him, and he hasn't had his own copyright infringement suit yet.

More like this
Justin & Hailey Bieber's Bond Is "Unbreakable" Amid His Ramsay Hunt Diagnosis
By Bustle Editors
Justin Bieber Says It’s “Getting Harder To Eat” After His Facial Paralysis Reveal
By Brad Witter
Kim Kardashian Father’s Day Tribute To Kanye West Called Him “The Best Dad”
By Stephanie Topacio Long
Photos Of The 'Elvis' Cast vs. Their IRL Counterparts Will Have You All Shook Up
By Grace Wehniainen
Get Even More From Bustle — Sign Up For The Newsletter