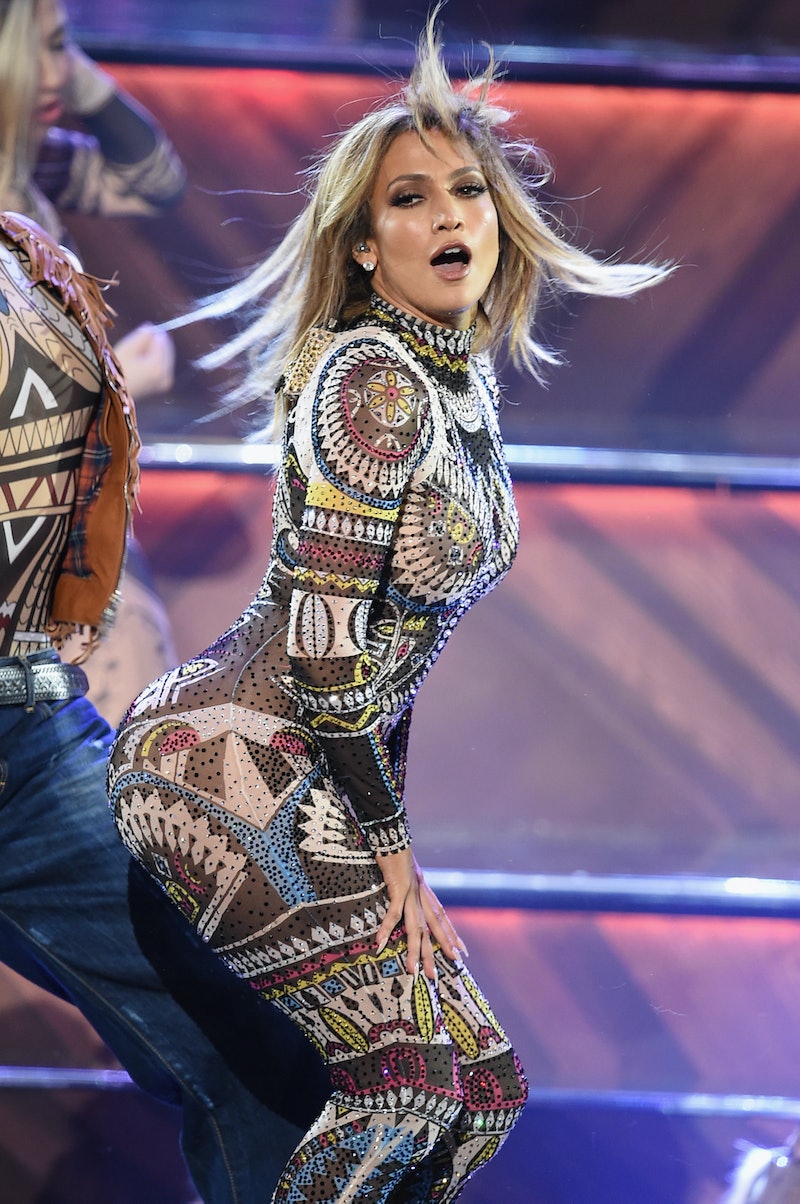 Beyoncé dominated the stage in 2013, Bruno Mars gave viewers ALL the feels in 2014, and Katy Perry made the audience ROAR in 2015... But is it finally time for Jennifer Lopez to perform at the Superbowl? Well, let's just say that J. Lo fans' hopes have just been raised. A video showing the 2016 Superbowl trophy and some background noise of the one-and-only Jenny from the block overlaying has been tweeted, though it has since been deleted. Thankfully, BuzzFeed senior entertainment editor Jarett Weiselman was able to share the hopeful news that has set the Internet ablaze with hope. Update: Weiselman has since deleted his own tweet.

Fans are — rightfully so — freaking out over this Half-Time Show performer possibility. Because, honestly, who doesn't love the idea of J. Lo shaking her thing for us during this year's half-time? After proving herself when hosting this year's American Music Awards just last week, it's easy to see how the NFL might see her as a possible frontrunner. Because she KILLED. IT. Her opening dance number put even Nicki Minaj to shame with her own song — and, hang on, can she perform with Nicki Minaj at the Half-Time Show? Is anyone up there listening? Because that would be amazing.

As if that's not enough to make everyone excited about the possibility of seeing J. Lo in the break between football, even just one of the fan reactions will probably get you hyped by association.

Does the deletion of the original tweet mean that we're all jumping the gun here? Or is the cat really out of the bag, and J. Lo is what we should be looking forward to for the Super Bowl? While the public waits for the answers for these questions, now's a good time to go through J. Lo's entire discography and get yourself pumped for this potential bright future.

More like this
'Breaking Bad' Duo Walt & Jesse Are Back — In This Super Bowl Commercial
By Jake Viswanath
Jennifer Coolidge Recites “Jenny From The Block” Beside J.Lo In Her First TikTok
By Jake Viswanath
David Beckham’s Controversial Qatar Deal Skyrocketed His Net Worth
By Catharina Cheung
Kim K, Oprah, & Jennifer Lopez Celebrated 25 Years Of Anastasia Beverly Hills
By Olivia Rose Rushing
Get Even More From Bustle — Sign Up For The Newsletter
From hair trends to relationship advice, our daily newsletter has everything you need to sound like a person who’s on TikTok, even if you aren’t.