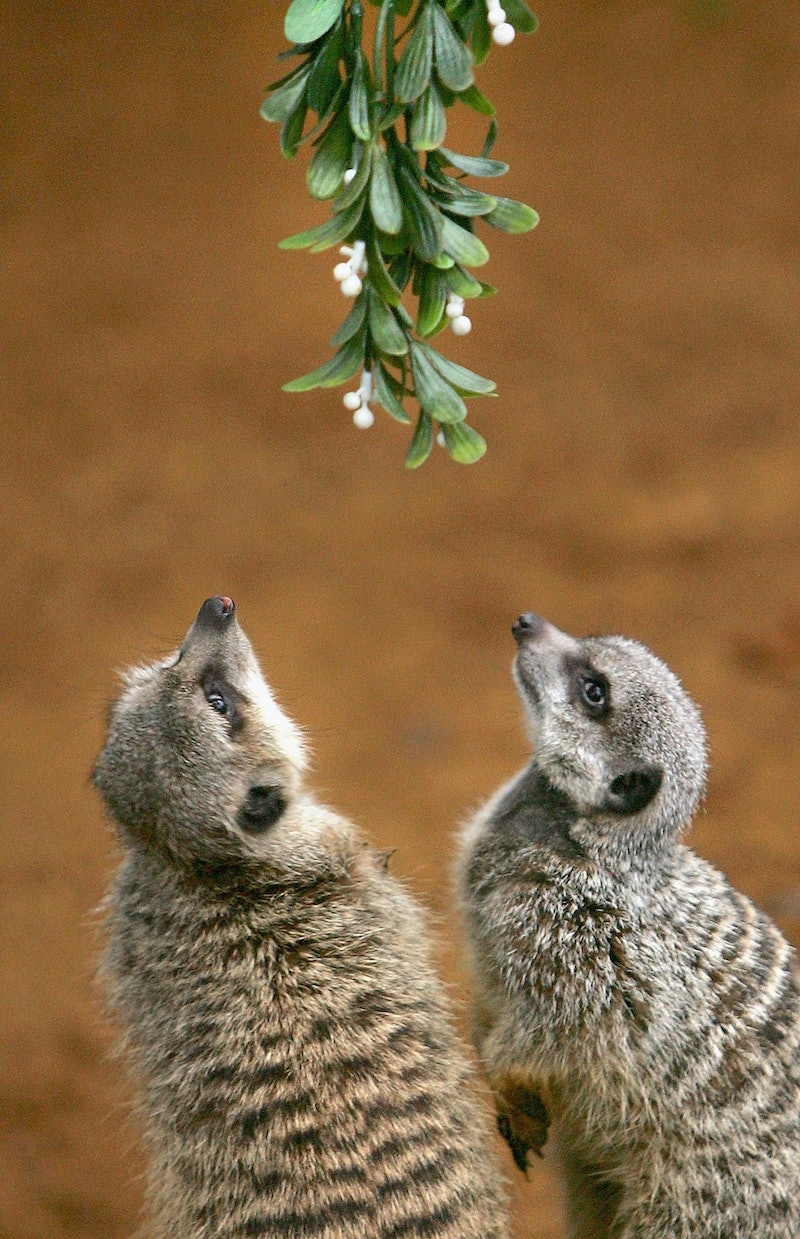 Just like pine trees and poinsettias, mistletoe has long been associated with the Christmas holidays. It’s mostly hung over door frames in order to try and force two people (who might not even be together) to kiss underneath — but as these weird mistletoe facts prove, that’s not even the strangest thing about this festive plant.

Growing up, we had a slew of oak trees on the expanse of property behind our house that hosted mistletoe every year. And my mom, always thinking of ways to encourage my sister and I to be financially independent, suggested that we harvest the mistletoe, wrap little bows around the bundles, and sell them for a few bucks at her office. Kelley Girls' Mistletoe was always a hit every year — my mom’s elderly clients really dug it, especially if we showed our rosy cheeked faces around the place — and we always ended up with a bit of cash to buy presents for our friends.

But man, if I knew then what I know now, my feminist heart would break that I perpetuated such a sexiest tradition. Not to mention, mistletoe is just kind of weird all around. From its poisonous nature to its superstitious past, this plant might be the oddest holiday staple ever.

1. Mistletoe isn’t something you want in your backyard.

As festive as mistletoe might seem, you should be bummed if you find some in your flora. Mistletoe is actually a parasitic organism that steals water and nutrients from its host plant before eventually killing it. Unfortunately, it’s also a pretty resilient little cancer, especially if you leave it long enough for its seeds to spread. The best method for removal is to cut off the entire tree branch or plant stock you found it on.

2. It can be used as an effective poison.

Yeah, you read that right. The thing you’ve been hanging from your eves every holiday season can actually poison you if ingested. Mistletoe isn’t known to kill humans, but it can cause drowsiness, blurred vision, vomiting, and even seizures. It’s also poisonous to animals, so make sure your cats and dogs don’t get a hold of any leaves or berries either.

As I mentioned, mistletoe acts a bit like cancer as it spreads through a plant’s cells — and it’s been used to treat cancer in humans for years. The use of mistletoe as an alternative cancer therapy is mostly used in the UK and in Europe, and it’s not an FDA-approved method in the United States. Despite some harmful side effects, injections of mistletoe have been shown to kill cancer cells in a laboratory setting, and help to decrease the after effects of standard cancer treatments.

4. Mistletoe doesn’t have a scent.

I’m sure we’ve all seen candles, soaps, mists, and air fresheners around the holidays that boast a mistletoe smell. But in reality, mistletoe doesn’t really smell like anything.

5. It was once used to ward off witches.

Have you ever wondered why we hang mistletoe over doorways around Christmas time — besides the weird/gross tradition of forcing two people to kiss underneath it? Well, in medieval times, mistletoe was hung year-round to keep witches and ghosts from entering the house. Actually, mistletoe has a storied history, particularly with the Druid and Norse peoples, and was thought to ward off everything from infertility to fires.

6. It plays a huge role in Norse mythology.

Speaking of storied history, one of the most prominent stories surrounding mistletoe is the Norse story of Balder. Balder was the son of Odin and Frigg, and, like any mother, Frigg worried about her son getting hurt. They cataloged all the things in the nine realms that could possibly bring him harm, and Frigg convinced them all to leave him be, which made him virtually invulnerable. But the trickster god Loki got Balder's mother to admit that the one thing she hadn't asked was — you guessed it — mistletoe, because it seemed so small and insignificant. One thing led to another, and Loki threw the mistletoe at Balder, who died instantly.

7. Mistletoe actually has a bunch of different names.

There are more than a thousand different types of mistletoe, and the plants grow all over the world in a variety of climates, including the desert. So, needless to say, mistletoe isn’t the only thing it’s been called over the years. It also goes by birdlime, all-heal, golden bough, drudenfuss, iscador, and (the super weird) devil's fugue.

8. The translation of "mistletoe" is kind of gross.

Since most people associate mistletoe with kissing and festive holiday gatherings, you probably don't want to know the etymology of the plant's name. The original name was "mistaltan," where "mistal" comes from the Anglo-Saxon word for "dung," and "tan" means "twig." Basically, mistletoe means "dung on a twig." But, you know, keep making out under it or whatever.

Looking for awesome holiday ideas? Check out Bustle on YouTube.