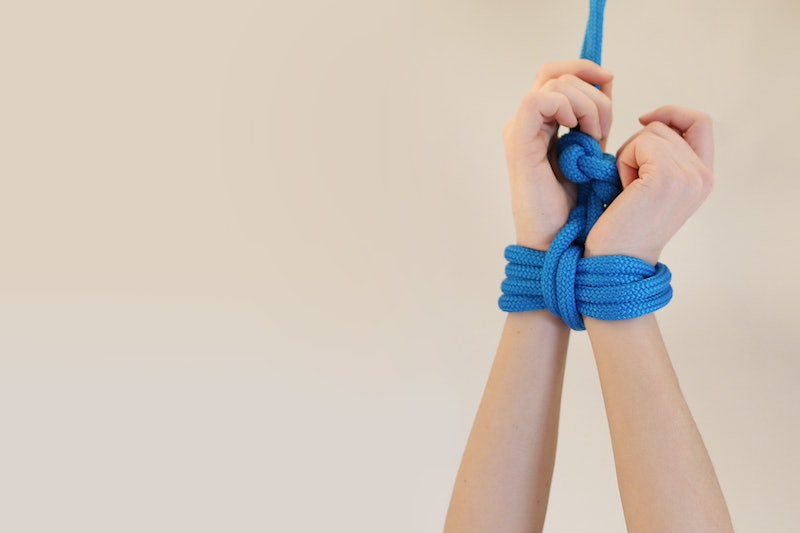 Unless you know where you’re going, Paddles isn’t easy to find — it’s behind an unmarked metal door beneath a Veterinary Clinic sign. I walked down a long concrete hallway with our group, then down stairs into a basement. It was creepy, dark, and musty. Maybe this wasn’t such a good idea? At a window we gave our names, read a list of rules, signed our names, and had our hands stamped. The rules: No alcohol allowed, you may watch a scene but not interrupt, nudity is permitted but no sex, and no touching unless given permission.

Inside, we passed a small room where you can borrow a toy — a flogger or paddle, for example — in exchange for your driver’s license. There was a bar for soft drinks or water. The walls were made to look and feel like the stone of a castle dungeon and the lighting was dark. The club was sectioned off, but the rooms were open, aside from the private "Pandora" room.

A tour of Paddles revealed various pieces of Medieval-like furniture with straps or rigging for bondage. A bed with ankle and wrist straps that looked like a rack from the Spanish Inquisition, a split-seat chair with arm restraints, a spanking bench, a jail cell for…well, use your imagination. Cupboards contained cleaning materials and paper towels for wiping down furniture after use, just like at the gym. Other rooms contained St. Andrew’s Crosses, padded tables, and hooks in the walls, floors, and ceilings.

Confidentiality is highly respected at Paddles. I discovered this firsthand while watching a Dom wrap his naked submissive in blue cellophane. After he completed his elaborate bondage, he used straps and a pulley system to suspend her off the ground. I’m sure he had to take extra care that the cellophane wasn’t overheating her or cutting off circulation. When the Dom finished, he stood back to admire his work. Dungeon masters walked around the club making sure the rules were being followed and safety practices upheld. While I was watching the cellophane scene, a dungeon master approached me and asked if I would step back. I wondered what I had done wrong, but realized the master was warning me because the Dom was about to take a photo and my image was reflected in a mirror — he was protecting my identity.

Beyond the open area lies Pandora, a set of rooms that can be used for private scenes. People who don’t like to have an audience or don’t want to be recognized may use this area and come in through a separate outside entrance. These rooms have a variety of themes. There’s a medical examining room detailed with stainless steel walls, florescent lighting, trays of instruments, and IV stands; a dress up room with a variety of costume choices; an old fashioned school room with teacher’s desk, child’s desk, blackboard, a computer, and a webcam; a wrestling room with padded mats; a Chinese-themed room with a throne, pillars, and pillows; a dungeon with a large wooden wheel where someone could be strapped in and spun around.

I decided I was not going to leave Paddles without participating in my own BDSM scene, and our instructor offered to tie me to a chair for a while. It was a simple demonstration — I was bound long enough to cycle through a sense of struggle, acceptance, and surrender — that gave me an introduction into the "power exchange", which is when the physical/mental control of the submissive party is surrendered to the dominant party. I also wanted to find out what being flogged felt like, and to learn how to swing a flogger properly without injuring my partner. After trading my driver’s license for a flogger, I went to a loft area for my training. Another instructor from our workshop, a Domme and a sadist, gave the lesson. She was very skilled and kept checking to make sure I was okay. Of course I had a safe word, Red, to call out if I needed to stop, but I must’ve been distracted by scenes happening below me, because after I got back to the hotel that night I had bruises on my shoulders. Yes, it stung, but it also felt like a vigorous massage. Worried that my husband would be upset about the bruises, I sent him a text. He was at home. “I learned about flogging tonight. Don’t be worried about the bruises.” He texted back, “Why should I be worried?” Supportive husbands are the best.

More like this
69 Great Gifts For Guys No Matter What Their Hobbies Are
By Teresa Newsome, Mia Mercado and Brittany Leitner
TikTok Is Obsessed With Dolly Parton’s Houseware Line
By Alexis Morillo
14 Underrated Date Ideas To Try With Your Partner
By Lexi Inks
Bumble's "Compliments" Feature Lets You Message Before You Match
By Lexi Inks
Get Even More From Bustle — Sign Up For The Newsletter