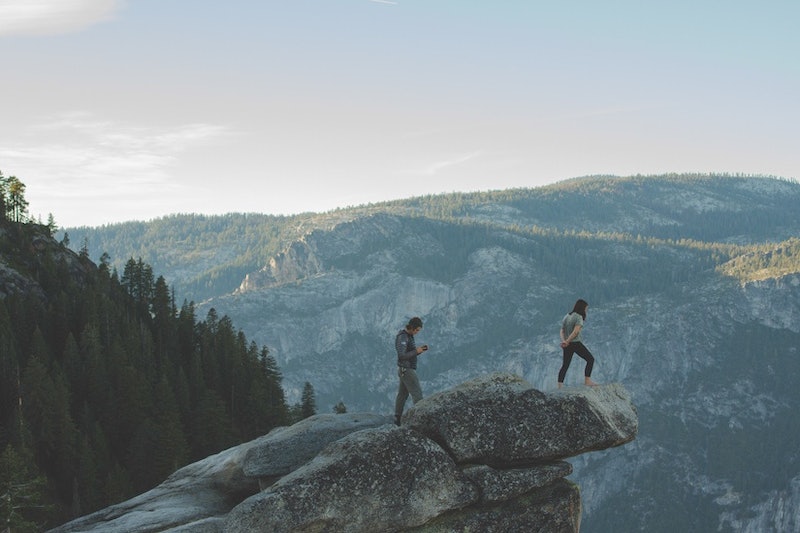 Tension is a sticky thing. Becoming comfortable with confrontation is even stickier. If you're even a sliver of a people-pleaser you'll find that more times than not you'll bite your tongue when something rubs you the wrong way in order to keep the air clear of frayed nerves and inner rants. Whether it's a friend acting controlling while on a trip to a new city, a co-worker steamrolling you during an office meeting, a mechanic ripping you off because it's your first flat tire, or a pal snubbing you during happy hour, your initial reaction might be to bite your lip and sit quite. Granted, you might be thinking of some choice, creative words to stuff down their throats at that moment, but the biggest hint you'll give them to your feelings is your tightly grasped hands.

And while that might help you avoid going into a round or two, you know that in the long run you're not doing yourself any favors. You're letting yourself be taken advantage of, you're building a reputation for yourself as a pushover, and you're not establishing your worth. It might sound like some tough love, but take it from me, one of the most timid people you'll meet. I break out into stress sweats just thinking of calling someone out — but if I ever want to get this adult thing down pat, I'm going to have to take care of my own. And you will too, so to help us in that department here are seven tips on how to get comfortable with confrontation.

1. Realize That Complaining Isn't Getting You Anywhere

We all have moments where we let something bogus slide and then immediately call up our best friend to vent until the steam comes blowing out of our ears. True that it's not worth calling out every slight against you, but if you find yourself complaining about something over and over again and not doing anything to change it... well, at that point you're officially part of the problem, too.

Lifestyle writer Marti Shodt from Hello Giggles said, "Stand up or shut up: The wording is a wee bit harsh, but this little mantra is one my dad taught me and it’s come in very handy. The theory is simple: stop complaining and do something about it." If something bugs you enough to bring it up over and over again during wine sessions with friends, it's time to do something about it. Courage, friend!

2. Realize That Your Silence Isn't Fair To Others

This'll appeal to all of our passive, people-pleaser sensibilities: By not speaking up, you're actually hurting others. You're not letting your friend know they're hurting your relationship, you're not letting a co-worker know they could improve on a skill, and you're not teaching the jerk in question that they won't be able to steamroll every person they meet just because they can.

According to lifestyle writer Kristin Wong at LifeHacker, "I realized that not only is my indirectness unfair to me, it’s unfair to other people, too. This realization appealed to my natural obliger. When I don’t ask questions, I fail at my job, and that’s not good for my boss. When I bottle up an issue with a friend, I become angry, resentful, and passive-aggressive, and that’s not fair to my friend." If you can't speak up for yourself, speak up for the people involved; you're not doing anyone any favors by staying timid.

While all of this might be sounding like solid advice, if you're naturally passive you can't be expected to charge into a room now with guns a-blazing. It's just not going to happen, no matter how many tips you have. So instead, start small. Start off with asking questions.

Wong said, "When I realized it was time to be more assertive, I started small. I started with questions...Once I realized this fear was unfounded, it was a lot easier to keep speaking up. But I had to get over that initial fear. The momentum from that small step — asking a question — helped tremendously."

Ask a question that'll get the confrontation started, something like "Do you think that's fair?" or "What made you say that?" You're not head-butting them in the stomach like you'd like, but you're not sitting on your hands, either.

4. Plan Out Your Battle Strategy

If you have a hard time with confrontation, take a moment to think of exactly what you'd like to say first. Try not to make it about emotions, but rather keep it rooted in facts and what part was inappropriate.

According to Sarah Mitus, social media specialist and career writer at career-development site Levo, "Be able to succinctly address the issue that’s bothering you. Try to make this less about emotion (unless the issue truly is about emotion) to make the conversation most constructive." For example, if you were supposed to head a meeting and got steamrolled, tell your project manager not that you're upset over it, but that you were denied the chance to share your work and expertise. That'll be your spring board toward fixing the issue.

5. Have A Solution Ready To Ease The Awkwardness

Before you open your mouth, decide what you're hoping to gain and then have a solution ready on how you'll gain it.

Mitus suggested, "Be constructive. Don’t just state the issue, but also state the requested solution. For example, asking to have the floor for a few minutes during the next brainstorming session could be sufficient, or maybe you would ask to review the strategy presentation before it goes to the final viewer." You might have gotten slighted, but there's always a way to remedy it. Offer it up.

6. Turn It Into A Conversation, Not A Confrontation

If you cringe at the very idea of confrontation, don't see it as an argument but a normal conversation. Change the narrative from something negative to something neutral. Wong offered, "Simply approaching a conversation in a certain way can make a big difference in the tone. We’ve talked about how it’s better to approach a negotiation as joint-problem solving; this works in the same way. Instead of being combative, you’re working on a solution with the other person." Think of a confrontation as a project the two of you have to work on, not something that you have to smear on battle paint for. It'll help make it feel less intimidating.

If you really hate telling people they're wrong and calling them out, negate that part all together. Combine their point of view with yours, and that way you still get your point across and open up the floor to correct what went wrong.

According to Liane Davey, Ph.D at Psychology Today, "Express your contrary opinion as an 'and.' It’s not necessary for someone else to be wrong for you to be right. 'I hear that you think we need to leave room in the budget for a customer event and I’m concerned that we need that money for employee training. What are our options?'" In this way, you're still confronting them but you're not necessarily charging at them, which makes it a lot less awkward.

If you keep these tips in mind next time something goes awry, you can take the first step towards a more assertive, I-don't-think-so-mister you!