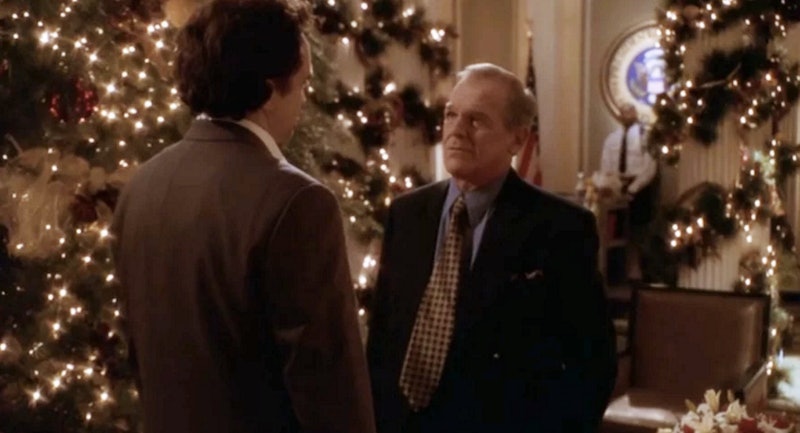 If you don't have anything to do this holiday season, I have a suggestion for you: watch all the Christmas episodes of The West Wing. Oh man, you didn't think I was going to invite you over to my house, did you? Ooh, that's super awkward, but my place is really small. We should probably just go to the White House instead, because I know they have the extra space. And no, not the real White House; the White House in our minds, from The West Wing. Get it?

In addition to being one of the best shows that's ever graced our television screens, and giving us some of the kindest, smartest, most amazing characters on the face of the planet, The West Wing also has some pretty baller Christmas episodes. Perfect for spending the holiday with your favorite fictional people when your favorite flesh and blood people are out of town or ignoring your calls. But, seriously, you guys, this show was on for seven seasons and apparently only skipped a Christmas episode one of those years, so they've racked up six tasty politico-holiday treats for you.

Dive into all six in one sitting — they're on Netflix, and what else is Netflix for? — or use this handy guide to figure out which of these classic episodes is the reason for your season.

Ah, back in the days of sweet innocence early on, where we could still drum up drama by having President Bartlet sneak off to do some Christmas shopping solo. But the other elements of the episode are dramatic enough to make up for it. For example, Toby Ziegler takes responsibility for a homeless veteran who died on a park bench near the Korean War Memorial wearing a coat that Toby had donated to Goodwill with one of his business cards still in the pocket, and we find out why Mrs. Landingham doesn't celebrate Christmas — because her twin sons died in Vietnam on Christmas Eve. Woof.

This is when Josh Lyman is still shaken up (an understatement; he's suffering from PTSD) after the attacks on the President's life, and he's completely erratic, with everything setting him off — particularly music. It's a really nontraditional Christmas episode, with depth and fear instead of holiday fluff, and, for that reason, I really can't recommend it enough. Assuming you see it in context with the other episodes from this season, of course. Without them, it won't make any sense.

I know these aren't great adjectives so far, but these episodes are all so. solid. At the center of this season's Christmas episode is President Bartlet's failure to disclose to the American people that he's suffering from MS, and the fallout from that. But, in order to understand why his team members, particularly Leo McGarry, are still sticking so close to him, we see some really beautiful and illuminating flashbacks into their history together. The vibe is anxiety-inducing, because we don't know how things will end up, but ultimately heartwarming in the face of all this support and friendship.

Usually, when Danny Concannon comes around, it's a real good time, but not this Christmas. He has some pretty important questions about Abdul ibn Shareef's plane, which the administration maintains went down on its own, but was actually an assassination. Toby's also having a helluva holiday, dealing not just with his own father, who's in town due to some machinations on Josh's part, but depositions over his ex-wife Andy Wyatt's pregnancy. Oh, and we also meet Zoey Bartlet's new boyfriend Jean-Paul, of whom we should all have been suspicious from the beginning.

There are some more intense storylines, like debate over the right-to-die law in Oregon, and a hostage crisis in Sudan, but the most accessible one for your Christmas needs is about family being aggravating. President Bartlet's son-in-law Doug Westin wants to run for Congress, presumably with the President's blessing, and, oh boy, does he not wanna take no for an answer. Just like your family!

President Bartlet almost entirely paralyzed in China as a symptom of his MS? An asteroid bearing down on Earth? Donna Moss quitting her job and leaving Josh gaping like a fish that she finally worked up the nerve? Sounds like a recipe for Christmas to me!

So, in retrospect, these are not your average Christmas episodes, but I just love them so much that I'm going to be celebrating with them anyway. Call me crazy, but I just can't get enough.