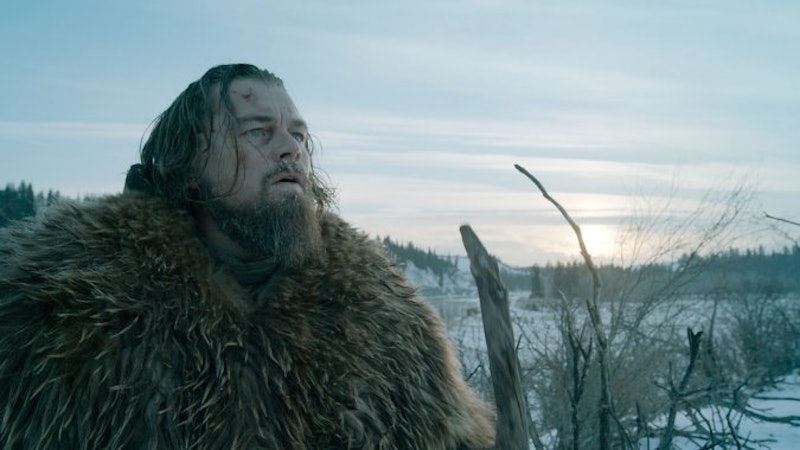 It's a rumor that just sounds too preposterous to be true: "Leonardo DiCaprio is raped by a bear in his new film The Revenant." But it led to a very real response from the movie's production company, 20th Century Fox. “As anyone who has seen the movie can attest, the bear in the film is a female who attacks Hugh Glass because she feels he might be threatening her cubs,” a Fox spokesperson told Entertainment Weekly. “There is clearly no rape scene with a bear.” The rumor started when the Drudge Report wrote that the film, which stars DiCaprio as the 1800s frontiersman Hugh Glass, “features a shocking scene of a wild bear raping Leo DiCaprio.” Twitter had fun making "unbearable" jokes about the falsely reported sexual assault, some about the sexual act itself. One person even writing that was one "lucky bear." If someone, especially a man, was to laugh at the idea of anyone or anything raping a woman, we would be going after them with pitchforks (and rightfully so). So, why aren't we having the same serious reaction to the idea of male rape?

This showdown between Glass and the bear has been featured in nearly every trailer for the movie, and it clearly shows the bear attacking the actor and nothing more. However, Drudge's exclamation point-fueled take of the scene announced, "The bear flips Leo over and thrusts and thrusts during the explicit mauling. He is raped twice!" The NSFW headline, featuring the words "rape" and "Leonardo DiCaprio," was too tough for many publications to ignore and even harder for others to resist making a joke about. However, we shouldn't just treat it as fun and games at the expense of those who have actually been raped — especially male rape victims, who don't always get the respect female victims do.

Sure, those making jokes about Leonardo DiCaprio and the bear might be laughing at this idea of an animal performing such a heinous act. Others are just having fun with the ridiculous lengths some may go to get a few clicks. But the jokes ignore the reality of how pervasive and insidious a problem male rape is in the United States, and, despite the fact that the rumor has been shut down, the situation should be taken as the perfect time to actually get a serious dialogue going.

According to the Rape, Abuse & Incest National Network (RAINN), about 3 percent of American men have experienced an attempted or completed rape in their lifetime. That's one in 33 men. In the U.S., 2.78 million men have been victims of sexual assault or rape. RAINN also reports that from 1995 to 2010, nine percent of rape and sexual assault victims were male — and that's just what has been reported. As Time pointed out, studies like the Center of Disease Control statistics in a 2011 National Intimate Partner and Sexual Violence Survey don't account for all types of sexual assault, specifically when it comes to male victims.

A 2014 Slate piece talked about the changing numbers when it comes to male sexual assault victims, citing the data revealed by the Bureau of Justice's National Crime Victimization Survey, which found that, out of 40,000 U.S. households surveyed about rape and sexual violence, 38 percent of incidents reported were against men. These acts of violence were often perpetrated by women. This survey, unlike the CDC's, also took into account those acts of violence that happen in prison, which are not counted in the general national statistics. When considering those who were "made to penetrate," the rates of nonconsensual sexual contact were nearly the same, with "1.270 million women and 1.267 million men claiming to be victims of sexual violence."

The Slate piece tries to get at the problem we have defining rape, specifically when it comes to men. The magazine urges us to expand the meaning of rape, and get rid of the term "made to penetrate," so that it does not only mean someone who is forcibly penetrated, but someone is forced to penetrate someone else. Criminologists Richard Felson and Patrick Cundiff found in a study called "Sexual Assault as a Crime Against Young People" that "a 15-year-old male is considerably more likely to be sexually assaulted than a woman over 40," but, often, it is simply considered molestation, not rape. Using the "made to penetrate" definition of sexual assault, the CDC reported that 12.3 percent of female victims were 10 or younger at the time of their first completed rape victimization while that number is 27.8 percent for male victims. But how many more could there really be if we decided to call it rape instead of something less dire?

Male rape victims have become the silent minority in the discussion of sexual assault, but these often forgotten male victims deal with the same effects that female victims do: they experience an increase in depression, are more likely to suffer from post-traumatic stress disorder, are more likely to abuse drugs and alcohol, and are more likely to contemplate suicide. Every sexual assault victim's experience should be taken seriously. Rape is a gender-neutral issue that effects both men and women, and that people of both sexes need to treat with the seriousness such a discussion deserves. If there's anything good to come out of this drudgery about Leo and the bear, it is that it will get people talking — not just making jokes on Twitter.