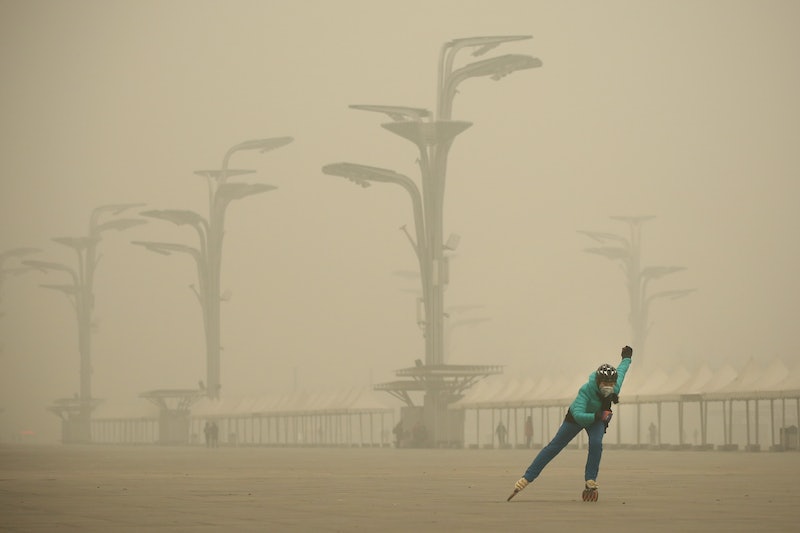 In case any world leader was not convinced of the need for the United Nations Climate Change Conference (COP21) happening in Paris right now, then they need to look at what's been happening in China. In the past few days, just as the COP21 kicked off, China has recorded its highest levels of smog so far this year, prompting Beijing to raise its air pollution alert to orange, the second-highest level. On Tuesday, as Chinese President Xi Jinping met with other world leaders at the COP21, authorities throughout China closed down schools and advised people to stay inside. Just one look at photos of China's current smog situation is enough to convince anyone that a universal agreement on climate change is necessary and urgent.

As China enters into the winter season, which began this year with an exceptionally cold November, more coal is being burned to generate heat and power. As a result, the number of airborne particles in the atmosphere has surged, forming a thick cloud of smog over several cities. On Monday in Beijing, the level of PM2.5 (a measure of air pollution) reached 900 micrograms per cubic meter. To give you a sense of how hazardous that is, the World Health Organization's standard for healthy air is 25 micrograms per cubic meter. That's a staggering 36 times the amount of particulate matter in the air that's advised for breathing.

To give you an even more eye-opening idea of the severity China's the air pollution, Chinese artist and activist Nut Brother has been vacuuming the particles in the air and transforming them into dense smog bricks in order to raise awareness. Yes, that is how many pollutant particles are in the air that people in China are breathing into their lungs right now.

As China faces its most recent "airpocalypse," President Xi spoke at COP21 and vowed to work together with the U.S. to combat the increasingly dire climate issues. He told the crowd (through a translator):

The world economy is recovering slowly, terrorism is on the rise and climate change is a huge challenge. There is more instability and uncertainty in (the) international situation.... [It is] very important for China and the United States to be firmly committed to the right direction of building a new model of major country relations ... partnering with each other to help the climate conference deliver its expected targets.

And the man couldn't have timed his speech better with what's currently happening in his own country. If he wanted to, President Xi could have forwent his speech entirely and just showed the following photos of the smog in China to get his point across.