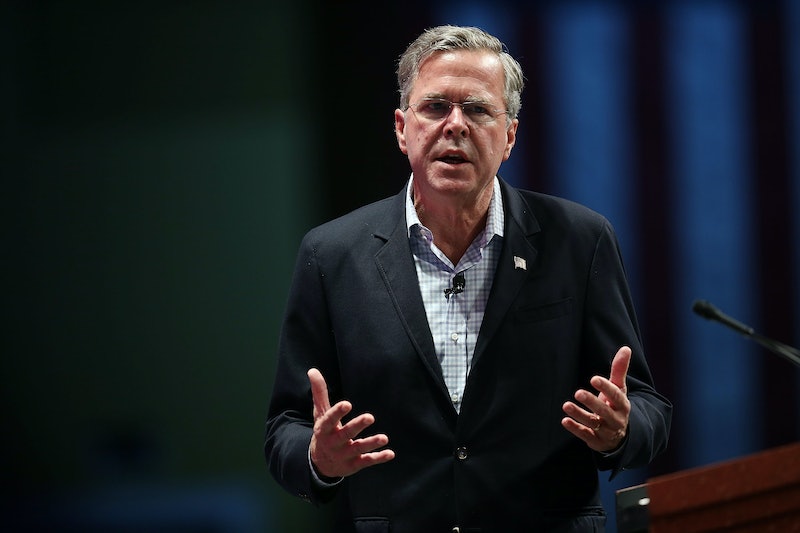 Don't look now, but Jeb! Bush is still fighting his way down the comeback trail. It isn't working, sad to say, as Donald Trump still holds a commanding lead against an overstuffed Republican field, and compared to where the conventional political wisdom pegged Bush at the beginning of the race, he's doing abysmally — he clocks in at just over 5 percent nationally. But nonetheless, there he is: tired eyes, drooping shoulders, still plugging away. And on Tuesday, he floated something rather unexpected: Jeb Bush wants his vice president to be a woman, and there are a handful of credible names on the Republican side he could choose.

If he ever got that far, that is. And let's be honest, it's not looking good, which is why even bringing up the idea of a vice presidential pick is both desperately premature and wildly optimistic. For some context, Bush has already burnt up more than $30 million in campaign cash, by far the biggest number in the GOP field, and he's not even sniffing leads in any of the crucial early primary states.

From that distant vantage point, talking VPs might seem delusional, but it provides at least one benefit: making people envision a reality, even if only for a moment, in which he actually wins this thing. Here are some Republican women he could pick, were something truly dramatic to happen between now and the 2016 Republican National Convention in Cleveland.

If the Republicans were to pick a woman for VP in 2016, Fiorina should be considered the odds-on favorite. She's been running for the top job herself for months, is every bit as confident and polished as any of her rivals, and had turned in some well-received performances, despite her controversial and misleading remarks about Planned Parenthood (likely not a big issue for the Republican base, needless to say).

It's worth noting that she's gotten very little traction, however. Despite a little bump following her first debate, her national polling figures are now even worse than Bush's, at just over 3 percent. But she's a known name in the GOP presidential race in a way no other woman is, and it's not as though VP picks need to be presidential contenders in their own right — Joe Biden, for example, flamed out horribly in his own 2008 presidential campaign before teaming up with Obama.

The second-term governor of South Carolina, Haley is pretty well-positioned for a national rise to prominence, if only a Republican contender would offer her a spot on the ticket. Although her tenure as South Carolina's governor hasn't been smooth sailing all the way, her numbers have rebounded of late, including stronger than usual support from Democrats (she's at 40 percent approve/42 percent disapprove, according to Public Policy Polling). In sum, she's one of the country's most popular Republican governors, and that's something any top-of-the-ticket candidate could use.

Ayotte, a first-term Republican senator, has nonetheless established herself as a high-profile conservative voice on foreign policy and national defense, and she's already been the subject of speculation as far as being the lower-half of a Republican ticket goes. Both in this election cycle, and the previous one — she was very much in the conversation in 2012, when nominee Mitt Romney was looking for a running mate (he ultimately settled on then-representative and current Speaker of the House Paul Ryan).

Make no mistake, if there's any woman with political experience — unlike Fiorina, for example — that the establishment would like to see get the nod, Ayotte is up there.

If you were trying to pick out strong female vice presidential nominees from the crop of Republican governors a couple of years ago, the name Mary Fallin almost certainly would've been higher on this list — her approval rating has tanked more than 20 points since 2013, amid persistent criticism of her resistance to Medicaid expansion (although plenty of GOP voters might not complain about this, thanks to its relationship to the Affordable Care Act), and more recently, her stewardship of the state's death penalty process.

She also doesn't add as much value to a Republican ticket as somebody from a more liberal state might — suffice to say, Oklahoma's not going blue next year no matter who's running. But nonetheless, Fallin could very well get a look once the VP decisions are finally being made.