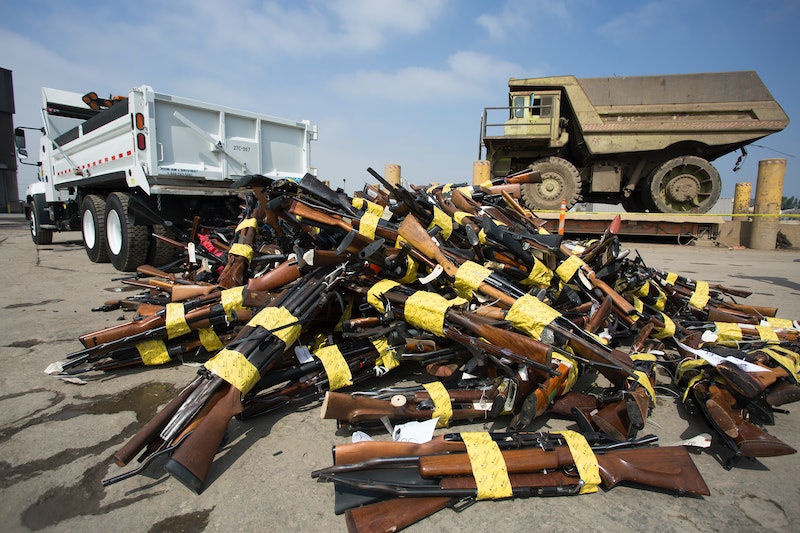 Earlier: On Wednesday morning, just hours after the University of North Carolina Chapel Hill campus lifted a lockdown warning, an active shooter situation developed across the country at a service center for developmentally disabled people in San Bernardino, California. As many as 20 victims were initially reported "down," with three alleged suspects reported to be wearing body armor. As of Wednesday afternoon, SBPD Chief Jarrod Burguan says that "upwards of 14 people ... are dead [and] upwards of 14 people that are injured." Multiple law enforcement agencies promptly responded and began issuing updates on Twitter, while the country yet again braced itself for another horrific shooting and its aftermath. 2015 has seen over 350 mass shootings so far.

That the shooting took place in California is particularly remarkable, given that it has the most restrictive gun laws in the United States, thanks to a highly progressive legislature. Anyone who wishes to purchase a gun in California must produce a Firearm Safety Certificate, and must purchase a "California legal" gun which complies with stringent mandates on what can and cannot be sold within state borders. Sales include a waiting period, and must be conducted through a licensed dealer, and the state constitution doesn't guarantee firearms rights, though federal suits are pending against the state on the grounds that some of its laws may violate the Second Amendment.

Some look to California as a model for possible reforms to gun control. But as the San Bernardino shooting — and the more than 20 other shootings in the state listed by the Mass Shooting Tracker — illustrates, even those laws aren't enough. This shouldn't come as a particular surprise, because while California law may seem extremely strict to some, it's highly loose when compared with gun control laws in other nations, like New Zealand, Japan, and Britain. In such places, gun ownership is so tightly controlled that in many cases, it is functionally impossible to legally own a firearm.

Conservatives are already leaping on California's gun laws as evidence that even "strict gun control" doesn't work, but they're missing the larger and critical picture here: The state's gun control isn't terribly strict on a global scale — only nationally.

The failure of California's gun control in this case — and the nation's more broadly — can be attributed to one thing: the gun lobby, and its concerted and highly effective attempts at fighting any potential limitation on the sale of firearms and associated paraphernalia, often with the direct assistance of some of the most powerful politicians in America. The United States has always been a nation of the gun, with an identity deeply bound to gun ownership in many regions of the country. The lack of ability to distinguish between the public interest and private freedom has long been a problem for social reforms in general, and gun control in particular.

In a country founded on individual liberties, one where personal freedom is highly prized, the thought of legislation which hinders private ownership of firearms is deeply terrifying to some. The gun lobby exploits such fears as it viciously fights any attempt to limit gun ownership. Whether it's funding political campaigns or taking advantage of special legal protections, it's dominated the conversation on the subject. With mass shootings coming so fast and thick that a day doesn't pass without one, gun lobbyists insist that people not "politicize tragedy." But it's impossible not to; the United States is in a state of perpetual tragedy and eternal gun crisis, and it will be until the issue of its unconscionably lax gun laws is resolved. (The NRA has yet to comment on this most recent shooting.)

As Americans insist on keeping refugees on the other side of our borders, we ignore the crisis of violence that makes it unsafe to go to the movies, attend a political rally, participate in K-12 education, be present on a college campus, work in or need services from an abortion clinic, or (in this case) access social services. Simply being outside, let alone accessing public accommodations, is becoming a dangerous proposition in the United States, and the gun lobby resolutely refuses to take responsibility for this.

Conservatives are already leaping on California's gun laws as evidence that even "strict gun control" doesn't work, but they're missing the larger and critical picture here: The state's gun control isn't terribly strict on a global scale — only nationally.

When compared to other states, California is performing better than others when it comes to mass shootings per capita, but that isn't much of an accomplishment. While conservatives and liberals alike can agree that California's gun control wasn't adequate to prevent the shooting in San Bernardino, they differ on why. The problem isn't that the laws were too strict, and that shooters would acquire guns by any means possible and thus that we should give up on gun control altogether. It's that the laws are patently not strict enough.

We don't yet know enough about the shootings in San Bernardino to determine all the factors involved — how many shooters there actually were, which weapons were used, whether those weapons were legally acquired. What we do know is that in a state known for tough gun laws passed over considerable complaint from the gun lobby, people still manage to acquire weapons for use against civilians.

President Obama stated in response to the Planned Parenthood shooting that occurred last week that:

This is not normal. We can’t let it become normal. If we truly care about this — if we’re going to offer up our thoughts and prayers again, for God knows how many times, with a truly clean conscience — then we have to do something about the easy accessibility of weapons of war on our streets to people who have no business wielding them. Period. Enough is enough.

He wasn't wrong. This shouldn't be normal, and this shouldn't be the face of America, domestically and for the world. But it is. Citizens of most of the West and a fair chunk of the Global South are shocked by how insufficient our gun laws are, and they should be. What private individual needs to own a long gun? A handgun kept anywhere other than a range for recreational shooting? Military-grade equipment? We aren't living in an era in which we need a "well-regulated militia." In fact, the organizations calling themselves "militias" today tend to land on the Southern Poverty Law Center's list of known hate groups on a regular basis. These are precisely the people we don't want carrying guns. Many of them are terrorists disrupting American society and inculcating us with a sense of deep fear of going about our daily business.

We can blame the gun lobby for all of this, and we should keep blaming the gun lobby until Congress cannot avoid this problem any longer. Even though we keep saying this after every mass shooting, it is apparently not enough. We must march on Congress, we must lean on our representatives, and we must vote for candidates who promise to take aggressive stances on gun control. We owe it to our dead, if not to ourselves.