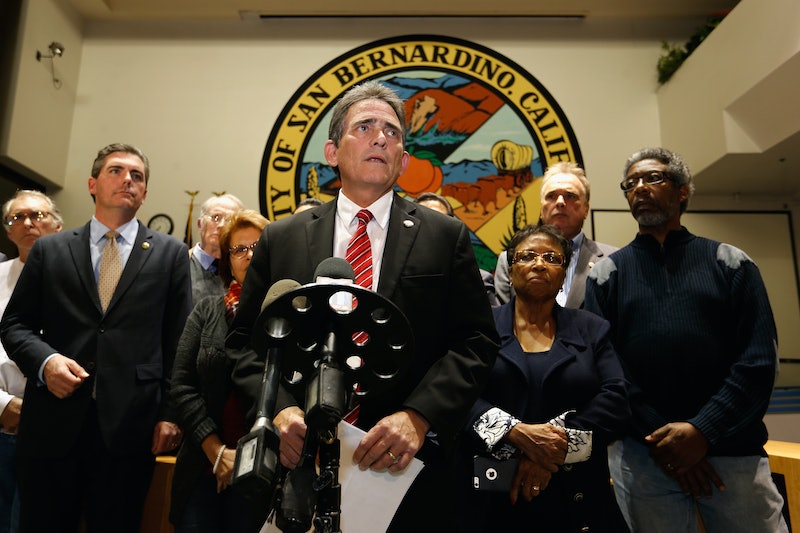 Earlier: Reports began flooding in late Wednesday morning Pacific time of an active shooting in San Bernardino, California, at the Inland Regional Medical Center on South Waterman Avenue. As the financially strapped city begins to cope with this attack, residents will look to the city's leadership. Who is R. Carey Davis, the mayor of San Bernardino, and what can we expect from him in the wake of another mass shooting?

Davis, a Republican and political newcomer, was elected mayor of San Bernardino in 2014 in the wake of the city declaring bankruptcy. Before that, he worked in accounting and financial planning for businesses and non-profits. Davis has yet to issue a statement on this attack, but he has commented on the city's escalating homicide rate, outlining his plan to combat the rising number of annual murders by coming down hard on gangs. Davis outlined a plan, which included "going after illegal marijuana dispensaries and unregulated housing complexes, which he said ferment gang activity," the LA Times reported shortly after Davis' election.

As the situation continued to develop, police were still searching for between one and three active shooters who were heavily armed and reportedly wearing bullet proof vests. A dark-colored SUV was spotted leaving the scene of the shooting. So far, at least 14 people are reported dead, and between 20 and 40 people have been reported injured. A suspicious package may have been found on the second floor of the building and the bomb squad has arrived on the scene, according to local news stations.

The Inland Regional Center provides health services for people with developmental disabilities, among other things. The Center, which employs just under 700 people, has been largely evacuated, according to police.

Early reports that the shooting was related to a nearby Planned Parenthood were proven false, as the women's health clinic issued a statement that they were not, in fact, involved.

More like this
Michigan’s Governor Is “Going To Fight Like Hell” To Protect Abortion Access
By Andrea Zelinski
9 Honestly Unbelievable Revelations From The WAGatha Christie Trial
By Frances Stewart
Don Crowder Successfully Defended Candy Montgomery, But His Story Ended In Tragedy
By Gretchen Smail
UK Viewers Will Have To Wait To See Jessica Biel’s Killer Housewife Series
By Rachel Mantock
Get Even More From Bustle — Sign Up For The Newsletter