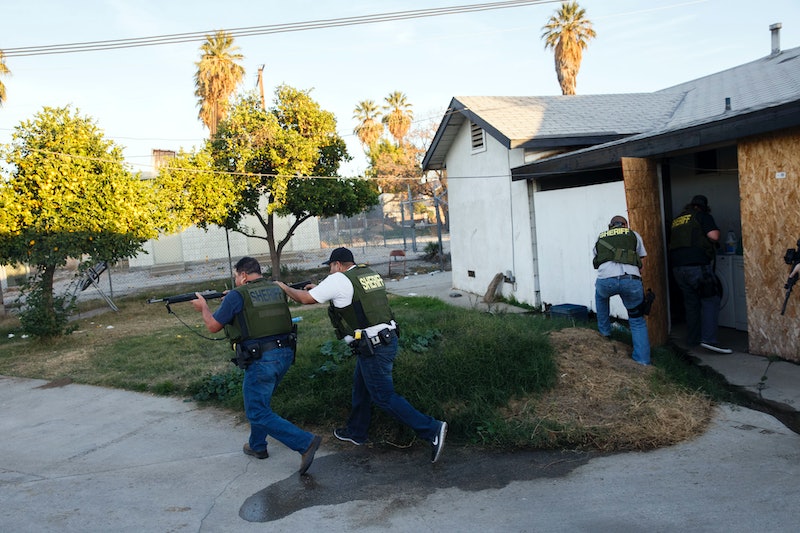 Update: On Wednesday, Dec. 2, a shooting at the Inland Regional Center in San Bernardino, California left 14 people dead and 21 wounded. Hours after the attack, police pursued information that led to a chase of a dark SUV, which was later determined to be a rental car. A shootout between police and the suspects left both suspects dead. They were identified as Syed Farook and Tashfeen Malik, who were husband and wife.

According to SBPD Chief Jarrod Burguan, the four guns used in the shooting were purchased legally. The suspects were found to have 1,600 rounds of ammunition with them, and at a home they were renting in Redlands, California, law enforcement officers found 4,500 rounds of ammunition and 12 pipe bombs. No official motive has been confirmed, though a source told The Los Angeles Times that investigators are considering that it might be terrorism or workplace-related.

Earlier: On Wednesday, multiple shooters opened fire on a center for disabled people in San Bernardino, California. By Wednesday evening, police had confirmed that two suspects — one man and one woman — were killed in a shootout with responding officers. It's still unclear if the female suspect was actually one of the shooters, but if she was, that would make her one of the very few females to carry out a mass shooting.

Men are responsible for 90 percent of all murders and 98 percent of all mass shootings. That's not to say that women aren't involved. Women are sometimes included in mass shooting statistics as perpetrators, but more often than not, that's because they assisted in the shooting without actually pulling the trigger.

There are many plausible theories about why women commit murder and mass shootings less frequently than men. For one, men are more likely to be gun owners than women. According to Pew Research Center, 38 percent of men report owning a gun, whereas just 31 percent of women say the same. Additionally, men are more likely to be fueled by testosterone, which can cause aggression. No one theory could explain the trend on its own, but none of them are particularly surprising.

The prevalence of male mass shooters could also have to do with the ways that men and women each use violence. "Women tend to use violence as a last resort, as a self-defense mechanism," James Alan Fox, a criminologist at Northeastern University, told CNN in July. "Men tend to use violence as an offensive weapon." At the time of Fox's statement, the country was still feeling the effects of another mass shooting: The massacre carried out by Dylann Roof at a church in Charleston, South Carolina.

When women do kill, it's rare that they shoot, or that they kill randomly. According to TIME, women tend to kill "in a more intimate way" than men (think drowning, suffocating, etc.). Men, on the other hand, are more likely to go out of control, shooting at an entire room of strangers. As a result, men tend to kill more people and engage in the behavior required to meet the definition of a mass shooting.

The unidentified woman who was killed by police on Wednesday afternoon could have been directly engaged in the shooting, although her full involvement is unconfirmed and her role is unknown. Still, it's not often that we hear about a female suspect in these all-too-common mass shootings. In fact, it's even sad that we have statistics and research to prove that fewer women commit such violence than men.