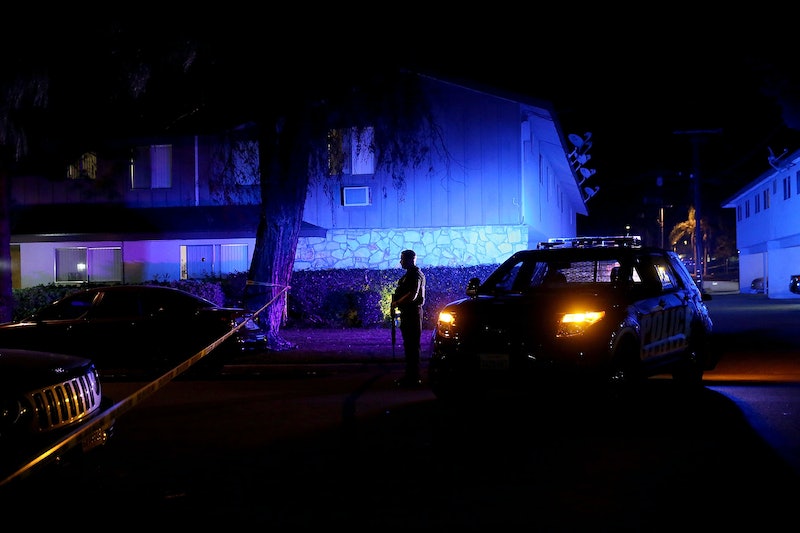 After the two suspects in the San Bernardino mass shooting were identified, it was also revealed that Syed Farook and Tashfeen Malik were a married couple with an infant daughter, according to family members and police. But before meeting and marrying Malik, Farook appeared to be actively searching for love and seemed to have tried multiple online dating sites to find a match. As authorities continue to investigate the case for an official motive, they have undoubtedly gleaned information from Farook's online dating profiles, which offer some revealing details into the personal life of the health inspector turned mass shooting suspect.

As the investigation continues, it's unclear how Farook met Malik exactly, but according to co-workers at the Inland Regional Center, he recently traveled to Saudi Arabia and came back with a new wife that he had met online. Earlier this year, the couple welcomed a baby girl. One colleague described the two as "living the American dream." But before he found his partner, Farook was just like any other single guy trying to find love, and like 40 million Americans, he decided to try the online dating route.

So far, three dating profiles have been discovered that appear to belong to Farook. His profile on imilap.com, an "Indian matrimony and dating" site "for people with disabilities and second marriage," appears to have been created by his parents. He also seems to have profiles on the dating sites Dubaimatrimonial.com and BestMuslim.com. Here are nine revealing details about Farook from his multiple dating profiles.

He Was A Car Enthusiast

Farook's description in his imilap.com profile reads: "I work for county as health, safety and envorimental [sic] inspector." He then lists some interests, such as reading religious books, eating out, traveling, and "working on vintage and modern cars."

Another interest he lists in the section is "just hang out in back yard doing target pratice [sic] with younger sister and friends." So it appears he'd already had experience handling and shooting firearms.

He Was Very Religious

In his profile on BestMuslim.com, Farook noted that he was Muslim and chose "devout" for "practicing level." He added: "I spend much of my free time in the masjid memorizing the Quran and learning more about the religion."

He Was Searching For A Devout Muslim Woman

Under the description of the person he was seeking, Farook wrote:

I am looking for a practicing muslimah, someone who takes her religion very seriously and is always trying to improve her religion and encouraging others to do the same using hikmah and not harshness ... if her imaan is in the right place then the other small things should not pose that much of a problem.

But He Didn't Have A Nationality Preference

In his profile on Dubaimatrimonial.com, Farook chose "Any" for "Acceptable Nationality." On BestMuslim.com, he chose "Any Country" for "Nationality or Root Country."

He Didn't Indulge In Entertainment

On BestMuslim.com, Farook noted that he doesn't "watch much TV or movies."

According to ABC News, one of his dating profiles listed snowboarding as one of his interests.

In his profile on imilap.com, which was reportedly created by his parents, the description reads: "religios [sic] but modern family of 4." Under "Family Values," it reads: "Eastern and Western Mix."

He Described Himself As Liberal

ABC News also reported that in one profile, Farook described his personality as "cautious, reserved, skeptical, and very liberal."