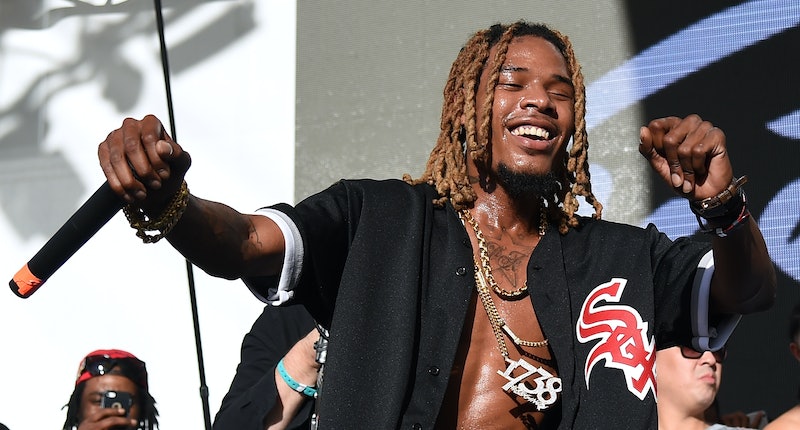 There's a good chance Fetty Wap will have a reason to break out the 1738 on Dec. 7 when the Grammy nominations are announced. It’s almost a certainty that Fetty Wap will lock down at least one 2016 Grammy nomination, and if there's justice in the music world, he'll get one for Best New Artist. The 24-year-old Paterson, New Jersey native burst onto and disrupted the hip-hop scene in 2015, rising to the top of charts with super speed. “Trap Queen” was just a taste, and when Fetty Wap released his full-length self-titled album in September, it was met with showers of praise. If the Grammys snub him, it’s definitely going to hurt their credibility.

If you don’t know much about Fetty beyond that he now owns the otherwise banal phrase “Hey what’s up hello,” get to know him. The young artist is a father of two, loyal to his city and his crew, RemyBoyz, lost his left eye, and most remarkably, didn’t start making music until two years ago. He describes himself as positive and loyal, and that shone through on his single "Trap Queen," a track dedicated to staying true.

Interestingly, "Trap Queen" has gotten attention for its feminist vibe. MC Lyte even went as far as to call Fetty Wap "hip hop's biggest feminist" (which is a bit of a stretch, but his themes are definitely pro-woman). At The White House Council's Women & Girls Summit in November, MC Lyte said of Fetty:

He may have a very unique way of presenting his ideas, but he does love women. He’s being pretty courageous right now with what it is that he presents in his music, because it’s really not the norm... You win the challenge when you’re able to get your message across without degrading your sister, or your woman or your mother.

And did I mention, Fetty Wap made up the lyrics to "Trap Queen" on the spot? When Spin Named him Rookie Of The Year 2015, interviewer Dan Weiss noted that until "about a year ago" the rapper freestyled all his lyrics, and when he asked if Fetty made "Trap Queen" that same way, he answered, "Basically... yeah." Yeah.

If the Grammy Awards want to keep up with the times, it would be foolish not to give Fetty Wap a nomination. He’s already received several honors that point to him being the best new artist of the year. Fetty made history as the first artist whose first four singles all made the Top 10 Billboard Rap Chart. Fuse breaks down Fetty by the numbers in a convenient infographic: He's had more than 318 million Youtube views for his "Trap Queen" video, three top hits this year, and says "yeah baby" more than 40 times on his album (the most important stat here).

Fetty Wap will probably make a strong showing across all the rap categories when the Grammy noms are announced, but hopefully he'll get a nomination for the coveted Best New Artist award. The predictions so far definitely have him among the favorites, but it's a very broad category. Other potential nominees include country artist Chris Stapleton and pop singer Meghan Trainor, whose single "All About That Bass" was everywhere last summer. But really, Fetty is the the only true contender I see. Hey, what's up, hello, Grammys, don't snub Fetty. It's not gonna look good on ya.