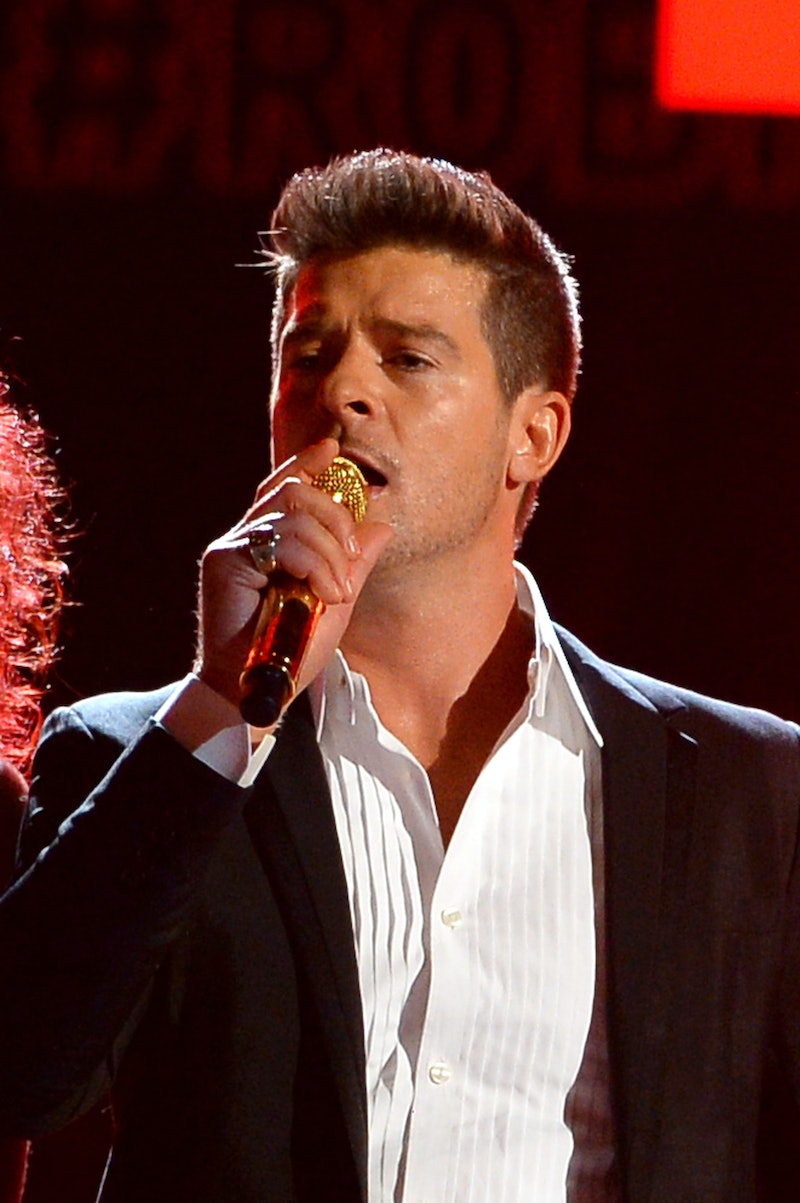 So there are a lot of male singers that want to give it to you/us/women in general. Hell, there have been two songs about giving it to us in the last 15 years alone.

First there was Jordan Knight's '90s-tastic single, "Give It To You":

And now there's Robin Thicke's updated rape-anthem "Give It 2 U":

You might think to yourself, "Ooooh what are they giving us? Flowers? Chocolates? Tickets to see Beyoncé?" Aww, aren't you so sweet and innocent. No, Knight and Thicke want to give us their penises, ladies, and here are the similar ways in which they go about convincing us to take them.

Just because you use the word "give" doesn't necessarily make something a present. I mean, truthfully, "I'm Going 2 Put It In U" just doesn't have the same ring to it, but I'm pretty sure if ever a man tried to pick me up using the phrase "give it to you" to intimate boning, I'd assume he was recruiting me for drug trafficking, not casual sex.

Girls, haven't you heard? Giving obscure "signals" that you want to have sex with someone is pretty much the same as giving consent! When Knight seductively croons, "You don't have to say the words / I'm convinced you want this," we can't help but think: Yeah, Jordan, we actually do have to say the words. Although his dance moves might remind us of New Kids on the Block in all the right ways, pretty much everything else rubs us the wrong way.

"Girl you so damn fly / you lookin' like you fell from the sky," are real lyrics in "Give It 2 U," whose phonetic spelling, by the way, makes me want to die. Hey Robin, 1995 called, they want their lyrics back. Then Knight sings about how he is going to, "light the fire that is burning inside." Ooooh, using fire as a metaphor for sexual energy — how novel. Also, hate to be the one to question this, but if a fire is burning, isn't it already lit? Guys, no one is impressed by your ability to blatantly plagiarize lines from the "How to write songs for dummies" playbook.

4) People Care About Your Genitalia

Not to pull a Kanye West and talk statistics, but I'm fairly certain that of all of the millions of people who have listening to these songs, about .002 percent will actually see Knight's or Thicke's penis. So, put more coarsely, we could really give a flying fuck about your macho need to advertise your size. In " Give It 2 U," Thicke sings, "Big dick for ya / let me give it to ya." In my experience, men with sizable genitalia don't need to tell everyone about it. Know why? Because they know they are packing, and that's enough. Also, I'm sure that Thicke has been waiting his entire career to use the line, "Got a little Thicke for ya." Now in fairness, Knight only references his dick, like, 15 times, but he doesn't outright say "I have a huge dick / here it is / worship my dick" or any other variation that Robin Thicke has absolutely zero compunction using.

All of these parallels show us one obvious fact: Men who want to give it to us are all the same thing — sleazeballs. Come up with some new lines bros, and we might consider your sketchily offered penis-presents. But, until then, you can try and give it 2 us, but we r going 2 give it right back.

More like this
What Makes A Sally Rooney Sex Scene So Hot?
By Samantha Leach
Kanye West Rapped About Feeling That His Kids Are “Borrowed” From Kim Kardashian
By Brad Witter
BTS Is Visiting The White House To Discuss Anti-Asian Hate Crimes With President Joe Biden
By Jake Viswanath
Harry Styles Performed A Snippet Of Taylor Swift’s “22” & The Crowd Went Wild
By Jake Viswanath
Get Even More From Bustle — Sign Up For The Newsletter