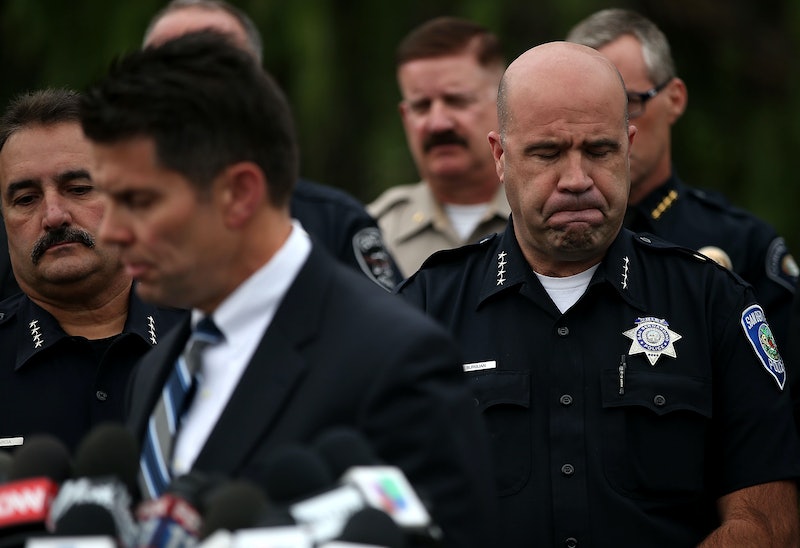 In the wake of recent tragedies, have you seen, maybe, an illustration of a bear hugging California? What about that sketch of the Eiffel Tower in a peace symbol after the attacks in Paris? These illustrations went viral mere hours after the attacks in each case, probably because images have a way of capturing a kind of pain ordinary expressions of grief might not be able to. In an essay for New York Magazine, Kyle Chayka posits that posting an image is increasingly used by people to express grief because actually saying something during a time of tragedy can give an opening for someone to get in a fight with you over social media.

Of course, even these visual expressions of grief projected to the world via social media seem crass to some — people changing their profile pictures on Facebook to the French flag didn't resonate with everyone. Still, the feeling to share something, anything, is hard to overcome. "We’re conditioned now to perform our emotions and reactions on public platforms, and the experience of watching horror on the news can give rise to a peculiar sensation of alienation and helplessness that can sometimes only be cured with small, seemingly meaningless actions," writes Chayka, linking to The Onion's beloved post-9/11 piece “Not Knowing What Else to Do, Woman Bakes American-Flag Cake.”

One downside to sharing these images, apart from people accusing you of insincerity or vacuousness, is that oftentimes, the artist who created them gets erased from public consciousness (and sometimes, the images are mis-credited entirely). It's worth remembering not just the images themselves, but also where they came from — so here are the stories behind some of the post-tragedy viral images we've seen recently.

This image, featuring the bear from the California state flag, was actually made in 1913 as an illustration on sheet music for the state song "I Love You, California." In some versions of this, according to Chayka, someone overlay text saying "Pray for San Bernadino." The misspelling of the town's name is unfortunate, but the image is powerful nonetheless.

This sign was everywhere after the Paris tragedies. Some people speculated that Banksy was behind it; however, it was actually the work of a French illustrator named Jean Jullien. He doesn't care about the credit, though. "It’s an image for everyone," Julien told Slate. "It’s not my image — it’s not a piece of work that I’m proud of or anything — I didn’t create it to get credit or benefit from it. I just wanted to express myself, and from experience I know that through social media people like expressing themselves, or need to express themselves."

When this image first went viral, it was often attributed to Banksy (sensing a pattern?); actually, it was the work of the artist Lucille Clerc. She said she wasn't upset about the confusion.