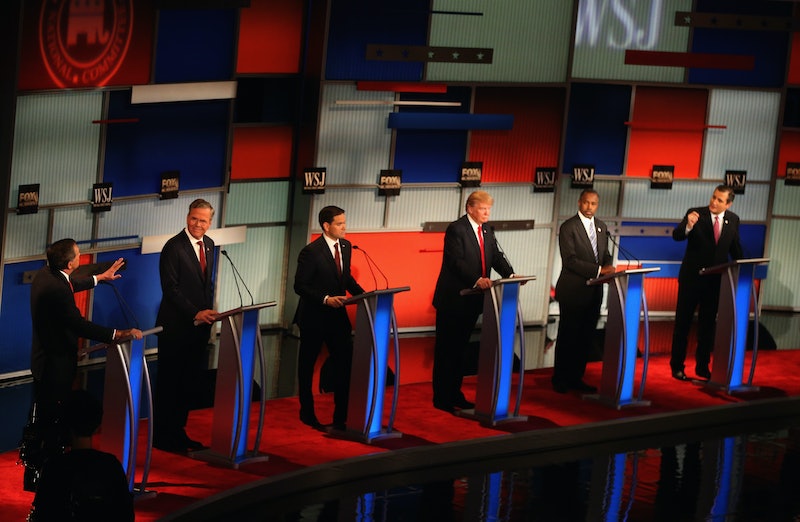 The fifth GOP primary showdown is looming on the horizon and with all the hustle and bustle of the holiday season, scheduling time to actually sit down and watch it is a task in and of itself. Thankfully, CNN (who's hosting the event) has taken care of that problem for you. Whether you'll be too busy scrambling to finish shopping or decorating the tree to turn on the television, you can watch the next Republican debate right from your laptop, tablet, or smartphone, thanks to a steady livestream from CNNgo, the network's online television service.

Worried that you don't have a subscription? Don't sweat it. You won't need to authenticate your cable provider to tune in when the stage is lit at 9 p.m. ET on Tuesday, Dec. 15. All you need is access to the CNN home page or the ability to download the CNN mobile app. From there, you'll be directed to a specific CNNgo link where you can watch the madness unfold, wherever you happen to be at the time.

For busy viewers, the livestream is a blessing — but it comes with a few perks for the cable news network as well. "We are offering this as a preview," CNN's head of U.S. editorial operations and worldwide digital content Andrew Morse told Mashable back in September, just prior to the outlet's first GOP debate. "To me, there’s a longer play here, which is that we want our audiences to know this is a service they can get from CNN going forward."

Despite what's predicted to be a huge viewer turnout, the news network is taking everything in stride, buffing up and making sure that no major technical glitches arise this time around, like what occurred at the Sept. 16 GOP showing. While the company hit record highs in terms of online viewership (senior media correspondent Brian Stelter reported a total of around 1 million concurrent viewers in a tweet that same evening), at least a handful of social media users reported that a wave of interruptions and delays had soured the experience altogether.

Luckily for CNN, the network managed to fine-tune its system enough in the days that followed, airing additional livestreams of subsequent primary showdowns, including the Oct. 13 Democratic debate, which went off largely without a hitch.

Of course, glitches in the stream aren't the only thing CNN brass will have to look out for this time around. As reported earlier in the week, candidate and front-runner Donald Trump had previously demanded $5 million just to show his face at the Dec. 15 get-together, which he claimed would be donated to a charity benefiting veterans (and to which the network heads said, "... Nah"). By Thursday, Trump had caved, saying he would be present at the debate if invited, given that the event was too valuable to miss.

"When you're leading in the polls, I think it's too big of a risk to not do the debate," Trump told The Washington Post in a statement. "I don't think I have the kind of leverage I'd like to have in a deal, and I don't want to take the chance of hurting my campaign. So, I'll do the debate."

To make things less complicated and ease the impending onstage stand-off, perhaps CNN could get an iPad for Trump so that he could just watch the debate livestream using CNNgo like everyone else.