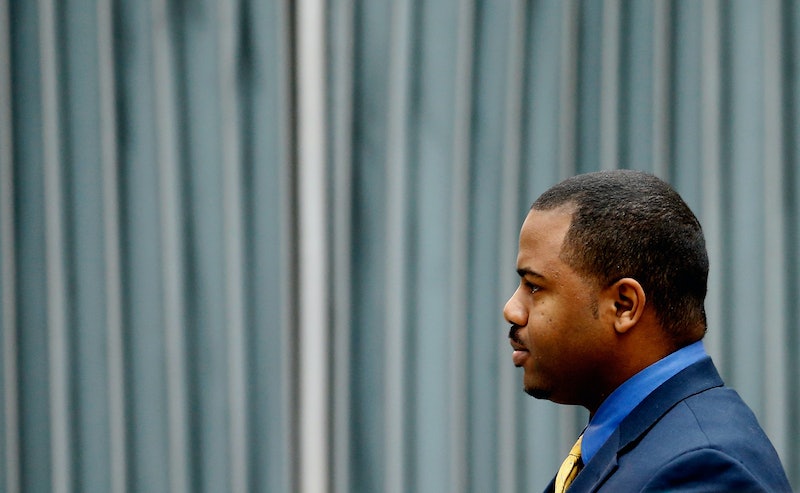 A videotaped statement played in court on Friday alleged that Baltimore resident Freddie Gray told police he needed help after being arrested by police in April. Officer William Porter’s said in a taped interview that the 25-year-old Gray pleaded with officers for assistance just before being placed in the back of a police van, shackled but not wearing a seatbelt. Gray was later hospitalized for a broken neck and died of his injuries one week later.

"I need help, I need help," Gray told Porter, which the officer recounted to internal law enforcement investigators. Porter, one of the officers charged in Gray's death, then said that he had asked Gray if he "needed a medic," to which Gray replied, "Yes." The officer’s account of the afternoon appeared to vary slightly between his first April 17 sit-down with investigators to their second meeting (both of which were shown in court on Friday).

According to Porter, who prosecutors allege did not call for emergency medical assistance right away, the officers involved had no reason to believe they had made the wrong call. "The medics rarely respond when people are in the wagon," Porter told investigators in the tape, claiming that Gray had "faked injuries" before. "There didn't appear to be any... circumstance to get a medic at that time … It was always a big scene when you tried to arrest Freddie Gray."

As the Los Angeles Times reported, Gray had a police record of various minor crimes and drug charges and had been listed in at least five open criminal cases at the time of his death.

On the morning of April 12, however, Gray surrendered voluntarily after being stopped by police, despite initially fleeing on foot "unprovoked," according to police documents. It wasn’t until Porter said he placed Gray in the van that the young man made any sort of protest. "I asked him multiple times, 'Why do you need a medic? What is wrong with you?' And he kept saying 'I need a medic,'" said Porter in his videotaped testimony on Friday. When Porter finally did call for medical assistance five stops into their drive to the police station, it was too late.

"I opened the door [to the police van] myself," Porter recalled. "[Another officer said] ‘Oh s***, we need to call for a medic’ — and I pick him up and he looks unconscious, so I call a medic."

Porter also said he had believed Gray was experiencing an "adrenaline dump" and "seemed tired" and lethargic because he "kicked the wagon so much," though prosecutors had previously alleged that Gray’s behavior was consistent with someone who had just taken a dive headfirst into a shallow pool of water.

"[It is] not an unforeseen event that a vulnerable individual was injured during operation of the vehicle, and that without prompt medical attention, the injury would prove fatal," wrote Baltimore Assistant Medical Examiner Carol H. Allan in an autopsy report obtained by The Baltimore Sun this past June. "Reportedly, Mr. Gray was still yelling and shaking the van [by the second stop, but] he was removed from the van and placed on the ground in a kneeling position, facing the van doors, while ankle cuffs were placed, and then slid onto the floor of the van, belly down and head first, reportedly still verbally and physically active."

The case could be made, perhaps, that Porter’s assumptions that Gray was simply “faking” his injury were valid, given that he seemed to be active during the initial stages of transport. But Porter admitted he hadn’t restrained Gray using a seatbelt, which could severely hurt his defense. Despite the defense’s rush to claim that Porter was a newer officer who simply “hadn’t read” the rulebook on suspect transportation, the damage was done.

“The arrestee is secured with seat and restraint belts provided,” Officer John Bilheimer said in court on Friday, reading from the police manual he said he used while training Porter. “We do not transport injured people.”