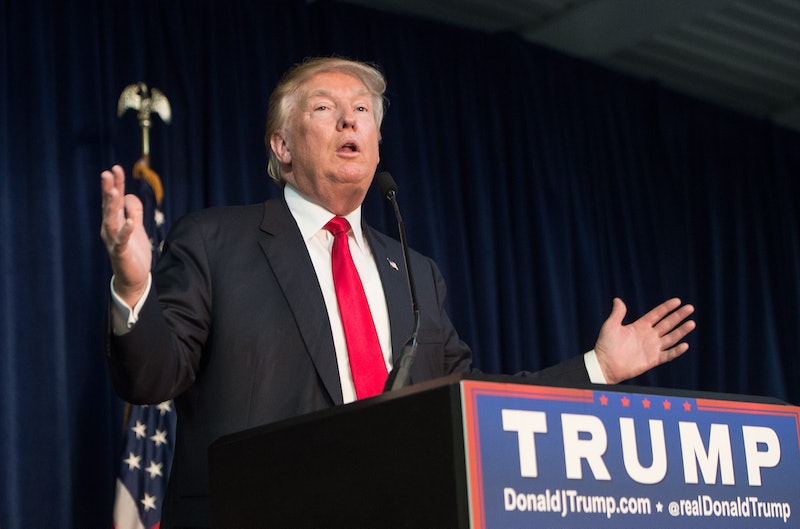 On Friday night, during a packed rally in Raleigh, North Carolina, Republican presidential front-runner Donald Trump was met by two familiar reactions: thunderous adoration from his fans and supporters, and righteous outrage from protesters. Over the course of a more than 50-minute speech, Black Lives Matter protesters interrupted Donald Trump over and over again, as detailed by Talking Points Memo.

Trump's supporters, needless to say, were not amused. The interruptions triggered waves of hostility, with loud booing, and occasional chants of "U-S-A!" This is exactly the kind of reception the protesters had to anticipate, of course — Trump is the Republican candidate who has arguably been the most openly hostile towards Black Lives Matter, though New Jersey governor Chris Christie could give him a run for his money.

His bold position has seemingly had an impact on at least some of his supporters, as well — in November, reports and video emerged of a black activist named Mercutio Southall Jr. being beaten up at a Trump rally. Southall Jr. later alleged that he was showered with racial slurs and shouts of "all lives matter" while he was on the ground. Trump's response, when questioned about the incident on Fox News: "Maybe he should've been roughed up."

In other words, there's perhaps no more credibly threatening environment on the campaign trail for a group of black activists than a Trump event. To protest him anyway is an considerable act of courage.

Trump occasionally commented to the crowd as the interruptions continued with comments like "don't worry about him, we'll do this quick," and "isn't it a shame, look at this, thousands of people are pouring in, and we have to get rid of one person, he's wasting our time." The interruptions didn't stop coming, however — according to WNCN, Raliegh's local NBC affiliate, the speech was interrupted no less than five times, causing some smirking silences from Trump while he gestured for security.

It's no surprise to see Black Lives Matter activists organizing this kind of protest. They've made their presence felt at political events and rallies before, though some of the most visible incidents have occurred on the Democratic side of the presidential primary. Specifically, activists staged demonstrations at a pair of Bernie Sanders speeches in July and August. In the latter case, a Sanders rally in Seattle, the protest was met with a large amount of anger and outcry even in front of such an ostensibly left-wing crowd. Democratic front-runner Hillary Clinton has been similarly targeted by protests.