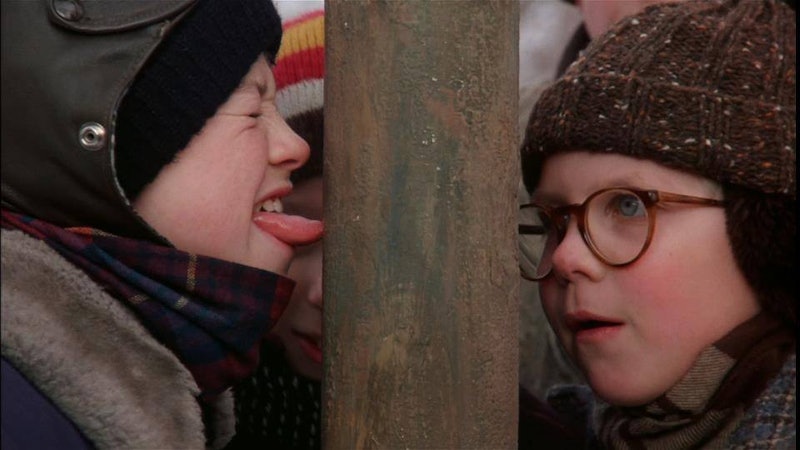 Everyone has their favorite Christmas movie that they absolutely must watch during the holiday season — whether it's Love Actually, Bad Santa, Elf, Home Alone, or a movie I've never even heard of. One of my personal favorites is the cult classic A Christmas Story, and though it is such a random movie, that's actually what makes it a hilarious must-see for me during December. If you feel the same way, then you totally know that there are certain things that people who are obsessed with A Christmas Story understand. The 1983 movie contains so many little jokes, which have endured over the years.

In case your memory is foggy, A Christmas Story famously follows nine-year-old kid Ralphie in his quest for a BB gun for Christmas and all of his misadventures with his family. The film didn't do very well upon release in 1983, but has since grown into a Christmas classic as it's been aired on TV for more than 30 years. In the '90s, it was shown during the holiday season at an increased rate, so much that by 1997, TNT (and later TBS) began running a 24-hour marathon of A Christmas Story on Christmas Eve and Day — a beloved tradition appreciated by millions of viewers each year. In 2014, both TNT and TBS aired the movie marathon, showing the love for A Christmas Story is bigger and better than ever.

And if you're as obsessed with the movie as I am, here are some of the things you'll totally understand.

1. You Always Fight The Urge To Lick Anything Icy Because You Know What'll Happen

And you do not want it to happen to you.

2. You Can't Help But Pronounce "Fragile" Like Ralphie's Dad

I don't know about you, but anytime I see "fragile" on a box, I say "fra-geel-lay" in my head and laugh, remembering that "It must be Italian."

Winter is here and that means you gotta bundle up like there's no (warm) tomorrow. Some of those large coats, scarves, and hats leave us somewhat immobile, just like little Randy, but hey, it must be done.

4. You Wish You Could Stand Up To Your Bullies Like Ralphie Did

I'm not saying kids should beat up each other after trading insults, but Ralphie was able to do a lot of things kids are scared to do: Stand up to his main, mean bully. Even some adults are too scared to stand up to their own bullies. Ralphie did what he had to do in the moment to draw a boundary with his nemesis.

5. You Have Ralphie's Teacher Fantasy After Every Paper You Turn In

6. You're Tempted To Buy Your Own Hilarious Leg Lamp

Ralphie's dad gets a "major award" that turns out to be a majorly hilarious, gaudy leg lamp and he can't help but be super proud of it.

7. You Feel Exactly Like Ralphie If You Curse When You're Not Supposed To

In church, in front of your boss or teacher — the shame is real.

8. You'll Never Say "I'll Wash Your Mouth Out With Soap" To Your Kids

9. Even In 2015, You Feel As Tricked By Marketing As Ralphie Did With His Decoder Ring

It's always so disappointing to learn that something cool you love is just being use by a company to sell something to you — and you know that even happens on the Internet in 2015.

10. You Wish Every Visit To A Mall Santa Had A Cool Slide

Too cool. How come none of the Mall Santas I ever visited had a fun slide?

11. You Have SO MANY QUESTIONS About The "Tin Man" Kid

Where did he come from? Why is he talking to Ralphie? Just how much did he like The Wizard Of Oz? Why does he like the Tin Man so much that he's compelled to tell the world? Is he going to ask Santa for a Tin Man-related gift?

12. You'll Never Dress Your Kid Up In A Fluffy Bunny Costume

13. You Know To Heed Warnings Like "You'll Shoot Your Eye Out"

Everyone tells Ralphie this throughout the movie — and then it actually comes true when he finally gets his Red Ryder BB gun! And that's why we should all listen to older, wiser adults.

Because you are truly sacred you might shoot your eye out. This world could also use less guns.

15. You Often Wonder If Soap Poisoning Is A Real Thing

According to Healthline, soap poisoning is real, but blindness won't necessarily result, like Ralphie fantasizes.

17. You Secretly Always Wanted To Have Christmas Dinner At A Chinese Restaurant

After their Christmas dinner is ruined, the Parker family heads to a Chinese restaurant to celebrate and they wind up having an awesome time anyway, because they're with each other. And isn't that what Christmas is all about — having a great time with your family no matter where you are.

And if you love this movie, you get that, big time.