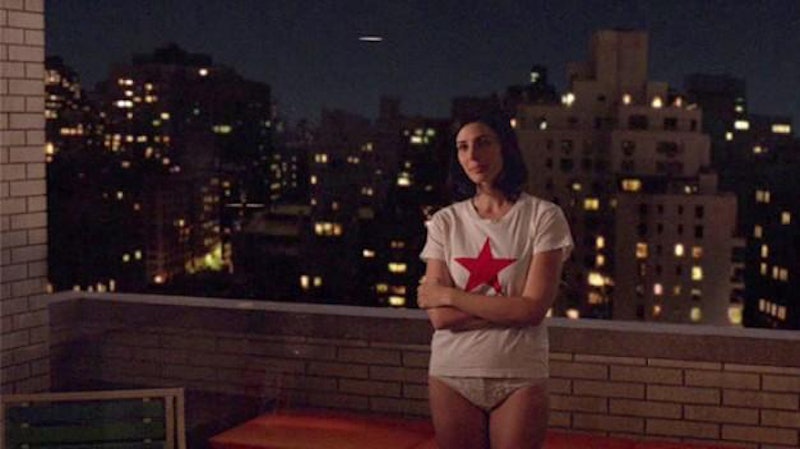 Mad Men is a conspiracy theory monger, which makes sense because it's one of the most carefully crafted and carefully guarded shows on TV right now. If you ever need to tell someone a secret, tell Matthew Weiner because he'd never share it, not even with you if you forgot it later. The most recent Reddit-fueled glee about Don Draper's second wife Megan Draper (Jessica Paré) as a stand-in for Sharon Tate has me wildly uneasy, though, and I really hope that's not where Weiner and co. are heading with Season 6. (And we have no way of finding out — Jessica Paré remained mum when she was recently asked about whether her character's life would mirror Tate's.)

The damning evidence showed up in last week's episode, "The Better Half," when Megan and Don are talking on their balcony and the sirens below in the city grow increasingly louder. Megan is wearing a white tee shirt printed with a large red star, which the Internet immediately recognized as one that Sharon Tate wore in an Esquire photo shoot in 1967.

WHY I HATE IT: The lowness towards the ladies on Mad Men is getting old, man. While I will agree that Mad Men is one of the most feminist shows on television and truly an homage to the era it portrays, I just want some of these horrible dudes to get their just desserts for once instead. Last season we witnessed the horror of workplace politics and the sleazy chasm between the rise to the top re: women and men. "The Other Woman" is one of the most beautifully sad episodes of television I've ever seen — if you've forgotten (but how could you?), it's the one where Joanie is more or less prostituted to the Jaguar exec in exchange for a partnership. Coincidentally, this is the episode where Peggy left Sterling Cooper Draper Pryce. (And now's she roped back in. You tried, girl.) Meanwhile, Pete was like, "I want a partnership," and the higher-ups were like, "Well... you're a weasel, but okay!"

What bothers me is this... pervasive desire from audience for Megan to be murdered. The year 1968 was absolutely mired in violence — the Vietnam war rages on, student protests are erupting, MLK is assassinated. New York is hot and the pavement's boiling with unrest. True, all true. But I don't want the culminating crescendo to be the death of Megan Draper, a character who I hated at first, then loved, and now feel overwhelming sympathy and empathy for. I love Megan. Kill Don instead, Matthew Weiner.

Okay, don't kill Don. But don't kill one of the most interesting women on the show. Don't give people the satisfaction of seeing her die. Because Mad Men needs all the great women it can get. Get rid of one of these men instead! They're basically all bad! Except perhaps Bob Benson, but the conspiracy theories circulating him already include "murderer" so who knows. And for more selfish reasons: Janie Bryant, Mad Men costume designer/ goddess, has given Megan the BEST wardrobe of all the gals, and I don't want to lose it.