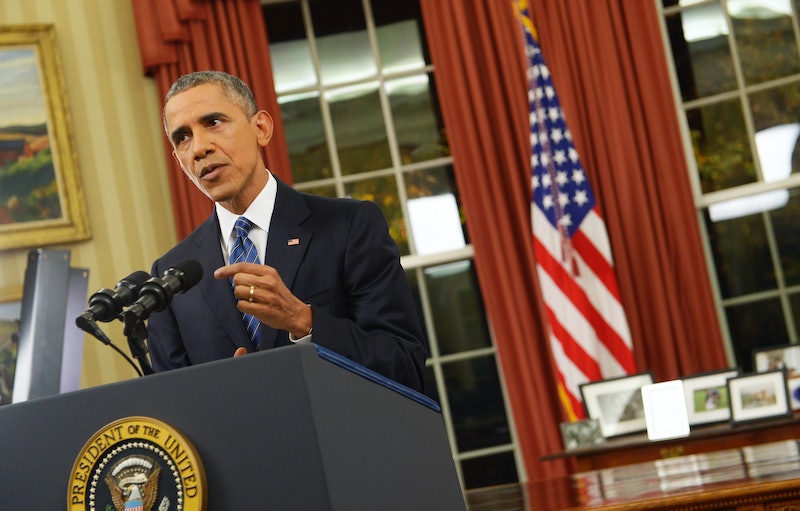 In his Sunday address from the Oval Office, President Obama once again ruled out sending ground troops to fight ISIS in Syria (at least, substantial numbers of ground troops — there are already limited special operations forces in both countries). Unfortunately for Obama, the majority of Americans want the U.S. to launch a ground invasion to take out the terrorist group. Nevertheless, the president is right to stay the course, because sending ground troops to fight ISIS is an awful idea that would accomplish far more harm than good.

To be clear, the problem isn't that the U.S. military can't take and hold territory in Syria, which is what a ground invasion would seek to accomplish. The U.S. has the ability to do this, just as it had the ability to take and hold territory in Iraq in 2003. But U.S. ground forces in Syria can't eliminate ISIS as an organization. In fact, they would help the terrorist group. ISIS wants the West to send ground troops to fight it, and such an invasion would help the group immeasurably in its recruitment efforts.

ISIS has recruited a staggering number of members from around the world. One way in which it attracts new members is through its official magazine, Dabiq, which it produces and releases online monthly. It's a surprisingly slick and glossy production, and one thing that the publication makes abundantly clear — over and over again, in every issue — is that ISIS wants the U.S. to invade Syria, because it will fulfill a major part of the religious prophecy to which it subscribes.

The reasoning behind this is somewhat complicated, but it all comes down to the group's ideological and religious beliefs. In short, ISIS wants to bring about the end of times and believes, based on an ancient Muslim prophecy, that this will only happen after western armies are defeated by Muslim fighters in battle in a specific region of northern Syria — the town of Dabiq, from which the magazine gets its name.

This belief is articulated clearly and explicitly throughout Dabiq, and it's presented as something that will inevitably happen after the reestablishment of the caliphate, which ISIS claims to be. This matters because if the U.S. or other western nations were to invade Syria, it would confirm that ISIS' prediction is correct — and that would be a huge boost to the group's recruitment efforts, because it would prove, to some prospective members, that the group's religious prophecies are actually coming true.

As many journalists and Middle East experts on the Middle East have attested, ISIS' apocalyptic vision is essential to its ideology, and an effective component of its recruitment pitch. From this perspective, a U.S. invasion of Syria would give the group exactly what it wants, and would in fact make it easier to recruit.

Critics would argue that none of this matters if the U.S. military is able to take out ISIS strongholds in Syria, as that would effectively defeat the group. But that's only true if America is willing to occupy Syria indefinitely. As the war in Iraq and subsequent rise of ISIS demonstrated with painful clarity, ISIS is very good at moving into territory once held by the U.S. military, whipping up support amongst the locals, and then proclaiming itself the new kings of the land once America is gone.

ISIS' recruiting prowess is no joke. The UN Security Council estimates that 15,000 people have moved to Iraq and Syria to join the extremist group, while U.S. officials put it at 20,000 — and that's not even including locals who joined the group while already in one of those countries. Sending U.S. troops to Syria would be a huge boon to the group's ability to attract more members — and once U.S. troops withdraw, ISIS would be stronger than it's ever been.