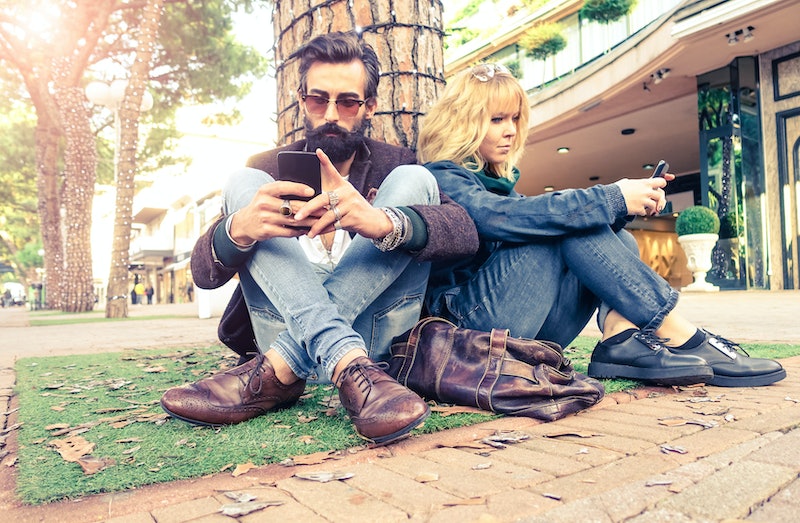 The navigation of social media is a necessary skill to have as a person living in this culture, and its is an incredible innovation — I point to the grassroots activism and political revolution that it births every time an older person tries to convince me that it's all clickbait. However, it can also create some very damaging habits, especially when it comes to how social media affects romantic relationships. According to the Pew Research Center, 65 percent of American adults use some form of social media. That means there is a pretty high chance that both you and your partner are on social media, and there is also a pretty high chance that you probably have multiple social media accounts (Facebook, Instagram, Tumblr, Twitter, Snapchat... kik? Is kik a thing that adults use?) So what are some signs that social media is negatively impacting your relationship?

There has actually been a lot of research done about unhealthy social media patterns in romance, dating, and long-term partnerships. In 2013, the University of Oxford's Internet Institute found that the more social media networks or channels used by a partner, the unhappier each partner was in the marriage. The study observed 24,000 married couples, and those who used more than five different networks "reported a 14 percent drop in marriage satisfaction." A press release for the study states, "This work suggests that media, which now includes online social media, still operates as a signal of ties of strength in relationships... However there may be a cut-off point after which the increasing complexity of maintaining so many separate communications threads starts to undermine relationship ties."

Another study, published in The Journal of Cyberpsychology, Behavior, and Social Networking, also found a direct correlation between high Facebook usage and increased relationship conflicts in couples that have been together less than three years. It is important to note that the data only revealed this to be true for partnerships less than three years old. After all, it is within the early stages of romance that many people find themselves nervously obsessing over a partner's every move since there is not yet a lot of stability or security in the relationship. And it seems like that behavior may be self-sabotaging.

Couples can use social media to genuinely profess love and organize their memories and milestones. But what are some signs that you and your partner are using social media in an unhealthy way? Here are some things to look out for:

1. Telling Social Media All Of Your Business

When you and your partner get into an argument, can you expect to see the problem cryptically (or maybe blatantly) described in status updates, Instagram posts, and the like? Do you broadcast to your 632 Facebook friends that your partner was rude to your sister instead of directly confronting your significant other and resolving the issue? Or does your partner tweet that you are always late instead of expressing their feelings privately?

Not only is this problematic because it means that issues are not being communicated and dealt with in reality, but I think that by this point in our technological society, we all know that what we post on social media isn't really private (even if our privacy settings make us think we are in the clear). Any negative information that you or your partner post about each other can easily be found by employers, co-workers, relatives, and friends — potentially damaging prospective job opportunities and important relationships.

If trust exists within the relationship, then there is no need for snooping your partner's pages on the reg. If either you or your partner regularly stalk social media to verify a partner's whereabouts or gain insight into their mood/behavior, that means there is both a lack of trust and a lack of communication. Why don't you believe your partner when they say that they are working late? How come you turn to Instagram for clues when your partner seems distant, instead of directly asking what they are thinking?

Additionally, frequently tracking your partner's social media activity can create jealous thoughts that possibly wouldn't otherwise exist. Russel Clayton, doctoral candidate at the University of Missourri and lead author of the research published in Journal of Cyberpsychology, Behavior, and Social Networking, told Women's Health, “Previous research has shown that the more a person in a romantic relationship uses Facebook, the more likely they are to monitor their partner’s Facebook activity more stringently, which can lead to feelings of jealousy.”

It is important for all of us to keep ourselves in check with this habit. It's not only common to do in a current relationship, but also to past partners. The Pew Internet and American Life Project found that 48 percent of people on social media between ages 18-29 (almost half!) "check up on someone they used to be in a relationship with." Now, that's really not necessarily that big of a deal to do once in a while (nothing wrong with a little curiosity), but if done obsessively, that means you are taking time away from your current relationship or subconsciously looking for conflicts that have no reason to begin.

3. Checking Who 'Likes' Each Others Posts

Keeping tabs on the random people who 'like' each others posts is an invasive and unnecessary waste of time. I think we all have that random dude from eighth grade life science class who bizarrely 'likes' everything we post — even though the posts are of no relevance to his life and you never actually speak to one another. Some people are just really active likers. If you or your partner check each others posts multiple times a day to monitor all new 'likes' as they come in... honestly, what's going on?

That is all time that could be spent working toward your goals or actually speaking to each other about relationship concerns. If there is a genuine problem regarding fidelity, that should be communicated instead of monitored through social media. Most of these unhealthy habits really stem from choosing to incorrectly interpret social media instead of talking to each other like respectful adults and partners. If using social media is the only way to get the truth, then this relationship is toxic and should end anyway.

4. Secretly Logging Into Each Others Profiles To Read Private Messages

If this is what you or your partner have to do in order to feel secure about the state of the relationship, something is probably very wrong in the communication and trust department. Either you or your partner need to evaluate individual confidence and insecurity issues, or previous conflicts have not been resolved and need immediate addressing.

5. Scrolling Social Media Too Frequently When You're Together

Even if you or your partner are just absentmindedly clicking uninteresting links, it can still make the other feel secondary and underappreciated. Women's Health referenced author Christie Hartman:

Even if you’re just mindlessly scrolling through your feed while watching TV with your partner, it can give off the impression that they’re not as important to you, says Christie Hartman, PhD, author of Find the Love of Your Life Online. “Be aware of what you’re paying attention to,” says Hartman. “If they start complaining or showing annoyance, it’s a sign that you’ve gone too far.”

Unfortunately, we are kind of set up for this obsessive behavior, as explained by Harvard University's Psychology Department. The study, summarized by Huffington Post, says "...there is a biological reward that happens when people disclose information about themselves... Rewards were magnified when participants knew that their thoughts would be communicated to another person." Before we disclose information to our networks to gain that addictive rush, we should disclose information to our partners. And since we may be struggling against our biology in regards to this relationship obstacle, you can utilize these tips to help yourself avoid spending too much time on your phone.

I am often the friend that people call or text at all hours of the night when their partners do something terrible. I don't say this with any resentment; I am honored to be that person. I say this to explain that frequently, without having solved any of their problems, I will see them posting couple selfies with lovey dovey captions the very next morning. People are extremely into keeping up appearances on social media even when things are really falling apart. It is much more important to actually have a solid relationship ~IRL~ than have whimsical couple's profile pics — i.e. spend more time dissecting conflicts through conversation than choosing Instagram filters.